What does the good life look like in 21st century America? 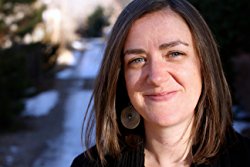 Is it still a single-family home and two cars, as it was for earlier generations? Or is there a “new better off” for millennials entering adulthood, one that emphasizes social connection and sharing over prosperity and ownership?

In The New Better Off: Reinventing the American Dream, Courtney Martin explores the changing landscape of aspiration and community in the United States today, one shaped by co-working, freelance careers, co-housing, and social media.

Martin is an author, social entrepreneur, and weekly columnist for On Being, with two TED talks and five books under her belt. She lives with her family in Temescal Commons, a co-housing community in Oakland—an experience that inspired The New Better Off.

We talked with Martin about her new book—and the prospects for a healthy community and economy in a time of transition and unrest.

Jenara Nerenberg: How did you find the focus of this book?

Courtney Martin: It’s funny, because when I set out to write this book, I was thinking of it far more in terms of individual pursuit of success and how are we re-defining how we individually achieve the so-called American dream.

But as I reported, I kept coming back to this theme of re-focusing on a collective definition of success and quality of life in this so-called dream. In 2013 I found out I was pregnant with my daughter and my husband got a job offer in the Bay Area, and we decided to take the East to West Coast plunge. And as I was doing it, we had the incredible good fortune of knowing someone who was leaving a co-housing community in Oakland.

So without really knowing what the arc of this book would be—we ultimately both ended up freelancing, moving into this co-housing community, having kids, seeking out co-working communities and collaborators that were outside the traditional workplace norms. So it really was a process of both reporting and writing the book but also living my own way into these answers in real time. So it’s political but also deeply personal for me.

JN: Is it actually a form of privilege, being able to piece together a freelance lifestyle in what some people call the “gig economy”? That might not be available to some people who don’t have a financial padding or supportive partner.

CM: Yes, one of the things I wish I could have handled differently is the chapter on money. The discussion around the $75,000 happiness plateau doesn’t take into account having a safety net. I think having a safety net and coming from privilege does impact being able to handle a freelance life. The hard part about it that doesn’t make it so cut and dry is that a lot of “traditional 9-5” jobs are also not that dependable either. There’s often no reliable schedule, no benefits, no unions. I don’t think traditional jobs have ever been so insecure, so the contrast is getting smaller and smaller.

JN: I feel like this book was really written for younger millennials, those who are just at the brink of thinking about their futures in terms of love, family, work, and spirituality. Did you have millennials in mind? What is your advice to them?

CM: I do think I wrote with a millennial audience in mind. There was a moment in writing this book when I wrote a letter to a 26-year-old friend, trying to figure out my voice and re-claim what I was trying to say, because she is my audience.

The funny thing is that since publishing, many millennials have told me they are buying the book for their parents because they feel it explains to their parents what they are doing and why they’re doing it in a way that they can’t. Parents are worried their children are making crazy choices—like super-involved fathers staying home or freelance careers—so it’s much easier to have a third party explain choices to parents, and I think the book is becoming a proxy for that.

In terms of advice, I would tell millennials to invest time in their relationships. The truth is those 22-year-old peers grow up to have influence, and professionally those relationships can create opportunities. Genuine networks—people you feel are actually invested in you—are way more important than figuring out exactly what you’re going to do. 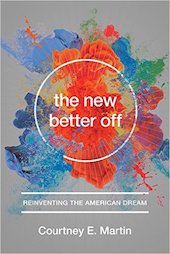 JN: Do they have any models for that kind of life?

CM: My not-so-covert chapter about work-life balance for fathers looked at the old model of leadership where everything gets sacrificed for work. We don’t do a great job of highlighting models where passionate work and commitment to family are both present. A lot of millennials are rebelling against that. People feel repelled by those sacrifices.

The truth is that economically we don’t have the policies set up to have work-life balance and it’s also in our culture. We worship at the feet of people who over-work. So what does it look like to collectively shift that, rather than chalk that up to individual people? I think it’s an unfinished shift and a lot of people are living into that right now.

JN: What’s catching your attention now, since the publishing of the book?

CM: One very obvious thing for me is what I call “the conversation under the conversation” that’s happening under the election—there’s so much rhetoric about the American dream and what it means and what Americans are promised. On a deep level, I think what voters are trying to understand is that they’re looking at their own lives and wondering, “Is this the life I was promised? Is the country supporting my best quality of life?” And I think a lot of people feel like it isn’t—and for good reason.

That’s leading to a lot of fear and blaming—and so for me that means how to re-structure the policies in this country so they actually do support people to live their best lives. But let’s also question the cultural narrative around what the best life means in America. Maybe it’s not getting rich like Trump. Does it look like he’s living the best quality of life for a human being? Not from my perspective.

So it’s interesting to be watching this election and think about how my book speaks to a lot of the things that are ultimately not being said by either candidate, because they’re below the surface—below the level of rhetoric.

JN: What research or insights that you came across make you the most hopeful or optimistic about our future?

CM: Living in co-housing has led me to do more research on this way of living—in a formal respect, with people owning their own homes and sharing common areas like kitchen, garden toolshed—and it shows that it helps on all these different fronts, especially America’s most pressing problems, like lack of care and housing options for our aging population, and for working families who are both psychologically and financially stretched.

For me that’s exciting—though this setup is still rare—but it does make me more hopeful and it seems like co-housing is the thing that people are really responding to with such enthusiasm in terms of the book and my TED talk. People are really seeking out different ways of living, so it’s just a matter of keeping up the supply with the demand.