I confess I’ve never read the bestselling book, The Secret. But its basic premise—repeated ad nauseam in cheesy self-help books—goes something like this: Visualize what you want in life and really believe it will happen, and you will attract it to you. Whether it’s wealth, health, or better relationships you want, the “power of positive thinking” is all that it takes to make it manifest.

But nothing could be further from the truth, according to Gabriel Oettingen, a motivation researcher at New York University and author of the new book, Rethinking Positive Thinking. Not only does Oettingen debunk the myth that positive thinking influences success, she makes the opposite case: that daydreaming about positive outcomes—based on nothing more than wishful thinking—can actually damage your chances of getting what you want in life. And she says she has the science to prove it. 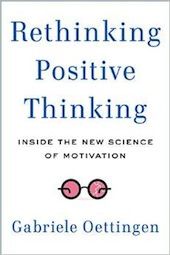 Oettingen distinguishes between optimism—positive expectations about the future based on past experiences—and positive thinking, which is based on little more than imagination or wishful dreaming. While the former has been correlated with better health and wellbeing, the latter has not. In fact, unless positive imagining is accompanied by considering the potential pitfalls to getting what you want, it’s worse than worthless in helping you to reach your goals.

A combination of dreaming and anticipating failure—which Oettingen calls “mental contrasting”—is important for motivation, setting in motion unconscious cognitive processes that are important in goal attainment. Mental contrasting, she argues, is particularly useful when pursuing a realistic goal, such as losing weight or improving a once thriving relationship, but is less likely to work if your goal is unrealistic, such as starting a business from scratch without any prior experience.

In one experiment, she and her colleagues asked college students to either write down positive fantasies about the upcoming week unfolding exactly as they’d like it to, or to just write their thoughts and fantasies about the upcoming week. Immediately after the exercise, the participants reported lower energy levels if they positively fantasized only than if they had a mixed view of the week. In addition, a week later the participants were questioned about how much they had accomplished during the week; the less energized participants had felt, the less they’d accomplished.

“These results correspond well with many people’s daily experiences, “ she writes. “In the face of a big challenge or chore, people often fantasize about how it feels to have achieved it. In the moment, the fantasy feels good, and it also feels relaxing—so much so that we don’t take action.”

It’s also important for goals to be realistic. In another study, Oettingen and her colleagues asked male computer science students to rate how likely it would be for them to get better at math, and to list four potential positive outcomes and four potential negative obstacles to achieving this goal. Dividing the students into three groups, the researchers asked students to either indulge in fantasies based on their positive outcomes, dwell on their negative obstacles, or engage in mental contrasting. Results showed that those students who thought they could improve in math and who used mental contrasting tried harder and achieved more according to independent teacher reports than those who indulged in positive fantasies or dwelled on negative obstacles.

Though Oettingen’s research is compelling, the sheer number of studies she reports on may leave readers immune to her findings at some point. But for those interested in applications of the research, you can skip ahead to where Oettingen takes her work into more practical realms. Combining her ideas with those of her husband and fellow researcher, Peter Gollwitzer, she writes of a motivation exercise called WOOP, which marries mental contrasting skills with action plans for goal attainment, and gives tips on how to use it.

Under the WOOP model, you work on goal attainment by:

Oettingen and her colleagues have developed a WOOP mobile phone app that has been used with kids in low-income neighborhoods to help encourage them to aspire to college, as well as an app that adults can use in their personal and professional lives. Research results have shown that employing WOOP is more successful than positive thinking alone in helping people to fulfill their desired goals.

But is positive thinking completely useless? Certainly not, writes Oettingen. Letting yourself daydream about an unlikely future can be helpful, particularly when you are in a situation that is inescapable or when you need to wait out a decision over which you have no control—to help you cope with anxiety and depression. It can also be escapist fun for everyone, and can be a pathway to exploring your deepest desires—especially when they are not obvious to you.

“The key is simply not to ask more of our fantasies than they can give us,” writes Oettingen. “We would be wrong to jettison our dreams, just as we are wrong to blindly assume that simply dreaming something can make it so.”

Though the research she presents is extensive, there are few experiments mentioned that are conducted by someone other than Oettingen herself, suggesting potential bias in the results. Certainly, her claims for WOOP would be much more convincing if more independent researchers had studied it.

Still, it’s refreshing to find a researcher taking to task bogus claims about “the secret.” Some may think it’s bad news that there is no simple pill or mindset that will make your life all work out. But the good news is that, with a little mental contrasting, planning, and determination, some of your (realistic) dreams may yet come true.