Sebastian Junger is a former war reporter, the author of several best-selling books, and co-director of the Oscar-nominated documentary Restrepo.

His latest book, Tribe: On Homecoming and Belonging, explores the loneliness and alienation of modern society and the haunting question of why soldiers miss war upon their return home. The book flips the script on PTSD, arguing that the isolation faced when returning home aggravates the trauma of combat, which raises the question of how to foster a sense of community and belonging separate from disaster or war. We talked with Junger about the causes and potential of communalism. 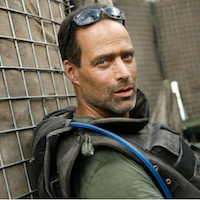 Jenara Nerenberg: What avenues do you see that can help cultivate a sense of community and belonging to minimize loneliness and alienation in our society?

Sebastian Junger: I think if we actively espouse an ethos of communalism that it would help. Communalism rises to meet the challenge of danger and hardship. It pops up spontaneously. But we live in a safe and more-or-less comfortable society, so we don’t need communalism—so we would have to actively espouse it. The tone of contempt used by our leaders and the lack of responsibility and culpability of those who have harmed our country very, very gravely contributes to the lack of community, as well.

JN: What forces have contributed to us losing that sense of communalism?

SJ: I think it’s affluence. Affluence, income disparity, the automobile. All of those things have made our society more individualistic and less communal.

JN: Why is it so important to get a sense of tribalism back?

SJ: Well, the book is really about communalism, shared resources, and egalitarianism. The title of the book is distracting. “Tribe” is a loaded word. There is an amazing book called Our Beleaguered Species by Elizabeth Crouch Zelman about the importance of tribalism to human evolution and survival and the danger that that same tribalism now poses in the modern world. She acknowledges its crucial importance to the rise of human society but the liability that it brings with it in a modern context.

I think she’s the last word on that funny duality of human groups. Once you form a group, you’re immediately forming another group that’s not in your group, right? There’s no way to form a group without creating another category of people that are not in your group, unless you make the entire human population your group, which is then a senseless distinction. Her book addresses that duality very well and should be widely read.

Communalism is what characterizes our evolutionary past—and when we’re forced back to that way of being, it seems to be deeply gratifying to people.

JN: How do you cultivate community and belonging in your own life these days?

SJ: I grew up in the suburbs, where there was no community at all. Now I live in New York City in a poor neighborhood and I feel like there’s something close to a neighborhood community, but it’s certainly not at the level of the Kalahari or Kung or somewhere like that.

JN: It sounds like you’ve accepted modern society the way it is and that it’s not really set up for communalism. Are you interested in exploring solutions?

SJ: I think there are solutions, but they’re just not acceptable to us. Widespread disaster would force communalism, but who would want that? Banning the automobile would do the same thing, but no one’s going to do that. I think there are plenty of solutions, but they’re not palatable to people. You’re not going to have your cake and eat it, too. You’re not going to have the luxury of your cars and air conditioning and planes AND the kind of close communal connections that a survival-level economy forces on people.

JN: So you don’t think the rise of co-living and co-working movements—developments like that—are notable?

SJ: Sure, I think small groups of people can function that way—communes in the 60’s and 70’s, for example—but if you’re talking about a society-wide transformation, I just don’t think that’s going to happen. But that doesn’t mean that small groups of people can’t create their own circumstances—of course they can. Old-age homes are communal societies. Platoons in combat are communal societies. At the micro-level, communalism does exist. But short of a large-scale disaster or banning the automobile, I don’t think it’s going to happen on a society-wide level.

JN: Where does this insight about the automobile come from? I didn’t see that in your book.

SJ: People often ask me what can be done. The automobile has given us the mobility that enables us to work 50 miles from where we live and enables us to be completely divorced from our immediate community. The Amish have banned the automobile and their suicide rate and depression rate is extremely low and it forces them to live within walking distance of their home—in other words, it reverts them back to their evolutionary past.

JN: Was suicide not common in previous tribal societies?