Many people around the world claim Americans have an unusually high opinion of themselves. But, according to a new study, accusations of narcissism may actually be a bit overblown.

Americans and non-Americans alike share “the belief that the typical American is grandiose, callous, and self-centered,” write a team of psychologists led by University of Georgia professor Joshua Miller in the Journal of Personality and Social Psychology. However, the same surveys that reveal that perception also suggests the average American may not be nearly as narcissistic as everybody thinks. 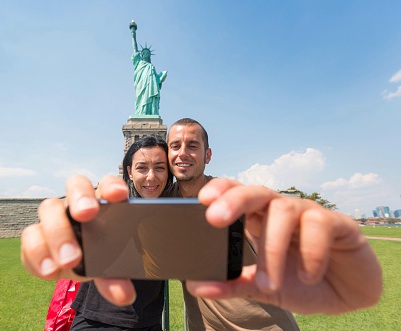 Psychologists and cultural observers have been fascinated with narcissism at least since the 1970s—the “Me Decade,” as Tom Wolfe put it—and the concern with narcissism hasn’t let up. In fact, it seems to be heating up, in part due to psychologist Jean Twenge’s somewhat controversial argument that young Americans today are more narcissistic than ever before.

Wholly apart from whether the population is getting more narcissistic, there’s a question of how Americans and others perceive citizens of the United States, which is where Miller and his team’s new study comes in. A total of 2,917 people took part across six surveys, including 322 University of Georgia undergraduates, 377 non-Americans who completed an online survey, and 100 adults recruited at a mall in Athens, Georgia.

While the details varied from one survey to the next, participants all filled out the Narcissistic Personality Inventory 16, a set of 16 questions designed to measure subclinical narcissism—that is, narcissism that falls short of the clinical definition. A frequent criticism of the NPI-16, however, is precisely that it doesn’t measure clinical narcissism. To address that concern, the team used other questionnaires, such as the SCIM-II, originally developed as tools for clinical psychologists to screen patients for narcissistic personality disorder. In both cases, survey takers answered the questions with respect to themselves, their acquaintances, and the average American, whomever they thought that might be.

“What opened my eyes in this work is that we see the typical American as incredibly narcissistic,” writes study co-author Keith Campbell in an email, although the results suggest that can’t be entirely accurate—either Americans aren’t actually that narcissistic, or the narcissists aren’t owning up to it.