New York Mets second baseman Daniel Murphy became an accidental advocate for work-family balance this spring when he missed two MLB games to attend the birth of his son. Radio talk shows and the Twittersphere erupted in confusion and outrage—but for Brad Harrington, the lead author of a new, large-scale study of working fathers’ attitudes, the controversy was a blessing.

“Dads and men are just too silent on work life and work-family issues, and I think what this did was really put this controversy or debate front and center in the eyes of the American public,” Harrington said in the opening remarks to a June 9 conference call with reporters and advocates about the Boston College Center for Work and Family study. 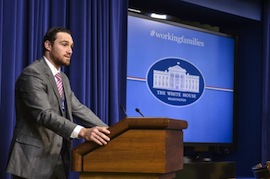 The report is the fifth in a series called “The New Dad,” and it focuses on the issue of paternity leave in particular: who gets it, how it’s used and how working fathers today perceive its importance.  The report finds that dads are starting to rank father-friendly policies with essentials like health and dental coverage—with good reason, according to new studies.

First of all, dads who spend at least a month home with their young children live longer than dads who don’t. Eighteen percent longer. As do their wives (a 16 percent advantage over mothers who don’t have a husband who stays home).

How could this be? A Swedish study analyzed the phenomenon over a 20-year period and uncovered the relationship between caregiving and lifestyle—when men became all that stood between their child and choking hazards, diaper rash, and open sewer grates, they tended to lay off the booze and bar fights. (Incidentally, dads at home is also good for the family income: For each month dad stayed home after birth of child, mom’s income rose 6.7 percent.)

The Boston College study reveals how men’s priorities are changing—and workplaces are changing in response. A decade back, librarian Mark Bodnar advocated for improvements to faculty leave policies at Simon Fraser University in Vancouver, Canada. His efforts resulted in moms and dads getting 95 percent of their salary while on leave—something he suggested was a key component to its adoption.

“Frankly, I believe that if this whole matter had been raised as a paternity leave issue, it would have gone nowhere,” he wrote in an email. “It needed the push of being about both parents (regardless of sex).”

Bodnar touches on an important barrier to workplace adoption of pro-dad policies that goes beyond the dollars and cents: stigma. It requires a cultural shift—both on the part of organizations and on the part of the men themselves. By positioning policy as supportive to all employees, employers can help men help their families. And help their organizations in the process.

So what can be done to make dads happy at work on Father’s Day?

Demonstrating a commitment to work-life balance can be a powerful tool in helping align employee goals with corporate ones. Why, after all, would we go the extra kilometer those who don’t care about us?

Julie Lesperance, the director of human resources and administration for the health products company, Ascenta, has a long history advising small and medium-sized businesses on HR policy. She reflected on Ascenta’s experience with taking a proactive approach to breeding a caring culture.

“We have employees who care about the products. We have employees who care about the families we’ve created. And it’s really, really rare that I have someone in my office that says ‘I’m not happy here and I want to leave.’ So it allows us to focus on the business,” she said. “Anytime you take a proactive approach to treating an employee well, you generally will reap the rewards.  It costs a lot of money to be dealing with turnover, and engagement is a very important cornerstone.”

That starts with listening. “Generally employees will tell you what’s important to them,” Lesperance said.  “If you just take a minute—it doesn’t cost anything—and if you’re genuine, it goes a really, really long way.”

Family means something different to everybody, she pointed out, so for employees to feel cared for, it’s important that their workplace acknowledges the stresses and excitement that surrounds whatever they’re embarking on – whether it’s a pending birth or an adoption process… or even a new pet.

2. Offer two to four weeks of paid paternity leave of at least 66 percent of salary 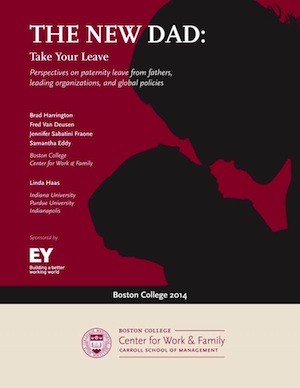 Read the new report from the Boston College Center on Work and Family, "The New Dad: Take Your Leave."

According to the Boston College study, fully 89 percent of respondents ranked paid paternity leave as important, very important, or extremely important in choosing a job and 86 percent said they’d only take the time if it were paid. Lucky for this cohort—which works for nine companies that have partnered with the Center to help research and develop informed policy—fully two-thirds of them have access to paid leave. Among the third whose employers don’t offer it, 91 percent said they would have taken more leave if it was available.

The average time taken off around baby’s birth was just over two weeks—a slight increase from their 2011 study and at the low end of the “ideal” range of 2-4 weeks cited by the study authors. Over three-quarters also voted for the ability to split or defer this leave—i.e., take some or all of it at a later date, rather than all around the time of the birth—because other supports like grandparents may be available sooner but not later.

How much pay is enough to encourage dads to take the leave? To paraphrase the Hitchhiker’s Guide to the Galaxy, the answer is… 66. Being paid, said Boston College Associate Director of Marketing and Communications Jennifer Fraone, is “almost required for [men] to take the leave…  [and] countries that offered lower-paying paternity leaves had a lower utilization than those that offered at least 66 percent of the father’s salary. It was a much higher uptake of the policy if at least 66 percent of the salary was offered.”

In the United States, the federal Family and Medical Leave Act does provide for 12 weeks of job-protected leave that can be taken by either parent, but it is unpaid. Only California, New Jersey, and Rhode Island have legislated more supportive policy at the state level. Given the option to abstain, employers have largely done so: According to the U.S. Labor Department, only one in eight jobs in the U.S. offer paid parental leave. Offering this benefit can be a real enticement, therefore, in the recruiting process.

The concept of “flexible work environment” now has a long history as employers have worked harder over the past 40 or so years to accommodate mothers returning from maternity leaves. Shorter work weeks, part-time options, tele-commuting, and generous sick-leave policies have all helped ease Mom’s return to work.

The tools are there—companies just have to extend them to the fathers on their payroll.

Key to successful implementation of flexible work conditions is trust. How can companies be sure that the employee is working when he says he is? Experts say the answer is that companies can’t. Instead, they need to set clear performance objectives or deliverables and hold Dad to account—and similarly, Dad needs to work extra hard to make the flextime feel worthwhile to his employer.

The Boston Center survey provided some additional insights into what “flexibility” means to today’s dads, something 95 percent of respondents rated as important. Those included varying start and end times to accommodate school drop-offs and soccer pick-ups, along with reduced work weeks and the ability to work from home.

EY Americas (which sponsored the Boston College study) applies that flexibility to how paid leave is taken and offers a coaching program to dads before, during, and after paternity leave—paternity leave that is paid for two weeks, six if Dad is the primary caregiver. EY Inclusiveness Officer Karyn Twaronite said, “Our male professionals at EY, like women, have to figure out how to integrate their personal and professional lives, too.”

Why should businesses bother with creating policies to make dads happier?

As social attitudes toward male parenting evolve, companies that fail to understand and address this need will miss a clear opportunity to engage their employees and will be at a competitive disadvantage in attracting and retaining talent. There are many benefits to helping male employees achieve work-life balance, many of which can be linked directly to the bottom line. It just takes a willingness to adapt your own thinking, be bold, and find ways to support men in achieving the balance they clearly desire.

As with any business decision, adopting proactive, “pro-dad” policies involves a series of variables that interact with each other. Funding extended health benefits, for example, racks up expenses every quarter but likely saves money in the long run when illness-related absences and turnover fall. The act of investing in your male employees’ families is comparable—but also pays dividends.

In stark contrast to the pillorying he suffered by critics for spending time with his newborn, Daniel Murphy spent Monday as a celebrated guest at a White House forum for working fathers.

“When Noah asks me one day, ‘What happened? What was it like when I was born?’ I could have answered ‘Well, Stephen Strasburg hung me a breaking ball that day, son, and I slammed it into the right-field corner,’” Murphy said in his address. “But I think it’s going to go so much further in that I’m the one who cut his umbilical cord. And long after they tell me that I’m not good enough to play professional baseball anymore, I’ll be a father.”