When the Pew Research Center released its new report on modern parenthood last week, the Southern California Public Radio show “Take Two” called to see if I’d like to comment on it.

“The report finds that dads are spending more time than ever with kids,” the producer told me over the phone. “But they still feel like they aren’t spending enough.”

I had just picked up my eight year old from school and we were both in my office. As I talked on the phone, my son jumped into my lap and said, loudly enough for the producer to hear: “I’m bored! Can we go home yet?”

The producer and I shared a laugh—he was a working dad, too. And of course, my son had inadvertently underscored the point of the conversation: Today’s dads are struggling alongside moms to fit paid work with family responsibilities. But even though our time with kids has tripled since the mid-sixties, the Pew Report finds that we’re two times more likely than moms to say we’re not spending enough.

This shouldn’t surprise us. Expectations for dads’ participation at home have risen steadily over three generations—but the need to make a living hasn’t gone away. As a result, many of today’s fathers feel caught between the pincers of home and work. Though moms have struggled on both fronts for decades, the juggle is new and shocking to men, as the Pew Study reveals. (Note: The Pew report only looked at heterosexual couples.)

To test this assertion, Google “how to be a happy working parent,” as I did a minute ago—the first 100 hits were targeted at moms. This suggests we as a culture haven’t given a lot of thought to the happiness of working fathers—and there are consequences to seeing work-life issues through a maternal lens, including a sense that a man’s individual problems represent personal, not societal, failures. When it comes to work-life fit, this is the message we hear as men: Suck it up.

But after I hung up the phone, I looked at my son and realized something important: After parenting for eight years and reading every peer-reviewed study I could find about work and family, I’ve gradually arrived at a place of equilibrium. Here are my 10 tips—drawn from a combination of scientific research and personal experience—for how to be a happy working dad. (This is part one, with five tips; here’s part two with five more.)

1. Find yourself a family-friendly workplace—and decide how much money that’s worth to you. 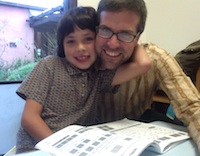 The author and his son doing homework in the offices of the Greater Good Science Center at UC Berkeley.

Formal policies permit a lot of flexibility, and our offices are adjacent to one of the university’s preschools, both of which contribute to a profoundly child-friendly atmosphere. My co-worker Emiliana breastfeeds her new baby during staff meetings; my son does his homework in the lobby.

When I was weighing this job against another that paid more money, I actually monetized that flexibility. How much was I willing to pay for the ability to pick up my son from school, take him to the dentist, bring him by the office? My answer was $5,000 a year. In other words, that’s the amount I was willing and able to sacrifice to be the working father I wanted to be.

Your answer will not be the same as mine, of course; different families have different values and needs. And in fact, your values and needs will change over time. What you need in one stage of parenthood might become less important as time goes on. If you find yourself feeling dissatisfied, ask yourself what you need right now—and then come up with a plan to get those needs met.

I recognize that I am extremely fortunate to work at an institution that offers, for example, paid leave and telecommuting options to parents.

In fact, only one out of 10 American men have access to paid paternity leave, and it’s perfectly legal for employers to fire a man for taking a day off to care for a sick child. Even when companies offer flextime, men (and women) can be informally penalized for taking advantage of it.

Sure, I have it good now—but I might not be so lucky at my next job. That’s why it’s in my long-term interest as a working father to advocate for family-friendly workplace policies. When I vote for a politician, I look at his or her record on family issues. I routinely sign petitions and speak out on behalf of policies like paid leave. This week, for example, Sen. Tom Harkin and Rep. Rosa DeLauro reintroduced the Healthy Families Act, “which would enable workers to earn up to seven paid sick days a year to take care of themselves or sick family members.”

Tellingly, advocates suggested supporters tweet about the act using the #StandUpForWomen hashtag, as if paid sick days were exclusively a mother’s concern. Yes, it is insulting to dads who take sick days for our kids. And yes, these are typically framed as “women’s issues”—but guys, that won’t change until we speak up. 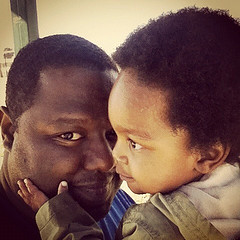 Will doing so make you a happier working dad? Actually, the evidence says yes—volunteering and activism bring substantial mental and physical health benefits.

I know… cutting commute times is easier said than done.

My family recently moved from San Francisco to Berkeley—which gave me two extra hours a day with my son and vastly reduced my daily stress. Unfortunately, just as we were moving, my wife got a new job in San Francisco. Now she’s the one who commutes, for two to three hours a day on public transit.

I tell this story to acknowledge that these days, commutes are hard to eliminate. But it’s a goal worth striving for: A 2011 study by researchers at Umea University in Sweden found that couples with long commutes are 40 percent likelier to divorce, largely because of the stress a commute causes.

So the more you can close the distances between your workplace, your partner’s workplace, and your kids’ school, the happier you’re all likely to be. This is another thing I monetized—I rated a commute as being worth $1,500 per year for every 30 minutes per day. So reducing my commute from 90 to 30 minutes is worth about $3,000 a year in pay, if given a choice.

Again, your exact number will be different—my colleague Elise puts it at $5,000—but try thinking about how much you’d pay to kill your commute. At minimum, you might find the exercise cathartic!

4. Get your team in place—and on the same page.

We don’t raise kids alone, and that’s especially true when both parents work.

As a working father, you need to see yourself as a senior manager in a department whose personnel will change over the years, but whose goal remains the same: to raise healthy, happy kids.

Who is on that team? There’s the other parent, to whom you might or might not be married. He or she shares authority with you, and you’ll need their buy-in on major decisions. To get that, you’ll need to cultivate skills like listening, empathy, negotiation, and compromise.

With the other parent, you’ll manage a progression of nannies, preschools, schools, afterschools, and summer camps. Budget permitting, you may also need to outsource certain functions, like housework and dog walking. Don’t leave all the details to your co-parent; instead, divide up responsibilities according to your complementary skills and interests, so that you feel involved and challenged.

Who else is on the team? Extended family, of course, as well as friends and social networks. In the first years of parenthood, join or form a playgroup for fathers. Don’t be afraid to ask for help, including babysitting; take the risk of confiding in friends when you feel overwhelmed. I met my friend Viru because he started organizing all-dad outings to museums and playgrounds. “You have to work very hard to have a community here,” he once told me. “It requires planning.”

5. Embrace flexible gender roles and the resiliency that comes with it.

When I was interviewing couples for my book The Daddy Shift, I found the happiest ones were those who weren’t hung up on ideas about what a man should do and what a woman should do. Mom didn’t look down on Dad if she made more money than him, and Dad didn’t waste time resenting the burdens of child care.

In fact, embracing flexible gender roles can make couples extremely happy—largely, I’d argue, because those beliefs are more adaptive to our 21st-century economic reality. “Given today’s precarious economic situation, the ‘happy working parent’ needs to be able to adapt and adjust,” said Baruch College sociologist Caryn Medved in an email, referring to a series of studies she conducted of two-income and reverse-traditional couples. “Gender flexibility allows, we argue, greater ability to successfully and dynamically balance work and family.”

And as the Pew study reveals, the roles and attitudes of men and women are indeed converging—men are developing more emotional and interpersonal skills; more women are going to school and to work. There’s a good reason why that’s happening. When layoffs can come at any moment, both partners need to be capable of making money and making dinner.

In other words, this flexibility and redundancy add up to greater resilience in the face of economic shocks—and it has the happy side effect of enriching men’s emotional lives and freeing both sexes from the prison of gender expectations. The point, guys, is that it doesn’t help to yearn for the good old days. We’ll all be happier when we can appreciate the positive changes and new possibilities that have emerged since our grandparents’ day.

This is part one. Here is part two, which looks more deeply at how to manage stress and your relationships.