When the pandemic first came to California and lockdowns were instituted, many of my neighbors set out to help each other. Some called elderly neighbors to be sure they were OK. Others collaborated with local restaurants to create a low-cost food delivery service, feeding people around the city while helping restaurants find a source of income during closures. Still others began a drive to collect masks for essential workers. 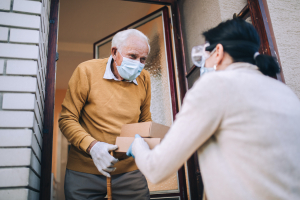 These acts of altruism warmed my heart. But what motivated some neighbors to step up to do this, while others didn’t? And is altruism enough when it comes to disaster relief?

Those were the questions at the heart of a new study published in Analyses of Social Issues and Policy.

To better understand how altruism emerged during COVID-19, the researchers analyzed 104 stories of altruism appearing in major newspapers and blogs that were compiled by Ball State University between April and October 2020. They wanted to see if any themes emerged around who the helpers were, why they stepped up, whom they helped, and what kinds of help they offered. The ultimate goal was to paint a picture of how people ally with each other when disaster strikes and how they expand their sense of community.

“We were trying to understand how people come together,” says lead author Selin Tekin. “We wanted to know what kind of strategies people used to support each other and how the wider community can support those most affected.”

While some of the stories she and her team analyzed came from different parts of the world—India, Australia, and England, for example—the majority came from the United States, so the results are somewhat American-centric. But the stories do give a picture of a phenomenon that’s frequently seen when disaster strikes.

How people stepped up during COVID

Here’s what Tekin and her colleagues found when analyzing the stories.

Who helped. Many people who helped others during the pandemic belonged to organizations, associations, and faith communities that generally provide help to others, although some were volunteers who spontaneously decided to help. And many were economically or physically advantaged.

It makes sense that organizations set up to provide assistance would do so during the pandemic, and many did, including Catholic Social Services of Alaska, for example. When it became clear homeless people in Anchorage would be at risk of catching COVID in crowded shelters, the organization searched for private places for homeless people to live and helped move them into safer quarters.

Others stepped up once they became aware that certain groups were disproportionately impacted by COVID. Those with greater economic resources gave more generously, while younger people tended to offer their labor. As an example, one Yale college student and his friend put together a group of 1,300 volunteers in 72 hours to deliver groceries and medicine to older New Yorkers and other vulnerable people.

Many people volunteered spontaneously, too, after seeing a pressing need. At one petrochemical plant, 43 employees volunteered to work 12-hour shifts for a month just to produce raw materials needed for face masks and surgical gowns. This kind of volunteer spirit was similar to what I saw with my neighbors—a response that is fairly typical, according to Tekin.

“There are always volunteers who are willing to help their communities,” she says.

Why people stepped up to help. The main reasons people chose to help were that they felt an emerging sense of identity with those most affected by COVID, they wanted to be an ally of disadvantaged groups, and they felt grateful for those risking their own health to help.

Research has shown that those who have a strong sense of “we are in it together” are more likely to help in a crisis than those who don’t, and that was true during COVID, too. In many instances, people expressed feeling a sense of identity with those who were suffering. For example, one artist in Los Angeles sent thousands of paintings of flowers to health care workers in New York City to let them know, “You’re loved by millions of people you’ll never meet. You’re not a stranger to anyone.”

There were also many examples of people wanting to help the disadvantaged. One café owner in Australia withdrew 10,000 Australian dollars from his bank and gave out $100 bills to people standing in line for the social security offices. In India, a group of women began cooking extra food for immigrant workers who were suffering during the lockdown.

In other cases, people wanted to express their thanks to those who were doing essential work during the pandemic. One neighborhood in Miami Beach organized an early-morning surprise for their garbage collectors, lining their street with people holding up signs and putting together gift bags, cards, and presents as a token of their gratitude.

Who was helped. The people most targeted for altruistic help were the elderly, those with health conditions or disabilities, essential workers, working-class people, or marginalized social groups.

For example, many store owners created special store hours when only the elderly or disabled could shop to reduce their risks of getting COVID. One woman created a mask that had a clear, plastic window over the mouth so that people who are deaf or hard of hearing could still use lip reading to understand those around them. When food insecurity rose during COVID, the FarmLink Project stepped up to deliver food that was being left unused at farms, delivering almost 240,000 pounds of food to food banks, and paid wages to farmworkers and other workers affected economically by COVID.

Some people donated money, cooked and distributed food, or ran errands for those who couldn’t leave their house. Others distributed masks to those who had trouble procuring them or offered free counseling services to those suffering emotionally. Still others made calls to lonely, isolated folks or participated in rituals aimed at thanking health care workers on the frontlines (like clapping from their balconies).

Of all of these findings, the latter surprised Tekin most. “I was fascinated by how, even if people can’t give any kind of material support, they show their gratitude; they show that they’re aware of the support that they are receiving,” she says.

She notes many working-class and ethnic minority populations were disproportionately affected by the pandemic and didn’t receive an adequate response from authorities. So, it was heartening to Tekin to see that, when confronted with an outside threat, people can choose to help, whether or not government authorities intervene.

“People share an emergent identity, a human identity,” she says. “Here, we saw people with more financial or material resources willing to share with the disproportionately affected. It wasn’t surprising, exactly, because we’d seen this in previous research. But it’s always interesting.”

Lessons for times of crisis

All in all, these patterns show that in a crisis, people do often step up to help one another. This is good news that can be obscured by news reports of less ideal behavior—like hoarding toilet paper or jumping the line for vaccinations. When there is a sense of common humanity—that we’re in it together—it can encourage more people to feel more moved to help.

“Even though the system is not structured in a way that everybody can receive the same amount of resources under the principles of equity, community members can come together and support each other,” says Tekin. “People just need to be aware of that.”

On the other hand, our altruistic impulses are not enough, says Tekin. As the pandemic drags on, people’s enthusiasm to give tends to wane, even though the need continues. To combat that, it’s incumbent upon community aid groups and government agencies to provide support to those who continue to suffer disproportionately, she says.

“You need change at the systemic level—policies that deal with injustice or that help community aid groups to be more sustainable, because they are usually the people who know their communities best,” says Tekin.

In the meantime, it’s good to see that people are usually capable of expanding their circle of care and stepping up to help.

“Though there is a gap between the advantaged and disadvantaged, there’s also support,” says Tekin. “People don’t always know what to do to help, but they’re willing to do something.”