At the close of the 19th century, Freud theorized that, like the mythical Greek king of Thebes, a child unconsciously wants to kill off his father so that he can have sex with his mother. He believed one of the main functions of psychoanalysis was to bring anger toward the parent into conscious awareness, and that this would free the client from symptoms. 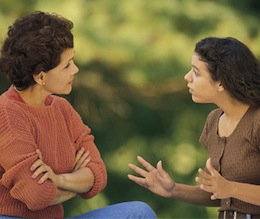 Today, only a minority of psychotherapists still believe in the centrality of the Oedipus complex or its female version, Electra, the mythological woman made famous by Sophocles and Euripides for plotting revenge against her mother. Yet a focus on anger toward one’s parents is still at the heart of many insight-oriented psychotherapies.

As psychologists and researchers, we think the emphasis on supporting ongoing anger and blame of parents is a problem in today’s psychotherapy and in the culture at large. Validating feelings and perceptions can be a helpful, even necessary, early step in healing from a difficult childhood. Learning how to shift from self-blame to rightful anger at our parents can be a useful second step.

What concerns us, based on the research on attachment in family relationships as it spans several generations, is how stopping at this second step may worsen the relationship with the parent and harm the long-term best interests of the individual and the extended family.

We believe that a new therapeutic frame to respond to adult children’s anger at their parents may be more beneficial in the long run—to the adult child, the parent, and the grandchildren. The same new frame is needed for those of us, clients or not, who hold firmly to the notion that parents are to blame for many psychological difficulties.

Our goal here is to describe some discoveries from attachment theory that may help therapists, clients, and others understand why it may be helpful to get beyond anger at your parents. We are not suggesting the currently popular strategies of “let it go and move on” or “forgiveness,” however useful they can be. Rather, we argue for the value of arriving at a fuller understanding of why our parents behaved as they did, so that we can avoid becoming trapped in old patterns and repeating hurtful relationship patterns in the next generation.

Anger and attachment across generations

One of the biggest dangers of carrying chronic feelings of anger toward a parent lies not simply in what it does to the relationship between us and our parents, but how it might affect our relationships with an intimate partner or our children.

Our own and others’ studies support the theories of John Bowlby, who argued that infants or young children who never felt securely attached to one or both parents can carry deep-seated insecurities into adulthood about whether they deserve to be loved or nurtured. This insecurity can have a profound impact on that person’s ability to love and parent. In other words, the opportunity to be securely attached as a child affects not only that child’s feelings of security and well-being, but his or her ability later in life to foster a secure attachment in his or her child.

In our longitudinal family studies, we looked at parents’ attachment stories and then at how teachers described their children’s behavior at school. We found that children with parents whose relationship could be characterized as insecure in relation to their parents (the grandparents) were more likely to be angry and aggressive with peers, or shy, withdrawn, anxious, or depressed—or both angry and anxious. They were also less likely to do well academically. How does this happen?

Our research demonstrates that an insecure attachment seems to result in children—and later, adults—having difficulty controlling or modulating their emotions, knowing how to soothe themselves when distressed, or feeling relaxed and trusting with others and this, in turn, was reflected in what we saw in their relationships with their partners and children. Parents were often unable to see their own contributions to distress and conflict in their key relationships. In all likelihood these difficulties emerge from not having had a nurturing parent, not feeling lovable, and not learning how to accept or nurture themselves.

When the client becomes conscious of this dynamic, it is natural to feel angry with the parent. But how do we move from anger, self-blame, and an insecure model of close relationships to a more tolerant, compassionate view of our upbringing? That is, how can we achieve a more hopeful model of what we can expect or work towards in our close relationships? And, why should anyone bother?

How therapists help or hinder clients

It’s common for a therapist to support or encourage an adult’s anger at his or her parents for their behavior in the past, based on the idea that getting in touch with and expressing the anger will help the client move away from self-blame and toward better mental health.

However, the client’s relationship with a therapist may be more disempowering than empowering over time if the therapist continues to support the idea that the client has to aggressively fight back against the reality or the memory (if the parent is no longer alive) of a formidable father or mother, rather than to see the parent as someone with his or her own fragilities, insecurities, and longings. This is important to consider, because when adults hold on to negative feelings about early relationships, it can reinforce their self-view as a victim and leave them unable to take action to establish intimate relationships that are satisfying, trusting, or at least, not harmful.

Without some prodding, a client could also conclude that avoidance rather than repair of a relationship with a parent is the only choice. While ending a relationship with a parent may sometimes be the healthiest decision, it isn’t always: In stopping at supporting a client’s anger at a parent, some therapists may foreclose the possibility that the parent might still be able to provide some of what the adult child longs for and needs, even if it plays out more in the grandchild-grandparent relationship.

Although many writers who talk about attachment write as if the model is formed early and stamped in as a template forever, the data don’t support this. Models of attachment can change over time as more nurturing or satisfying relationship experiences nudge us toward a feeling of increased ease, trust, and confidence about developing satisfying intimate relationships (what some call “earned security”). This may happen when a romantic partner’s style shows how a more accepting stance can feel nurturing or when a more responsive relationship with a caring adult—therapist, mentor, teacher, or friend—reveals that it is possible to find more caring, supportive, and satisfying close relationships.

How to move from anger to understanding

In general, we can’t forgive our parents until we have some clarity that we didn’t deserve their mistreatment. It is equally important to realize that in the world of the family, traumas often beget traumas: Most parents who mistreat their children were likely also mistreated. In order to break this sad cycle, a goal might be to see one’s parents not only as neglectful or hostile, but as ill-equipped to create the kind of family environment that fosters confidence and secure attachments.

The notion that parents “did the best they could” may seem negating for those who already feel impoverished and undeserving. But moving toward that perspective, rather than holding on to long-term or newly-found anger, has three potentially productive outcomes:

It takes psychological effort to go from anger to understanding, and to nurture the insight that what feels intentional isn’t always so. This is true whether or not one is receiving help from a professional.

It also demands developing more immunity to a parent’s perceptions and behaviors—a process that signifies growth, and makes us more resilient both in our family relationships and in confronting life’s challenges. Developing compassion for parents, intimate partners, and friends is useful, not only because it makes us more compassionate people, but because it allows us to see others’ frailties, to recognize sometimes bungled attempts to care for us, and eventually to love more fully and be more open to being loved by others.

While many people find that this is one of the hardest tasks to accomplish—with or without professional help—some are lucky enough to discover that it is freeing in ways they hadn’t imagined, and that the world seems a more welcoming place in which to live and love.