But while Spears and Palin may have made headlines, they are hardly the only teens in America having sex. In fact, more than two-thirds of adolescents in the United States have sexual intercourse before turning 19, according to the Centers for Disease Control and Prevention. About half of all teens who report having had sex don’t regularly use condoms or other birth control. And a new report from the National Center for Health Statistics found that births to 15 to 19 year olds have increased for the first time in more than a decade. 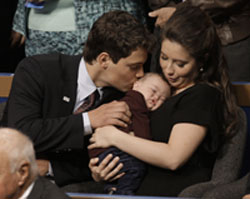 Levi Johnston, 18, kisses Trig, brother of his girlfriend Bristol Palin, 17, as he holds him during the Republican National Convention in September. Weeks earlier, Ms. Palin had announced she as pregnant, and that Mr. Johnston was the father. © AP Photo/Paul Sancya

As controversial as teenage pregnancies are, just as controversial is the question of how to prevent them. Popular discussion—and even some research—around this issue is highly politicized, often leaving parents and educators at a loss. However, some recent studies offer guidance to anyone wishing to help teens make healthier choices about sex.

In a study published in August in the Journal of Adolescent Health, Boston College researcher Rebekah Levine Coley and her colleagues examined data on nearly 5,000 adolescents between the ages of 12 and 16, tracked over a six-year period. Coley’s team wanted to determine whether certain kinds of parenting affect teens’ sexual activity. They zeroed in on three factors: how frequently parents engaged with their kids in family-centered activities, such as eating dinner or attending religious services together; how critical or controlling they were toward their kids; and how knowledgeable they were of their teens’ activities and friendships. The researchers also gathered reports from the teens on how frequently they’d had sex, the number of their sexual partners, and how often they’d used birth control.

Results showed that when parents were less openly critical and less controlling of their teens and more engaged in regular family activities during mid-adolescence, their teens were significantly less likely to engage in risky sexual behavior in later adolescence, regardless of how much parents knew about their kids’ activities.

Coley’s findings add to a body of research that has found that an “authoritative” parenting style—where parents give their children autonomy but communicate clear limits to them, while staying involved in their lives and providing a warm, caring attitude—is more effective at reducing risky teen behaviors than either a rigid, authoritarian style or a more laissez-faire style. And Coley’s study is the first to find evidence that authoritative parenting techniques may reduce teenage sex.

“If we presume there is something causal about what parents are doing, it is clear that more involved parenting is better,” says Coley. “But it makes sense that authoritarian, controlling parental behavior leads to higher risk in teens, because that type of parenting doesn’t help children grow their autonomy or their decision-making skills.”

The analysis, conducted by Douglas Kirby of Education, Training, and Research Associates, a nonprofit research organization, showed that abstinence-only programs had little to no significant impact on delaying when teens start to have sex, decreasing their number of sexual partners, or increasing their odds of using birth control. By contrast, about two-thirds of the comprehensive programs were effective on these fronts.

Kirby’s results come on the heels of a controversial 2007 study funded by the Bush administration, which also found abstinence-only programs to be ineffective. In light of all these results, Kirby recommends against using abstinence-only programs and encourages wider dissemination of comprehensive sex education programs. Yet despite this scientific research, many parents and educators remain ambivalent about such an approach.

“There are communities in this country that aren’t going to feel comfortable with programs that talk about birth control, no matter how effective those programs are,” says Sarah Brown, CEO of the National Campaign to Prevent Teen and Unplanned Pregnancy. Though she acknowledges the implications of Kirby’s study, she welcomes studies like Coley’s, which look at factors beyond formal education programs that influence teens’ choices about sex.

“There is now a large body of literature which suggests that having close family attachments delays sex and increases the probability that teens will use more protection,” says Brown. She says parents need to become more involved in their children’s lives and communicate with them regularly, especially as their children move from adolescence into adulthood. “Many parents wonder when they should have ‘the talk’ with their kids,” she says. “But really they need to think about sex education as part of an ongoing conversation about all aspects of human relationships. ‘How do you know when you’re in love? How do you know when you want to be sexual with someone?’ There are 5,000 conversations that parents need to have with their kids. It’s an 18-year conversation.”

Coley agrees, but worries that parents in the U.S. don’t get the support they need to find time for these kinds of talks, or for connecting with their teens in other ways. She says that if parents are to act on any of the lessons from her research, they’re going to need help from an entire society committed to raising healthier kids.

“Americans work more hours, work more weeks per year, and have less vacation or sick time than any other developed country in the world,” says Coley. “If we want parents to spend more time with their kids, we need social policies which support a better balance between work and family.”