While society at large turns its interest to gratitude in November, National Gratitude Month, some researchers spend their whole years—and careers—studying what gratitude means, its benefits, and how to practice it. 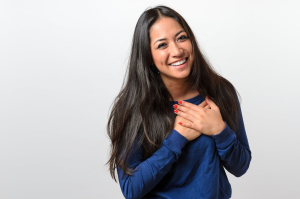 Here at Greater Good, we’ve reported on new research suggesting that gratitude at work can reduce your stress and help your team feel heard, and that gratitude journaling was a helpful tool for people during the COVID-19 pandemic.

But there were a few more gratitude studies published this year that we think you’ll be interested in—studies that can help you figure out the best way to express your gratitude, navigate culture differences around saying thank you, and find the motivation to start your own gratitude practice.

Here are six more insights that researchers have learned from studying gratitude in 2022.

1. A gratitude letter might be better than a gratitude journal…

Researchers from the University of California, Riverside, aimed to figure out the best way to practice gratitude if you want to be happier in life.

To find out, they recruited 958 Australian adults to try out different practices daily for a week: writing a gratitude letter to someone (but not sending it), writing a gratitude essay about something they were thankful for (not a person), writing lists of people or things they were grateful for, or simply keeping track of their daily activities.

Before, after, and one week later, the participants filled out surveys measuring their life satisfaction, and positive and negative emotions.

Among all those practices, writing a gratitude letter to someone appeared to be the most beneficial. When compared to the people who only kept track of daily activities, those who wrote gratitude letters felt more gratitude, positive emotions, elevation, and connectedness.

More broadly, the longer writing activities—letters and essays—seemed to be more beneficial than shorter lists (the typical gratitude journal practice).

There’s one caveat: Gratitude letters made people feel a greater sense of indebtedness compared to all the other gratitude practices. The benefits were also small and short-lived, the researchers found, suggesting that we should practice gratitude regularly if we want to keep getting something out of it.

This study might inspire you to write a gratitude letter…but could there be an even better practice?

2. …but there’s no “best” way to practice gratitude

The same researchers published a second study this fall that compared gratitude letters to two other practices—practices that involved expressing gratitude directly to others rather than simply reflecting on it in solitude.

They recruited over 900 undergraduate students, mostly Asian and Latino, to try out writing gratitude letters (again, not sending them), sending a thank-you text, or expressing gratitude publicly in a social media post or tweet.

The participants tried their practice four times, expressing gratitude for four different people. Before and after the experiment, they reported on their emotions, satisfaction with life, and feelings of connectedness and support.

Contrary to expectations, the gratitude activities all seemed to have similar benefits, when compared to a simple non-gratitude activity. No matter how they expressed gratitude, people tended to feel greater positive emotions, satisfaction with life, elevation, connectedness, and support, as well as less loneliness.

Texting a thank-you did have a slight edge, though. Compared to writing a private letter or broadcasting a public post, it made people feel even more connected and supported.

These two studies build on an earlier experiment that compared expressing gratitude via text, on video chat, or in person—and also found that the medium didn’t really matter (though people felt slightly more connected and happy saying thanks on video or in real life).

Overall, it seems like we shouldn’t fret about the “best” way to say thank you. What’s much more important is that we reflect on our gratitude in the first place—and, if possible, share that thanks to create a positive connection with others.

3. We start appreciating gratitude in others as young as age four

When do kids start to notice and understand other people’s expressions of gratitude?

Next, the researchers asked the children questions comparing the two gift-receivers.

These findings suggest that even young preschoolers interpret expressions of gratitude as important indicators of social information. “This understanding increasingly allows children to evaluate the reliability and trustworthiness of potential cooperative partnerships,” explain researchers Amrisha Vaish and Shannon Savell. In other words, gratitude helps even young children distinguish between people who are caring and worthy of getting to know better, and people who are selfish whom they might want to avoid.

4. A gratitude app can help you ruminate less

When we were locked down during the COVID-19 pandemic, our well-being took a hit, as we suffered from worry, stress, and isolation. But researchers from the Netherlands and Belgium found that using a gratitude app could help people cope better under stress.

In the experiment, hundreds of European adults first reported how stressed, anxious, and depressed they were, as well as their tendency to be grateful, ruminate, or reframe negative experiences in positive ways. Then, half the adults used a gratitude app for six weeks, while others waited to use it. The app featured writing assignments focused on things like appreciating the good things in life, expressing gratitude toward others, and finding the positive in adversity. People were encouraged to write 10-15 minutes per day for five days of the week.

Afterward, researchers re-measured the participants’ well-being and found that those who’d used the gratitude app were less depressed, anxious, and stressed at week six than those on the waitlist. Their greater well-being, which lasted until week 12, was tied to less rumination, more positive reframing, and more gratitude.

As the researchers conclude, “Practicing gratitude using a mobile application has potential to make a significant impact on the mental health of the general population, even during the difficult times of a pandemic.”

5. Gratitude can protect you from regret

According to one study, regret is the emotion we experience the most frequently—after love. So how do we deal with feelings of regret?

An October study found that practicing gratitude may help.

In one experiment, Chinese participants imagined a friend supporting them with their difficulties in life and how grateful they would feel toward this person, while others just thought about their recent life experiences. Then, everyone imagined making a decision that would typically induce regret: a poor investment, or choosing the wrong hotel for a trip.

Ultimately, the participants who had reflected on a gratitude experience felt less regret about their mistaken decisions.

In other experiments, the researchers uncovered the reason why gratitude seemed to protect people from regret: It keeps our minds from dwelling on the past. In general, they found, grateful people tend to focus less on the past. And if you guide a grateful person to mull over past mistakes, they are no longer protected from regret.

“Gratitude has been reported to make people think less about the negative past and cherish what they have here and now, which helps to reduce regret,” write the Beijing-based researchers. Gratitude orients us to the present, which is why it may help protect against future-oriented emotions like anxiety, too.

Of course, regret isn’t all bad—it can inspire us to grow and make better decisions in the future. But perhaps gratitude can help us avoid getting stuck in endless, pointless regret and allow us to move forward in life.

6. Should you say thanks or apologize?

Because much research on gratitude has focused on Western cultures, it may represent a biased view of what gratitude looks like and how it’s practiced. For example, past studies have found that South Koreans are more likely than Americans to apologize when asking for a favor—and more likely to grant favors when they include apologies, like “I’m sorry to bother you”—whereas Americans prefer to use a thank-you in this context. Situations that call for gratitude in one culture may not call for gratitude in another.

Complicating these findings, though, a 2022 study found that thank-yous may be more effective than apologies in certain circumstances in Japan, even though Japanese people also frequently use apologies when asking for favors.

Japanese college students read an email (hypothetically, from a friend) asking them to provide feedback on an essay. After the students gave their feedback, their “friend” offered one of four responses before requesting feedback on a second essay: a thank you, an apology for bothering them, both, or neither.

The students were most likely to offer additional help—and say they would trust the friend with a secret—when the friend gave thanks only.

Does that mean that a simple “thank you” is the best way to connect with the people in your life who are helping you, no matter their cultural background? Much more research across different cultures needs to be done to answer this question. For now, the message might be that expressing gratitude makes a difference in our relationships, but we should be thoughtful about when and how we do it.