Even though we may believe that it’s important to say thank you, sometimes expressing gratitude is easier said than done. We might find ourselves getting hung up on the details of what to say or the best way to deliver the message. Or we may feel embarrassed about not having expressed gratitude previously. We might even end up feeling guilty or indebted if the person we’re thanking has repeatedly shown us kindness we haven’t yet been able to repay. 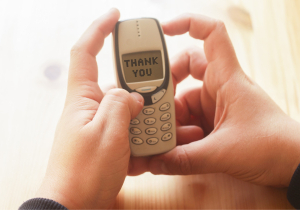 As a result, many times our gratitude goes unsaid.

According to new research, however, it’s possible we might be making our thanks more complicated than it needs to be. In a paper published earlier this year in The Journal of Positive Psychology, researchers compared the effects of expressing thanks in person, over a video call, and over text. And, while people generally expect an in-person thank-you to be most impactful, what happened in reality was quite different: Sending a thank-you over text was almost as impactful as delivering the message in person. Additionally, texting may be especially well-suited for situations where we feel awkward or embarrassed about expressing our appreciation.

In one study, 219 college students from the United States and Taiwan participated in a gratitude activity in which they wrote about three things they were grateful for over a two-week period. After writing, the students were asked to actually thank the person involved. Some connected with the gratitude recipient in person, others via video call, and others via text (a fourth group of people wrote about celebrities and didn’t express thanks). At the beginning and end of the two weeks, participants completed surveys measuring their feelings of well-being, connections with others, depression, loneliness, and happiness.

The researchers found that people who expressed gratitude increased their well-being, with only a few differences for the different methods of gratitude expression. Overall, video calls were just as beneficial as meeting in person. Texting was slightly less effective than video calling—it didn’t make people feel more connected and happy, while video calling did. However, participants who sent their thanks over text still experienced benefits: Texting boosted their well-being and reduced their loneliness compared to the people who wrote about celebrities.

Interestingly, this goes against what people generally expect about gratitude: that thanking someone in person is better. When the researchers asked a separate group of people to guess how they would feel expressing gratitude in different scenarios, people thought that thanking someone in person would be the most meaningful experience, for both the person giving thanks and the person being thanked.

In fact, thanking in person may have a slight downside in some cases. In another study, the researchers asked 165 college students from Taiwan and the United States to recall how they had felt when they had previously thanked someone else. Some people were asked to recall a time when they’d expressed appreciation in person, while others reported on a time they’d thanked someone over text. The researchers found that how people expressed gratitude didn’t impact how happy they felt, or how meaningful the experience was to them—nor did it impact how happy they thought the recipient felt. However, people reported that thanking someone in person (as opposed to via text) was slightly more embarrassing.

We know from past research that actually expressing our thanks to others—as opposed to just taking note of what we’re grateful for—has extra benefits. In one study, for example, people in a three-week gratitude program reported lower levels of depression and a greater decrease in negative emotions if they had been asked to express their gratitude to others. So even if we can’t meet in person, thanking a friend in a quick phone call or text can be a way to reduce feelings of isolation. All of this is good news for those of us who have been communicating over Zoom the past year.

That said, this doesn’t mean we should rely on texting alone to connect. Some past research has found that phone and video calls can have benefits that texting doesn’t, perhaps because a broader range of emotions can be communicated through voice. Additionally, Sen-chi Yu, professor at the National Taichung University of Education and coauthor of the new paper, points out that face-to-face communication might be more beneficial for those who are more extraverted.

Overall, however, the message is that we shouldn’t fret about finding just the “right” way to express our gratitude. In fact, you’re probably better off sending a quick thank-you today than waiting for an occasion to schedule an in-person visit. You can take heart in the fact that many of gratitude’s benefits can be attained regardless of how you send the message.