Much of the world lives in urban settings, with North America housing 82% of its population in cities. But while cities can be attractive places to live, providing work and recreational opportunities for people, they can also be lonely and unhealthy. 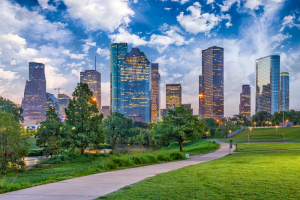 In fact, a recent survey of mayors in 126 American cities found that the key priority in all of those cities was mental health. How can we better design cities to enhance mental health, then?

That’s the subject of Jenny Roe’s and Layla McCay’s new book, Restorative Cities: Urban Design for Mental Health and Wellbeing. Roe and McCay have consolidated findings from decades of research to uncover how elements in a physical environment affect the people living there. They’ve created a blueprint for creating a “restorative city,” in which urban residents can be happier, healthier, and more socially connected.

Greater Good spoke with the authors recently about their book and what it has to teach urban designers and others who want to create healthier cities. Their insights also remind us city dwellers which aspects of our own city we can seek out and appreciate to improve our mental health.

Jill Suttie: In your book, you write about the key elements of a restorative city environment. What are those elements? 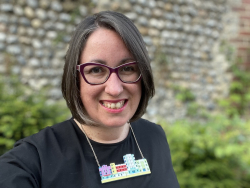 The “green city” is about exposing people to natural environments or green space. Research tells us that doing so can reduce depression and stress, improve brain function, and help people manage symptoms of anxiety disorders, schizophrenia, ADHD, and dementia. In our book, we explore the attributes of the green city that have impacts on mental health, like the amount or accessibility one has to nature, the type of nature involved, biodiversity, things like that.

The “blue city” is about urban water, which research says can reduce depression and stress. We highlight the importance of water maintenance in a city because, if water is stagnant or dirty or polluted, it won’t have those benefits.

The “sensory city” is based on evidence about how our senses can be harnessed to exert positive influence on mental health. Quite often, people in cities focus on sensory complaints—a horrible noise or smell—whereas there’s actually this opportunity to focus on sensory benefits—things like positive soundscapes and sonic refuges or increasing visual complexity, which reduce symptoms associated with depression.

The “neighborly city” is about using urban design to build strong social networks, which is, of course, very protective against mental health problems and helps people to recover more quickly if they have symptoms. Some examples are designing housing that promotes social interactions across all ages, incomes, and ethnicities; designing for impromptu encounters between neighbors at the market or the dog park; and making sure the neighborhood is walkable.

The “active city” is about integrating physical activity into everyday urban life. Of course, that’s good for your physical health, but it’s also really good for your mental health. Physical activity can reduce depression and anxiety, improve stress regulation, and improve brain function. The characteristics of an active city can include multimodal streets that people are able to walk or cycle, good connectivity between streets, and subsidized, integrated public transports.

The “playable city” is another key. We know children benefit from play; it fosters physical, social, cognitive, and emotional development. But there are benefits for adults from play, too. Delivering a playable city can help everyone benefit from creativity, learning, self-identity, and social interactions in a playful capacity. A playable city can include playgrounds, but also places not specifically designed for play, where playful activities can take place—like interactive art exhibits or parkour.

The “inclusive city” is designed for all ages, genders, races, ethnicities, sexual orientations, socioeconomic status, and the full diversity of physical, sensory, and cognitive abilities. Clearly in the past and, indeed, to this day, urban design has contributed to segregation and to exclusion and prejudice, and that has real impact on people’s mental well-being. There are opportunities for cities to be more inclusive and attractive while recognizing the needs and characteristics of all residents. So that is the restorative city framework.

JS: When you did your research, did anything really surprise you about how restorative cities affect people’s well-being? 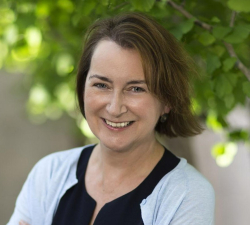 Jenny Roe: I don’t think any of it surprised me. But one thing that does surprise people is that there’s a strong relationship between access to green space and altruism, trust, a sense of belonging, and attachment. The fact that green space might serve to improve collective thinking and have social impact is a really novel and interesting finding. It might surprise some people to know that neighborhoods that have parks in them have stronger senses of trust and altruistic behaviors.

JS: I’m curious about the “sensory city.” How is a rich sensory landscape supportive of mental health rather than distracting or stressful?

LM: In urban design, there’s too much focus on vision and, to some extent, sound. But if we think about how humans have evolved, we know people actually make use of all of their senses—plus a sixth sense, which is an appreciation of the ambience of a place.

With sensory design, there are all sorts of interesting opportunities, like creating sonic refuges where you hear comforting sounds, or places where you’re smelling comforting smells—like children laughing or the smell of baked bread. Research tells us that certain of those sensory experiences are quite universal in their effects on people.
We can also think about lighting design that helps to keep people safe at night, open storefronts that are welcoming (instead of monotonous, featureless walls of superstores and office space that extend for a whole block), convenient access to fresh fruit, those sorts of things. And there’s an opportunity to not just mask unpleasant noises and smells, but to design sensory features that people would experience as positive.

JS: Why did you separate “blue” and “green” elements, rather than putting them together under “nature” elements? Are there unique benefits to blue spaces?

JR: Quite often blue spaces come with green spaces [like a creek in a park]. But blue spaces occur on their own, too—with city fountains or other engineered water features. There’s a limited amount of research on blue spaces, but what there is points to water providing additional benefits over and above what green space can deliver. It’s because water is dynamic—it’s flowing, interacting with light and wind and surface materials. And it has an extra fascinating quality to it—and fascination is a key attribute of a restorative environment.

JS: Creating a green environment within the city seems like it would do a lot of what you outline in your book—meaning, it’s restorative, it increases socialization, it can create a soundscape retreat or a place for exercise. Would you agree that green space may be the most important of all the restorative elements?

JR: I don’t disagree with that, because we’ve also got to think about sustainability, about climate change. What green space does is to act as a sponge and mop up water. We need to specifically design the kind of water features and environments that capture water, and we should create sustainable urban drainage systems. I don’t think having nature in the city is a luxury. It’s an absolute essential requirement for public health, but also for planetary health and for the resilience of our cities.

JS: What are some examples of cities around the world that you feel get it right when it comes to creating a more multi-layered restorative environment? 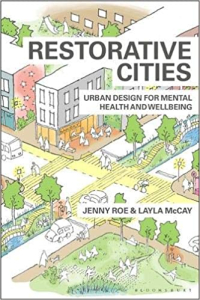 LM: We never like to point to a specific city and say, “This city is really great” in terms of its restorative environments. Most cities have some places where they get things right and places where they don’t. Some cities have some really fantastic restorative city designs, but they might only be accessible to richer people or certain types of people. Jenny was saying that, in some ways, green/blue cities may be one of the top priorities. But another really important priority is that a city is inclusive—that everybody has access to those restorative features. That said, there are cities that are doing some interesting things.

At the moment, I’m interested in Paris, which has taken a pedestrian-focused, cycling-focused approach to redesign. They’ve really changed the way that people move around the city. Paris has increased walkability and bikeability in response to COVID in ways that are likely to be sustained beyond the pandemic. It’s interesting to look at a city like that because, pre-pandemic, people probably couldn’t imagine that such significant changes could be made. But now that they have been made, people are recognizing their merits.

Another classic city is Barcelona, which has an interesting multimodal design in the form of what they call “super blocks”—streets designed to reduce traffic and encourage walking and cycling, green spaces that encourage stopping and engaging with your environment. That’s a model that other cities are looking at.

JS: Has the pandemic affected your vision of a restorative city?

JR: It hasn’t, because I’ve been an advocate of open space for the purpose of health and well-being for many years. But I think it has changed how the public thinks about open space, particularly the public’s need and demand for closer access to public parks, particularly for those who don’t have gardens or private green space. I think policy advisors, urban planners, and people in public health are waking up to the idea that good-quality restorative open space benefits mental health.

JS: Homelessness is a huge issue where I live, and there’s a desperate need for additional housing. Is that need in competition with your vision here?

JR: My view is that one of the root causes of homelessness is poor mental health. But housing is obviously a priority and need. There’s a really interesting Finnish scheme that’s having a lot of success in terms of providing long-term housing for homeless people. So, there are examples out there of things working well.

But supporting mental health could help prevent some of the homelessness that we see on our streets in the first place. Designing restorative cities and providing adequate housing are not mutually exclusive. In fact, providing housing is part of the restorative city framework.

JS: What are your hopes for your book?

JR: My hope for the book is that it’s really useful for people who are involved in planning and designing cities, that it gives them the evidence they need to make the case for designing restorative cities, and that it helps them know how to implement the principles to get the very best value for their efforts and make cities as good for people’s mental health and well-being as possible.

LM: My hope would be that we build better equity in access to a restorative environment. That’s super important. And I hope that we see real change on the ground, that we see our leaders embracing this idea, because they’ll be the catalyst for change.