The ingredients of happy communities have been long debated by urban planners, politicians, and activists. New research, however, suggests there could be a simple way to give a universal boost to urban residents’ mental well-being: more green space.

Research recently published in the journal Environmental Science and Technology suggests that just moving to a greener urban area improves our mental health for at least three years following the move. 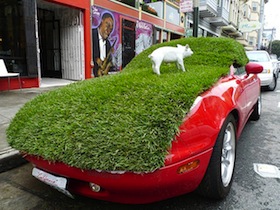 A research team at the University of Exeter’s European Centre for Environment and Human Health used data from the British Household Panel Survey to follow more than 1,000 people who had moved within urban areas over a six-year period.

The research team then used England’s Generalized Land Use Database to determine whether the individuals had moved to areas with more or less green space. Once divided into two groups, the team studied the respondents’ self-reported mental well-being two years before the move and three years after.

They’d done something similar before. In a 2013 study using the same data sources, the team concluded that greener urban areas have far less of an impact on our happiness than getting married, or better yet, becoming employed. But unlike either of those happiness boosters, this recent study suggests that more urban green space gives us an increase in happiness that lasts.

The researchers’ unique data sources allowed them to control for the impact of marriage, employment, and other changes. The British Household Panel Survey is an extensive longitudinal social survey, which gathered information about wide-ranging aspects of people’s lives, from household income to time spent commuting. Such a vast amount of information for each survey respondent allowed the researchers to use statistical models to control for other changes that could have affected the respondent’s happiness.

So why are we happier living in greener urban areas?

Researcher Ian Alcock said there are several prevalent theories. First, the sight of green space might help to de-stress us, he said, allowing our “overburdened cognitive faculties to restore themselves to a more relaxed state.” Alternatively, there could be a link between the amount of green space in an area and the amount of exercise we get or the amount of social interaction we have with other people.

If moving to greener areas makes us happier, it stands to reason that the opposite could also be true. The reality isn’t so straightforward. As Alcock and his team expected, people who moved to less green urban areas experienced a drop in their mental health, but that drop came about a year before the move. Within three years, the movers’ mental health had actually returned to pre-move levels.

“The best we can do is speculate that people didn’t find it as bad as they had expected,” Alcock said.

Though Alcock stresses his team’s work is provisional, further research could have real implications for designing happier cities.

The research, he says, “is really interesting from a planning point of view because it suggests that there might be longterm benefits to communities from developing green spaces.”