Most crime in the United States has been dropping for decades, according to several reports. There’s a lively debate as to why—but a new study suggests one more factor to consider: Air pollution has been dropping, too. 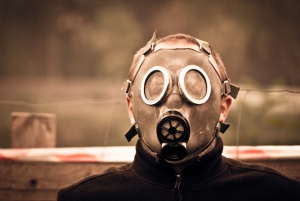 Jackson Lu of Columbia Business School and colleagues looked at data on toxic chemicals or compounds in the air of 9,350 American cities over a nine-year period—and then compared that data with crime statistics in those cities for each year. Before running their analyses, though, they first accounted for many other variables that might affect crime levels—such as a city’s population, number of police, income, average education levels, racial composition, poverty rates, unemployment rates, the city’s degree of urbanization, and its primary industries. In other words, a pretty exhaustive list.

Results still showed that when cities had lower pollution levels, they also reported fewer murders, rapes, robberies, assaults, burglaries, and motor vehicle thefts. In more polluted years, those numbers were up. Interestingly, during this same nine-year period, populations increased. This suggests to Lu that, even though crime tends to cluster in big cities, higher numbers of people might not be the only relevant factor in crime.

Discovering this correlation was only the first step in their study. Through a series of experiments, Lu and colleagues found that air pollution might actually be causing ethical lapses—a finding that could inform environmental and law enforcement policy debates.

“Air pollution not only corrupts people’s health and the environment, but also pollutes people’s morality,” says Lu. “This is a key takeaway with important practical implications.”

In order to explain this big-picture correlation, Lu and colleagues asked study participants to look at either polluted or unpolluted cityscapes and imagine what it would be like to live there. (They couldn’t expose people to actual pollution, for ethical reasons.)

Then, they completed a supposedly unrelated task—the Remote Association Test, which is used to measure creative problem-solving. However, in this case, there was a twist: the experimenters had rigged the RAT so that, even though they were told not to, participants could cheat to improve their scores.

The results showed that those participants who were exposed to pollution pictures cheated significantly more than those who didn’t, supporting the hypothesis that pollution affects ethical behavior.

“Air pollution not only corrupts people’s health and the environment, but also pollutes people’s morality.”

Why would that be? Lu thought anxiety might play a role, since prior research had shown that pollution can increase anxiety, and anxiety has been linked to unethical behavior. So, his team conducted another experiment.

This time, people were recruited both from the USA and India and exposed to pictures of Beijing, China, either on very high or very low pollution days. Then, they were asked to imagine a typical day in the city and to write about it in a diary-like format. Afterwards, they were given a task that ostensibly measured luck, but in fact measured cheating.

Coders blind to the study’s intent rated the essays on how much they showed that the person seemed distressed, irritable, nervous, or scared or enthusiastic, excited, happy, or relaxed. The scores for positive emotions did not affect the results. But those who imagined themselves in polluted cities cheated more on this task than those imagining themselves in clean places, and the increases seemed to be accounted for by differences in anxiety levels expressed in their essays.

To Lu, this makes sense because of anxiety’s impact on moral behavior.

“To resist the temptation of cheating or violating moral principles, individuals often need to use self-regulatory resources,” he says. “But, when you’re anxious, you’re already expending a lot of psychological resources to cope with the anxiety; therefore, you have less resources to resist unethical behavior.”

Lu’s findings seem pretty far from what you might usually consider pollution’s main effects. However, they do mirror another study’s findings, not yet published, which found that elevated levels of pollution on certain days in Los Angeles and Chicago correlated with more violent crime rates on those days.

Of course, this doesn’t mean that solving pollution problems will also stop crime—there are multiple factors to consider here. But it does give us more food for thought around the benefits of clean air and why governments should protect it. Lu points to the fact that some governments seem to be cutting budgets for environmental protection organizations right now, which he thinks—and his results suggest—is a big mistake.

“In addition to the toll on the environment, there may also be some effects on people’s ethicality,” he says. “Pollution could be an immoral nudge that impacts numerous people around the world.”