Launched into public awareness by the psychologist Kristin Neff, the practice of self-compassion has emerged as a proven way to boost well-being and resilience amid life’s challenges. “With self-compassion,” Neff writes, “we give ourselves the same kindness and care we’d give to a good friend.” 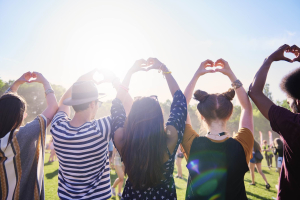 A new Rutgers University study suggests that self-compassion has another, counterintuitive benefit: It helps you to become more accepting of other people who are not like you. Being kind to yourself, the study reports, can broaden your tolerance of others—so long as your self-compassion is rooted in “common humanity,” a belief that life’s joys and struggles are part of the shared human condition.

“People who are viewing themselves and their failures and their suffering as normal parts of human experience are more likely to have compassion for others,” says H. Annie Vu, a psychology graduate student at Rutgers and lead author of the study. “That is linked with less prejudice.” She aims to develop training programs that foster people’s sense of common humanity, which she hopes will deepen their compassion for themselves and others—and, as a result, promote social acceptance.

Self-compassion, the quality Vu explored in her study, is distinct from self-esteem. Self-esteem involves how you answer the question “How much do I like myself?,” and it often crumbles when others criticize you. But self-compassion is a form of self-regard that persists no matter what others are saying. It means accepting yourself even when you fumble or fail.

As Neff defines it, self-compassion has three major components: mindfulness, awareness of your own feelings and thoughts; self-kindness, a commitment to caring for yourself in tough times; and common humanity, a sense that everyone experiences highs and lows in life just like you.

Vu’s study looked at how different components of self-compassion related to people’s attitudes toward others. The study’s 163 student participants took Neff’s 26-item survey to assess their self-compassion, including statements like, “When I’m down, I remind myself that there are lots of other people in the world feeling like I am.” The students also took a self-esteem survey and a test that evaluated their feelings about “outgroups” often marginalized by society, such as unhoused people or members of minority groups.

The analysis by Vu’s team found that people’s self-esteem did not meaningfully predict how they felt about outgroup members. Self-compassion, on the other hand, did—but it was people with greater feelings of common humanity, not self-kindness or mindfulness, who were more accepting of others not like them.

While self-kindness and mindfulness involve more of a focus on yourself and your emotions, common humanity “involves perception of others, and that connectedness between self and others,” Vu says. “That explains why it’s the only self-compassion component that is associated with low prejudice.”

Common humanity, in other words, helps you assess your own experiences against the failures and triumphs shared by everyone else on the planet. When you do that kind of comparison, it may be harder to look down on those different from you, because you’re focused on what unites you rather than what sets you apart. A sense of common humanity may also make your self-compassion more durable, because when you understand how your struggles reflect the shared human experience, it’s less tempting to blame yourself for them.

A 2018 study by Italian researchers had also found that self-compassionate people were more accepting of others, but Vu’s study goes further, showing that this connection holds up independent of people’s self-esteem. (Previous research has shown that people with high “me first” self-esteem are sometimes less accepting of people different from them.)

Vu’s finding also builds on reports from political scientist Kristen Renwick Monroe, who found that what set Holocaust rescuers apart from peers was their strong sense of common humanity. Even if (as was often the case) rescuers came from a different background or culture than the people they were helping, they recognized just how similar they were to those being persecuted, which motivated them to act.

Underscoring what connects us

Vu’s study is among the first to combine what have long been two distinct branches of research: studies on how people feel about themselves, and studies on how they perceive members of other groups. Through further study of how inner states affect outer attitudes, Vu and her Rutgers colleagues hope to create training programs that build up people’s sense of common humanity—and thereby broaden their acceptance of others.

Developing and testing these educational programs could take years, Vu says. Yet people can start now to shift their focus toward what links them to all humanity—and observe the real-world benefits for themselves.

“The more you realize you are connected to other humans—and that other humans are humans—the more you’re able to regard them with dignity and respect,” says social worker and empathy educator Kristen Donnelly, founder of the Abbey Research firm. “The work of understanding your humanity is deeply connected to the work of understanding our connectedness. Difference is not a threat, but an opportunity.”