Once a heavy drinker and smoker, my 84-year-old father was never a good candidate for living a long life. But he’s remained mentally sharp through four bouts of cancer and a litany of other health complaints, while my younger and (seemingly) healthier mother suffered from dementia and died four years ago. What gives?

If researchers are right, my father has (inadvertently) followed some of the best practices for battling mental decline. New studies are pointing to ways one can slow, and in some cases reverse, the memory loss, distractibility, and other cognitive deficits that often come with advancing age. Here are three of the key findings for how to keep your brain fit. 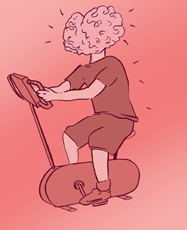 You know how your doctor is always telling you to get a moderate amount of exercise to stay healthy? Well now there’s evidence that exercise not only helps your heart and lungs, but it also might improve your brain.

In a 2008 review of more than 50 scientific studies, researchers Arthur Kramer and Kirk Erickson found that regular aerobic exercise improved brain functioning for healthy people and those with mild cognitive impairments. In particular, those brain functions associated with “executive control”—such as multi-tasking, planning, and problem solving—were most affected by exercise. Even moderate walking two-to-three times a week over a six month period was enough to produce positive results. In one study, brain imaging results revealed that patients in the early stages of Alzheimer’s disease who were more aerobically fit had less brain atrophy than those who were less fit.

“Aerobic walking, riding a bike or using a stationary bike, or swimming—anything that sustains your heart rate at 65 percent of its maximum capacity or greater for up 30 minutes—appears to be neuroprotective”—meaning it protects your brain—“and will decrease your chances of getting other diseases too,” says Kramer.

But how does it work? According to Kramer, exercise enhances neuroplasticity—the brain’s ability to grow new neural and blood flow pathways in response to stimulation and learning. The greater the brain’s reserve of neural pathways, the better it can respond to strokes, Alzheimer’s disease, or head traumas from falls, which all become more likely as you age.

Researchers need more information before they will more fully understand the relationship between exercise and brain function, says Kramer. For example, it isn’t clear yet if there is a ‘dose response,’ where more exercise equates to better cognitive health, or whether slacking off on an exercise program changes the equation. Still, Kramer is convinced that exercise is central to maintaining brain health. 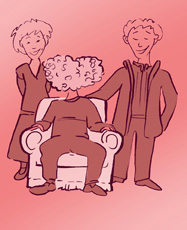 Researchers have long known that having social connections helps protect against the negative impacts of aging. But not until recently have they been able to show a direct link between social activity levels and the brain.

In a 2007 study, Valerie Crooks, a researcher with Kaiser Permanente, assessed 2,200 women over a four-year period, looking for signs of mental decline while evaluating their degree of social connection. Her study found that women who had a larger social network and daily social contact had a substantially lower risk of developing dementia, even when she factored in age and hormone use.

In a similar study, Robert Wilson of Rush University’s Alzheimer’s Disease Center in Chicago found that people who felt lonely were more likely to develop dementia. Wilson and his group followed a group of 80-year-old patients with no signs of dementia and assessed their loneliness, memory loss, and confusion levels every year for four years. For every one point increase on their loneliness measurement scale, the risk of developing dementia increased 51 percent over that period. Even when patients had many social contacts, feeling lonely led to mental decline, suggesting that the quality of social interactions may be more important than the quantity.

“Our results are consistent with other studies which show that negative emotions are related to the development of dementia and cognitive decline in old age,” says Wilson.

Interestingly, when Wilson’s group looked at the brain autopsies of subjects who died during their study, they found that some people who hadn’t reported feeling lonely still showed plaques or tangles in their brains—the physiological hallmarks of Alzheimer’s—without actually developing the symptoms of dementia, such as memory loss and confusion. In other words, having positive social connections may have protected them from Alzheimer’s dementia, even though their brain’s physiology seemed to leave them vulnerable to it. Although researchers are still trying to figure out this phenomenon, Wilson thinks that having good social connections over time may somehow build up overall brain functioning, so that one part of the brain can take over if another part becomes damaged.

Joining a group, taking a class, or scheduling regular visits and phone calls with friends and family can all help build these social connections. The same goes for doing volunteer work, which may carry added benefits: According to preliminary results from a recent study by Sei Lee at the University of California, San Francisco, presented this past May at the annual meeting of the American Geriatrics Society, people who volunteered lived longer, even after considering other factors, like socioeconomic status, chronic health conditions, and cognititive function. 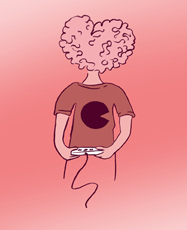 3. Stimulate your brain—even with video games

There is now ample scientific evidence that keeping your mind active is good for brain health. But what’s the best way to do that?

Capitalizing on this research, several companies have sprung up to market the idea of “brain fitness” to aging Baby Boomers. Though many, such as Lumosity, have based their programs on neuroscience research, not all have done the rigorous testing needed to show their programs work.

Posit Science, founded by neuroscientist Mike Merzenich, is an exception. Posit has developed two computer-based training programs for seniors designed to increase the speed and accuracy of how they process auditory and visual information. The auditory program (IMPACT) has been tested in large, clinical trials around the country and has been shown to improve not only auditory processing speed and accuracy, but related skills like memory and attention. Similar results have been found for the visual program, though using smaller study populations.

“The benefits of our training programs are substantial,” says Merzenich. “If you are 70 and your brain is operating like a typical 70 year old, you can train with our program, and your scores on cognitive tests will improve to levels you’d find in a 59-year-old brain.”

That may be true, but some researchers are still skeptical.

“We just don’t know enough about how these programs work,” says Arthur Kramer. Although he recently co-authored his own study using a video game to improve cognitive function in the elderly, he remains cautious, noting that “there are still relatively few studies of computer-based products.”

Denise Park, a researcher at the University of Texas, agrees. But she has an additional concern about computer-based training programs: that seniors won’t maintain interest in them long enough to reap the benefits.

“It may be very possible that engaging in fun, novel activities may be as stimulating, or more stimulating, than computer training,” says Park.

Evidence from another recent study may support Park’s hypothesis. Robert Wilson monitored more than 700 elderly participants for five years and found that those who reportedly engaged in everyday mentally-stimulating activities—like reading the paper, visiting a library, or playing checkers or chess—were less likely to have cognitive impairment, and were less than half as likely to develop the dementia symptoms of Alzheimer’s disease. Even when researchers considered the participants’ past levels of education and socio-economic status, being mentally engaged later in life still seemed critical to reducing the risk of dementia.

So, will all this research actually compel people to do what it takes to keep their brains fit?

“Let’s face it, some people hate to exercise, even when they know it helps,” says Kramer. He argues that, as we age, we tend to slow down and get sore joints, which makes it even harder to build up the will to exercise. But Kramer believes that communicating how exercise benefits the brain may help motivate people to change their lifestyles.

Mezernich of Posit Science suggests another possible incentive: economic interest. He envisions a time when health insurance companies will pay people, either directly or through reduced insurance rates, to participate in programs like his, assuming they will reduce the need for costly health care down the road.

Personally, I don’t need further convincing, especially after having one parent die of dementia. Chances are I may be living even longer than my dad, perhaps into my 90s. And since I want to keep my mind active even as my body ages, I’m already trying to stay physically active, keep my friends close, and give my brain a regular work out.

But I think I’ll leave the Crypto-quips to my dad.

Great post and very informative.  Yea I knew some of the stuff, especially the part about keeping your brain stimulated and exercise.  I actually have read a bunch about neuroplasticity of the brain and how the brain can keep expanding no matter how old your are.

The part I have never read about before was the social impact.  After reading your article it seems to make a good amount of sense how being social can help keep your brain healthy.

Thanks. You know, my dad just died this year, and
he was sharp all the way to the end! Although he’s
only an example of one, he still really amazed me.

There are other pieces in Greater Good about the
healthy aging brain, if you are particularly
interested in this topic - see “100 is the next 65” or
the review of the book, “Spark.”

For a good book on the importance or relationships
as you age, you might try “The Healthy Aging Brain:
Sustaining Attachment, Attaining Wisdom” by Louis
Cozolino (Norton, 2008).