From Archie Bunker to Grandpa Simpson, the popular assumption about senior citizens is that they’re set in their ways and politically conservative, unlikely to change their beliefs about social issues.

Not so, according to a recent study that suggests older Americans’ attitudes about many social issues are more susceptible to change—and often change in a more liberal direction—than is commonly assumed. 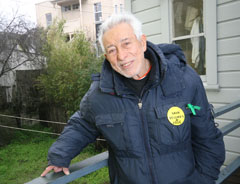 Sociologist Nicholas Danigelis and his colleagues looked at how attitudes of Americans in younger (18-40 years old) and older (60 years and up) age groups changed between 1972 and 2004. They focused on 16 different social issues, including women’s and gay rights, racism, divorce, and premarital sex.

The results, published in the American Sociological Review, showed that not only did older Americans’ attitudes change as they aged, but their attitudes shifted in a more liberal direction on 11 of the 16 issues, especially those concerning race and civil liberties. In many cases, the older generation’s attitudes changed more dramatically than did the younger generation’s, though American seniors are still less liberal overall than Americans under 40.

Americans’ support for a traditionally conservative view on race—that racial inequality exists because African Americans are not as motivated or capable as whites—compared to just a 15 percent decline among younger Americans. Only about one-third of this change in the 60-plus age group was due to more liberal Americans aging into the senior population, and older (often more conservative) Americans passing away. The rest of the change—almost two-thirds—was due to seniors changing their minds on this topic as they aged.

Danigelis says he hopes these findings challenge people to get past their stereotypes and learn more about the elders in their lives. “You need to take the time to find out who they are, talk to them, listen to them,” he says. “Because in that way, you’ll get a sense of where they’re coming from, and perhaps where they’re headed.”