With the number of American suffering from Alzheimer’s disease expected to quadruple by 2050, researchers have been searching for ways to combat the disease. A recent study sponsored by the health maintenance organization Kaiser Permanente may offer one important clue, highlighting the benefits of frequent visits from friends and family members.

The study, published in the July issue of the American Journal of Public Health, examined the relationship between social contact and symptoms of dementia among roughly 2,250 women over the age of 78. All were members of Kaiser, which allowed the researchers to access the women’s medical records.

The researchers phoned the participants periodically over four years and asked them questions about their social life. How many friends and family members did they see regularly? How frequently did they see them? Could they call on them for help? Could they confide in them?

Researchers also assessed the participants’ mental condition over the phone, asking them to count backwards from 20, to offer antonyms for certain words, and to name the president and vice president. If they had difficulty, the researchers reviewed their medical records to see if they’d been diagnosed with dementia. 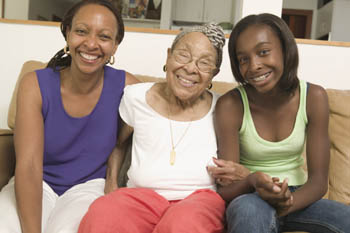 They found that participants who socialized the least were far more likely to develop dementia. Women in the bottom 20 percent in terms of social activity were almost twice as likely to suffer dementia over those four years.

The researchers cited two factors as key: the number of friends and family the women saw in a month, and how often they saw them. Daily visits appear to help the most, cutting the likelihood of dementia by half.

But could having dementia simply make women less likely to be social, instead of the other way around?

“That’s the magic question you want to ask with any study like this,” says Valerie Crooks, a researcher at Kaiser Permanente of Southern California and the study’s lead author.

Crooks says her study addressed this “chicken-or-egg” phenomenon by determining that the women in question were cognitively fit when the study began. Still, “it’s not inevitable that having a large social network will prevent you from developing dementia,” adds Crooks. “But it does seem to provide some added protection.”