Elsa Brehm Hoffmann loves bridge and is always ready for a party. Rosa McGee enjoys singing hymns to herself all day long. Will Clark makes a mean spaghetti and meatballs. What connects these three? They belong to the single fastest growing segment of the United States population: people over a hundred years old. 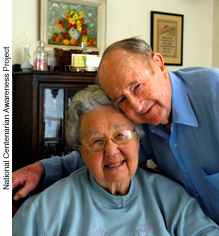 Will Clark, 105, recently bought a van for a 5,000-mile road trip across the Midwest with his wife, Lois, who is 102. © National Centenarian Awareness Project

Hoffmann, McGee, Clark, and the nearly 100,000 other centenarians in the U.S. provide inspiration to the rest of us. But they also provide researchers with a tantalizing puzzle: Why do some people live so long? For years, medical researchers have been studying this select group, identifying some key factors to a long life. Now, a growing body of research is suggesting that longevity isn’t just linked to good genes and a healthy lifestyle; it’s also tied to cultivating a positive, resilient attitude toward life. These results validate a simple idea: that centenarians can teach us how to live not just longer lives, but better ones.

At the fore of this research is the New England Centenarian Study (NECS), which has enrolled more than 1,500 centenarians from around the world over the past 15 years. The study’s director, Thomas Perls, says these participants dispel the belief that the older someone gets, the sicker he or she becomes. Instead, he says, “the older you get, the healthier you’ve been.” In other words, people who demonstrate exceptional longevity tend to have had a lifelong history of good health.

Indeed, people who die in their 70s or 80s are plagued by degenerative illnesses in the years before their death; in contrast, Perls has found that nearly two thirds of centenarians either delay the onset of diseases such as heart disease, stroke, and diabetes—or escape them altogether. Plus, a substantial proportion of centenarians who survive such age-related illnesses do so without developing physical disabilities, enabling them to remain socially, mentally, and physically active. As a result, in a culture that romanticizes youth, Perls argues that centenarians embody “a thoroughly optimistic view of aging”—one that shows that prolonging life and enjoying it go hand-in-hand.

How do they do it? 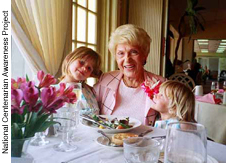 To reach 100, research suggests that it definitely helps to have the right genes. Longevity clusters in families; Perls has documented as many as eight siblings in one generation who lived to 100. He’s also found that the children of centenarians have only one-third the risk of dying from cancer as the rest of us, and one-sixth the risk of dying from heart disease. Although specific genetic mechanisms behind long life are notoriously difficult to prove, there is some evidence that centenarians may be less likely to possess specific genetic variations that predispose people to problems like cardiovascular disease, diabetes, and high cholesterol. Perls is currently studying the entire human genome, searching for genetic variations associated with other diseases that centenarians lack, as well as variations that may actively promote longevity.

But long life isn’t just a lucky break. Scientists’ best estimate, largely based on a landmark Swedish study of identical and fraternal twins, is that genetic factors account for only 20 to 30 percent of a person’s lifespan. Environmental and behavioral factors dictate the other 70 to 80 percent.

Much of what researchers know about how to reach extreme old age sounds like basic public health advocacy:  Don’t smoke. Drink in moderation. Eat healthy. Exercise regularly. “What we can do to live longer is no secret,” says Peter Martin, who directs the Gerontology Program at Iowa State University and was a key contributor to a study of centenarians in Georgia, the Georgia Centenarian Study, which ran from 1988 to 2006.

But what is new is the growing evidence that our personalities affect our longevity. It’s easy to know what it takes to stay healthy. More difficult is believing we have the power to control our lifespans, mustering the will to make good choices, and simply loving life enough to make long-term investments in our health. “It’s personality,” says Martin, “that turns these things on.”

Though every centenarian is unique—they vary widely in terms of education, socioeconomic status, religion, and ethnicity—Martin reports that, as a group, they exhibit a distinct constellation of personality traits. For instance, they tend to display relatively high levels of what psychologists label “competence”—the ability to achieve goals—and “conscientiousness,” or self-discipline. These qualities may make it easier to follow through on the healthy habits the rest of us resolve to keep each New Year’s Eve but abandon by the end of January.

“It’s amazing how cognizant they are of the need to exercise and not just leave it to chance or nature,” says Lynn Peters Adler, who runs the National Centenarian Awareness Project, an advocacy group that celebrates the pleasures and accomplishments of aging. “One woman I know walks a mile every morning, no matter the temperature.” This may sound like a strict and dreary regimen, but Adler notes that there’s an exciting reason for it: This woman loves hiking the Grand Canyon, which she has done nearly a dozen times since her 75th birthday.

Martin’s research suggests that centenarians also seem to be more inclined to embrace new skills and experiences, defying the stereotype of the elderly as stuck in their ways. Will Clark is living proof. Now 105, he just acquired his first computer, which he uses to email friends and to research authors and golfers in which he’s interested. He’s even taken to Googling family members. “I can’t believe the things you can call up on this gadget,” chuckles the former dentist and military man.

Elsa Hoffmann, 102, epitomizes two other traits centenarians display at relatively high levels: extraversion and trust. “I love people and I like to find out their interests in life,” she says. “We get to be intimate almost when we meet.” Hoffmann’s schedule includes lunch dates, theater outings, fundraisers, shopping excursions, bridge and gin tournaments, and—every year for the past few years—a cruise with fellow country club members.

Though she derives boundless joy from all this social activity, it also happens to be good for her: A considerable body of epidemiological research has linked low levels of social connection with higher risks for mortality. (See Jill Suttie’s Greater Good article this month for more on the cognitive benefits of social connection.)

But even when life isn’t all about world travel and intellectual discovery, centenarians still seem to have a leg up on the rest of us: Their results on personality tests show that

they may be better equipped to handle difficult situations without literally worrying themselves to death. Rosa McGee, for instance, has lived through cancer, the death of her husband of 25 years, and a foot condition that renders her essentially homebound. Yet her daughter Clara Jean describes her personality simply as “sweetness. She never fusses, never argues, never complains. It’s a contentment that is beautiful.”

Indeed, research also shows that centenarians are more likely than younger adults to engage in “cognitive coping,” using mental strategies to tackle difficult situations. Martin says he has seen centenarians take a variety of approaches to combating stress and negative emotions. Some write poetry about the loneliness of old age or the misery of illness; others replace lost physical pursuits with mental ones, like reading, or take comfort in deep religious beliefs.

None of these coping strategies are particularly innovative. But Perls, Martin, and their colleagues argue that they can add up to a lifetime’s worth of healthy stress-management. Centenarian research shows that avoiding anxious or neurotic behavior may not only help us increase our lifespans but better enjoy those extra years.

A higher bar for aging

Given how “fantastically well” he has seen his study participants doing in the later stages of their lives, Perls is frustrated by what he sees as our culture’s obsession with youth. He laments the fact that “we have an entire industry that tries to stop aging—it’s all nonsense.”

Leonard Poon, who heads the Georgia Centenarian Study and is a professor of public health and psychology at the University of Georgia, says it’s not just popular culture but politicians who are short-sighted in this regard. Poon bemoans the lack of congressional support for the fields of gerontology and geriatrics. “The White House Conference on Aging is held every 10 years to get grassroots recommendations,” explains Poon. “In the last one, President Bush did not show up.”

Their lack of political clout is ironic; in his interviews with centenarians, Martin has found that many are acutely interested in politics, and love discussing issues like the national debt. He says this vigorous involvement in community life is a joy that old age shares with youth.

But there are also new joys that take shape as one gets older. There is, for instance, the pleasure of what Martin calls “weaving your own life story and making sense of why we’re here.” It’s a pleasure that McGee clearly enjoys when she talks about her role orchestrating a year’s supply of food for a church in Mexico, and that Hoffmann feels when she fixes broken toys for her great-grandchildren and speaks to elementary schoolchildren about her life’s experiences. And there is, still, the pleasure of exploration. Clark reveled in it recently, when he bought a van and went on a 5,000-mile road trip across the Midwest with his wife, herself 102.

Rising life expectancy rates mean that most of us will live longer than previous generations. What remains in question is the quality of life we’ll have at 80, 90, or 100. Martin contends that the answer lies in the attitude we cultivate in our younger years. “Imagine that you’re 95,” he says. “You can’t see, you can’t hear, you’re lonely and dependent on other people—and it’s because of the anxious, disagreeable attitude you had all your life.”

On the other hand, he says, developing a positive attitude towards life while we’re young, though challenging at times, can set us up to be happy, healthy, and independent in old age.

In other words, aging well isn’t just a project for the elderly. It’s something we can work toward our entire lives.

“For our parents, the standard was aging gracefully,” says Adler. “The bar has been raised. Let’s aspire instead to age excellently.”

Will you live to 100? Check out researcher Thomas Perls’ “Living to 100 Life Expectancy Calculator,” which asks you questions about your health and family history, then uses medical data to estimate how old you’ll live to be.