There’s a certain logic to the idea that greed is good when resources are scarce: when there’s not a lot to go around, what could be better than hogging the goods for oneself to ensure one’s survival?

If this logic were to hold true, one would expect natural selection to have favored self-interested behavior as a response to a lack of resources. In fact, however, new research seems to suggest just the opposite.

My colleagues at Berkeley have found that across many indexes of self-interest, those with fewer resources choose a strategy of sharing their limited resources with others.

In one example, the researchers had upper- and lower-class individuals play a simple economic game, in which generosity could be measured directly by the amount of money that participants decided to give to an anonymous game partner at their own expense. Lower class participants allocated more of their money to their anonymous partners than did upper class individuals, who kept more for themselves. 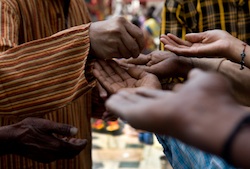 These data are in line with national survey data showing that, relative to their income, lower-class individuals give more to charitable causes relative to their high class counterparts. (It’s also consistent with many studies; see “Low Income People Quicker to Show Compassion” and “The Poor Give More.”)

This is a striking finding, particularly because the researchers found greater support for charitable causes among participants who had been induced to compare themselves to those higher in social class than they. Something about being “lower on the ladder” seems to draw out a motivation to share, rather than hog. What is it about a lack of resources that reduces self-interest and greed?

The researchers argue that when people have few resources, they are in a position of being more vulnerable to the whims of the context or the environment. Thus, when resources are not secure, people may actually be more motivated to strengthen their social connections, fostering a host of psychological processes that include trust, compassion, and empathy.

By contrast, when one is relatively resource-rich, one has the luxury of focusing on oneself, and feeling that others don’t matter as much. Psychologically, this focus on the self reduces attention to the needs and even the emotions of others. Paradoxically, then, greater resources may make self-interested and even greedy behavior more likely.

Historically, science has tended towards a fascination with the darker impulses of life, such as anger, aggression, and greed, and relegated more positive conditions such as love and altruism to the hopey, gooey world of non-scientists.

As my colleague Dacher Keltner argues in his book Born to Be Good, however, there is now growing evidence for the importance of cooperation and compassion in many different social animals, with “sticking together” making survival significantly more likely than the strategy of “dog eat dog.”

Hello - I wonder if this could is highly related to
the culture we find ourselves in.  The current
typical western culture seems to value highly
material possessions.  So maybe as our material
possessions increase so does our sense of
separateness - we see more of ourselves in the
possessions we have, so give less.  Conversely as
our material wealth decreases so does our sense of
separateness from others and hence we give
more.  Not sure it is correlated but made me think
this way. Great piece of research… thanks for
sharing
Darran
http://www.awarenessinaction.org/blog