In a hard-to-find windowless room deep inside a New York university, some difficult conversations are taking place. But this is not unusual, because this is a Difficult Conversations Laboratory. 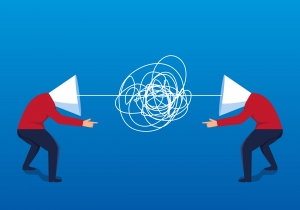 Though it does not physically resemble a dungeon, it probably should. Researchers conducting experiments here routinely generate the kind of excruciating discomfort that most of us spend every family gathering trying to avoid.

Participants sign a waiver warning them that the experiments could cause stress or unpleasant feelings, before they are surveyed on a range of fraught topics, from abortion to the Israel-Palestine conflict. They are paired with someone who utterly disagrees with them and asked to talk things through around a small conference table. All while being recorded.

It does not always go well—but that’s the point.

“It is hard to study real-life, intractable conflict as it happens,” says the social psychologist Peter T. Coleman, who started the lab over a decade ago with a group of colleagues. “This is an attempt to get as close as we can.” So far, the lab and several satellites worldwide have hosted and analyzed nearly 500 contentious encounters.

So, as part of a longer piece of work on conflict, I visited Columbia University earlier this year to learn how its findings could be applied to the hyper-partisanship that has gripped the U.S. When asked in experiments to distribute hypothetical scholarships or cash awards, Americans are now more likely to discriminate based on political affiliation than on race. Manipulated by politicians, pundits, and special interests, too many people have collapsed into lazy prejudice.

So I sought out people who know conflict intimately and have developed creative ways of navigating it: mediators and other people who work with livid spouses, feuding business partners, and spiteful neighbours. They understand how humans behave when they feel threatened and angry—and how to break through to something more interesting.

In the lab, after each conversation ends, the participants listen back to the recording and report their emotions at each point. When that data was fed into a graphic display, the researchers noticed something interesting.

The better-quality conversations looked different: The patterns resembled a constellation of feelings, like data points spread across the galaxy of emotions, rather than a simple back-and-forth tug of war.

In these conversations, people still experienced negative emotions, but not consistently. They cycled through frustration and discomfort, but also demonstrated a flexibility absent from the conversations that got “stuck.”

“It’s not like they give up and say, ‘Oh, you’re right.’ Nobody does that,” Coleman says. “But there’s more balance—of having your position and also being willing to ask questions.”

The contrast with the other conversations was clear. “People who get stuck, they collapse into negativity. Everything the other person says is wrong and stupid. It’s an emotional collapse and a cognitive collapse—because they stop being able to process anything that the other person is saying.”

Is this determined by the temperament of the people involved? Or is something else at work, something that could be induced in stressed-out Americans?

One condition that matters is subtle but logical: It turns out that when people build up even a small buffer of goodwill, their conversations go much better. Specifically, people need to have about three moments of positive feelings for every one moment of negativity. (The marriage expert John Gottman has found that married couples need a slightly higher ratio of about five good moments for every bad one—more evidence that marriage is harder than politics.)

This 3:1 ratio is the first critical lesson in inducing complexity: Goodwill is the gateway drug for listening. “People need to have some balance of experience, of feeling like they’re heard, [to be told] that’s an interesting point they made,” Coleman says. “Then they stay in the more complex, nuanced place.”

So complexity can be cultivated. But how do you generate goodwill in a debate about abortion with a stranger who vehemently disagrees with you?

Gary Friedman has mediated more than 2,000 conflicts in his career. To create goodwill, Friedman practices a strategy called “looping for understanding.” You distill the essence of what the other person is saying, and then play it back to them. There’s no need to agree with the person—or even to pretend to like them. “The point is not to convince, nor to contradict, nor to take exception to, nor explain away,” as Friedman writes in Challenging Conflict, which he co-authored. “The point is to understand.”

We are wrong more often than we think. To understand what someone really means requires a lot of double-checking. It seems obvious, a bit contrived, but it works like magic. Training with Friedman and a dozen other mediators earlier this year, I practiced looping and being looped, over and over again. I was humbled by how often I thought I’d understood the person, but had missed some important nuance.

Later, as an experiment, I tried looping my 11-year-old son when he complained about having to go to bed. “You’re really frustrated that you can’t stay up later,” I told him. He went to bed.

Using techniques like looping to build goodwill is helpful and important in our own conversations, but it can’t compete with the impact of cable news and talk radio. Is there a way to induce complexity at scale, regardless of how much goodwill we each can generate?

You can handle the truth

Back at the Difficult Conversations Lab, researchers tried another experiment. Before participants met, they were given one of two versions of an article to read about a controversial issue such as immigration.

One version laid out both sides of the issue, for and against immigration. The other contained the same information, but included more complexity, offering a spectrum of opinions. It read less like a traditional news story and more like an anthropologist’s field notes.

Psychologists call this process “priming”—preparing participants to think in certain ways. The idea here was to prime one set of participants for complexity.

Again and again, people who read the more complicated article went on to have richer conversations. They asked more questions, proposed higher-quality ideas, and left the lab more satisfied with their conversations.

“They don’t solve the debate,” Coleman says, “but they do have a more nuanced understanding and more willingness to continue the conversation.” Complexity is contagious.

The lesson for journalists like me was clear: Embrace complexity. Highlight nuance, contradiction, and ambiguity wherever you can find it. For one thing, complexity leads to a fuller, more accurate version of reality. It also increases the odds that new information will be taken seriously.

But journalists almost always do the opposite. Reporters cut the quotes that don’t fit the narrative, or our editor cuts them for us. We look for coherence, which is tidy and natural.

But in a time of high conflict, coherence is bad journalism, bordering on malpractice. Tidy narratives gently warp reality until one side looks good and the other looks evil. Then our audiences soothe themselves with the knowledge that all Republicans are racist rednecks—or all Democrats are precious snowflakes who hate America.

In reality, racist beliefs cross party boundaries. One in four supporters of Hillary Clinton in 2016 believed black people were lazier than white people. That doesn’t mean racism didn’t influence the election, only that it interacted with other forces, in many ways, in all kinds of people.

In other words: It’s complicated.

This article is adapted from a longer version published on The Whole Story by The Solutions Journalism Network.