The 2022 U.S. midterm elections ran relatively smoothly and faced few consequential accusations of fraud or mismanagement. Yet many Americans don’t trust this essential element of a democracy. 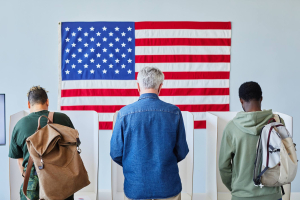 It’s dangerous for peace and stability when the public doubts democratic elections. Disastrous events like the insurrection by supporters of President Donald Trump at the U.S. Capitol in January 2021 make that clear.

But there are subtler effects of such doubt. Trump isn’t the only instigator of this distrust, which he sowed with his false assertions that the 2020 presidential vote was “rigged” and that he was the legitimate winner of the election.

Study after study—in both the U.S. and around the world—make clear that trust in elections predicts whether a person votes and decides to participate in politics in other ways, like attending peaceful demonstrations or even discussing politics. If people don’t think that elections are fair, then they don’t see the point in taking the steps that maintain democracy.

Healthy democracies are countries where regular elections lead to peaceful transfers of power. Citizens are essential to this process, especially as their votes and peaceful protests hold politicians accountable. Their beliefs about election credibility determine whether they are willing and able to play this role.

The consequences of the Capitol riot continue to loom large. The congressional hearings investigating the January 6 insurrection have revealed the extent of then President Trump’s desire to challenge the legitimacy of Joe Biden’s victory. In behind-the-scenes footage from his address on January 7, 2021, to the nation, Trump said, “I don’t want to say the election is over.”

Trump’s actions on January 6, 2021, were hardly the first time he sowed distrust in American elections. While campaigning in 2016, he warned the election could be “rigged” and called on his supporters to be “Trump election observers.” Trump built on the claims of earlier Republican politicians who for years stoked fears about what they called “voter fraud,” even though nonpartisan experts demonstrate such fraud is rare in American elections.

Although GOP politicians have done the most to sow distrust in American elections, some Democrats have also questioned the fairness of elections. In 2018, Stacey Abrams acknowledged losing the race for governor of Georgia to incumbent Brian Kemp, but said “the game was rigged against the voters of Georgia.”

Waning trust in elections not only turns off voters, but it also leads to other problems. Trump supporters deliberately overwhelmed local election officials before the midterms with information requests related to 2020 voting records. Other voters were “angry and confused,” uncertain about how to vote by mail and voting machines.

This situation is made worse by polarization in the United States. Many members of the American public will incorrectly question the accuracy of the midterms. As political scientists who study elections and democracy, we anticipate that post-election distrust will be especially high among the voters who supported candidates who lost.

Polarization widens the gap in trust between election winners and losers because partisans rely on different news sources, and some of them may even start to care more about their party winning than about democracy.

There was an even larger partisan gap after the 2020 presidential election, with Biden’s supporters expressing twice as much confidence in the election than Trump supporters. And the aftermath of that election is well known—the January 6 insurrection.

Can Americans’ trust in elections be rebuilt?

Answering that question is complicated by the country’s decentralized system of election management. Researchers have found that trust can be enhanced when whole countries reform their electoral systems to make them fairer and more transparent. Although American elections are democratic, it is difficult to highlight specific qualities—or implement reforms that would make elections even better—because election administration varies from state to state.

Poll worker training and other measures that make it likely that voters have a positive experience on election day can improve Americans’ trust in their elections. This will likely happen at a local level.

Another way that countries help the public understand election quality is through positive reports from trusted election observers, both domestic and international. More than 80% of national elections in the world have international monitors present. But, according to a study by the Carter Center and the National Conference of State Legislatures, 15 American states do not allow nonpartisan election observers to monitor polling stations. These states generally do allow partisan election observers, so that means citizens will be able to rely only on party-aligned reports—which citizens may not trust.

One valuable reform that would enhance the public’s trust would be to make it possible for nonpartisan groups to observe American elections more widely. In fact, many of the leaders in this practice abroad—like the Carter Center and the nonpartisan National Democratic Institute—are based in the U.S.

There is precedent for monitoring in American elections by such groups as the nonpartisan League of Women Voters. The U.S. government has also invited observers from international organizations, such as the Organization of American States and Organization for Security and Cooperation in Europe, to monitor elections under Presidents George W. Bush, Barack Obama, and Trump.

Giving monitors access to more state elections and publicizing their work is a step toward rebuilding Americans’ trust in elections. We know this from national surveys of the American public we conducted around the 2016, 2018, and 2020 elections. We consistently found that telling Americans that monitors reported the elections were fair increased citizens’ trust.

Steps like allowing nonpartisan monitors and publicizing their positive assessments can only go so far toward reversing Americans’ declining trust in elections.

If politicians continue to express doubt about the fairness and legitimacy of American elections, whether warranted or unwarranted, the damaging effect of their messages will be difficult to correct.

And some elected officials are taking steps to actively undermine not just perceptions of election credibility, but election integrity itself. For example, the nonpartisan organizations States United Democracy Center and Protect Democracy in August 2022 identified 24 bills that have been enacted across 17 states that politicize and interfere with professional election administration.

The politicization of election administration threatens to further erode public trust in election integrity. Democracy depends on the public’s active participation in elections and acceptance of their results.