Over the past two months, the U.S. has endured a historic political breakdown, with President Trump, leading Republicans, and millions of voters refusing to accept the outcome of the November 3 election. Their sustained challenges culminated in the shocking January 6 assault on the U.S. Capitol and in the impeachment of the president. 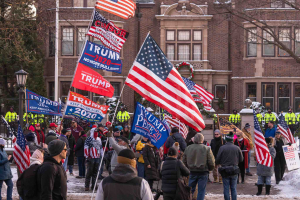 But underlying these alarming crises is another breakdown, quieter, but insidious: a breakdown of trust so severe that it has, in effect, transformed America into two nations in conflict over economic security, race, religion—and the character of democracy itself.

“I’m worried,” said UC Berkeley political scientist Henry Brady, dean of the Goldman School of Public Policy. “The republic is as frayed as it’s ever been since probably the mid-19th century, in the period just before, during, and after the Civil War.”

Brady has conducted extensive research on trust in America, and in a recent paper described how a longstanding but unspoken agreement on fundamental values has been falling apart for the past 50 years. In a Berkeley News interview conducted as the Trump impeachment trial was underway in Washington, D.C., Brady assessed what’s ailing the nation and how it might be repaired.

Berkeley News: In the aftermath of the election campaign and the attack on the Capitol, the divisions fracturing the U.S. seem so deep and profound. If we can’t even agree on the verifiable fact that Joe Biden and Kamala Harris won the election, how can we begin to rebuild trust? 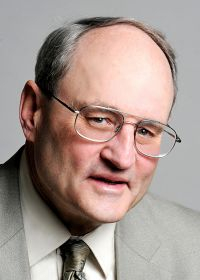 Henry Brady: The impeachment is something that has to be done to help repair it. There needs to be a statement by Congress that, in fact, what was done was wrong. The fact that the vote to impeach was to some degree bipartisan—that will make it harder for people to claim that Donald Trump was framed and didn’t do anything wrong.

The Biden administration’s greatest task is to make sure they do two things: One, tame COVID. Two, get jobs and relief for people and make sure the economy comes back. If they do those two things, that could, to some extent, restore faith in government and increase trust.

Also, we’ve got to get away from the notion that we’re going to constantly destroy norms, which is unfortunately what the Trump presidency has done. We need norms, we need standards. The standards are: Truth matters. You have to have respect for the military and the police. And you have to have institutions that deserve respect, so that we can work together and get things done in society.

BN: If you were advising the Biden administration about building trust beyond COVID-19 and beyond the economy, what would you tell them?

HB: Make sure that there is respect across cultures. Because he is a practicing Catholic, he has a chance to reach out to evangelical churches and have some impact here. He has a chance, because of his background, to reach out to police and the military and, on the other hand, to reach out to African Americans and to poor people. And so, maybe demonstrate in his actions that he thinks that everybody should be respected.

We’ve also got to think about what to do about the Internet. We can’t continue to have a mechanism that, on a daily basis, can be used to break down norms or defile American democracy. I don’t think government regulation is the answer, but I think we might want to try to see if we can’t figure out ways to create a more civic-minded social media.

BN: What’s the state of trust in America right now?

HB: I’m really worried about it. Up to about 40, 50 years ago, people trusted major institutions in America. The only institutions that really had polarization with respect to trust were business and labor, with Republicans trusting business more than Democrats and Democrats trusting labor more than Republicans.

Now, we have social and cultural cleavages that have arisen since the administration of Richard Nixon, and then George McGovern (a Democratic U.S. senator from South Dakota) was a piece of it when he ran for president in 1972. American politics started focusing on issues that went outside the economic sphere, issues that related to culture—social issues like prayer in the schools and same-sex marriage, abortion.

These issues evolved into the culture wars that led to polarization in people’s attitudes toward institutions that we would think of as essentially nonpolitical and more or less neutral: from the police and the military to religion and higher education, science, the press, and even K–12 education.

Now, we’ve got these tremendous differences of opinion between Republicans and Democrats, basic cultural and moral differences, and differences in their trust of institutions.

HB: No. In 1974, essentially all of our major institutions were trusted more or less equally by both sides, except for business and labor. Today, 45 or 50 years later, there is tremendously different trust among Republicans and Democrats for those institutions.

BN: You coauthored a paper last fall with Berkeley political scientist Thomas Kent that described growing polarization of trust focused on nonpolitical organizations—universities, the military, journalism, schools. Could you describe those findings?

HB: This paper was the first to note the polarization of trust in those institutions. Republicans think that journalism, higher education, science, even to some extent K-12 teachers are all Democrats and therefore not to be trusted. And then the reverse is true. Democrats think that religion, especially fundamentalist religion, the military, and police are all peopled by Republicans and therefore not to be trusted.

We also thought that maybe people don’t think that an institution is satisfying the requirements that it should satisfy. By that I mean the police are unfair, for example, or that higher education is not truthful. And, indeed, there’s some of that.

But the thing we keep coming back to is that people hold the strong belief that those institutions are suddenly beehives of folks of the opposite party and therefore not to be trusted. That wasn’t so 50 years ago. There wasn’t that perception.

BN: Are such perceptions intertwined with how we define ourselves, our sense of self-identity?

Let’s not forget the Internet and how that’s allowed fringe groups to get together in a way they never could before.

We know that social media provides a mechanism whereby we get these inbred social groups. They just talk to one another and take as verifiable fact things which are just false. There are no institutions that can break that circle, especially on the Republican side, because they just don’t believe in the mainstream media or science or higher education.

BN: Does that kind of distrust and polarization get worse in a time of political, economic, or cultural stress?

HB: Yes, I think so. And obviously, Donald Trump has played on it. He has used those divisive stereotypes to try to ignite his base. And he’s been helped by Internet news sources, conspiracy theorists, and all the other media sources that have helped fuel what he’s created.

On the left, we have calls to defund the police, for example. Some people might say, “Well, that’s crazy. We have to have order in society. Does that mean that basically anything goes?” And so, people on the right get terrified.

Also, and this is particularly true in universities, the left is often not knowledgeable about religion in America. Most Americans are much more religious than the very secular people we find in universities or among journalists.

BN: How important are race and racial tension in our current environment of distrust?

HB: There’s no question that race continues to be very important.

Johnson was from Tennessee, a conservative Southerner, and he tried to continue Lincoln’s policy of conciliation with the South, although he had none of Lincoln’s talents for compromise and for bringing people together, and he did not have Lincoln’s concern for justice for African Americans. He was ultimately impeached (but not convicted) on the grounds that he had not pushed Reconstruction as far as it should have been pushed.

With Johnson, it was all about race. Should African Americans have the franchise? That was one of the major issues then. That’s not so obviously the issue now, but certainly there’s the issue of whether African Americans will finally receive justice in America, and it seems like we have not moved far from the late 1860s.

BN: It has often seemed that Trump and his allies have cultivated distrust of Black Lives Matter. Some are playing on that now to deflect from their responsibility for the attack on the Capitol, which included many white supremacists and white nationalists.

HB: I wrote recently on the Goldman School website how Donald Trump, on one hand, was going on and on about how illegitimate the election was, and on the other hand, he’s never accorded any legitimacy to George Floyd (who was killed by police in Minnesota) and the concerns about the murders of African Americans by police.

And now we have Republicans who are arguing an equivalence between, on the one hand, some of the things that happened last summer with the Black Lives Matter protests and all that happened at the Capitol. They are trying to say it was the same thing, and they are implicitly trying to say that the president can’t be blamed.

They completely miss the fact that the Black Lives Matter protesters were animated by the police murder of a Black man, on videotape.

BN: Isn’t there a real economic and maybe a cultural displacement of white men—and doesn’t this also feed the mistrust?

HB: There is a way of life that the Trump people want to protect—and they have some legitimate grievances. There’s no question that the Rust Belt was devastated by global trade, and that liberals didn’t take that into account or do much about it. On the other hand, the notion that white men should continue to have superiority in this country 150 years after the Civil War, we need to get beyond that.

Political leadership seems so important in the nurturing of trust. But don’t leaders also try to erode it, intentionally? I’m thinking of efforts on the right to use race-based distrust to manipulate and activate hostility in their base.

There’s a long tradition of pitting the races against one another as a way to win elections. George Wallace did it. And I fear that that’s what Donald Trump’s been doing, too.

The sad, terrible truth about America is that 150 years after the Civil War, we haven’t gotten beyond it.