Children notice difference across racial lines. Even from a very young age, babies scan a face differently if it belongs to someone of a different race, suggesting that racial bias may be hardwired.

But noticing difference is not the same as having negative or positive beliefs around difference. Those types of judgments develop over time and are influenced by many things, including the social climate children grow up in and the experiences they have that confirm or disprove their biases.

This is where parenting comes in. Though it’s clear that parents are not solely responsible for biasing their kids one way or the other, science suggests that they do play a role—and an important one. In fact, their influence may extend well beyond a child’s early years and into adolescence.

Though how this works is not totally clear, recent research has shown that the process starts early and involves both explicit (deliberate) and implicit (unconscious) messages that parents send to their children. This is the good news: Parents can be a positive force in combating prejudice in their children. But the “bad news” is that kids can easily pick up prejudice from society at large unless parents do something about it.

Here are some of the ways that parents can help reduce negative bias in their children.

1. Expose kids to more positive images of other racial groups 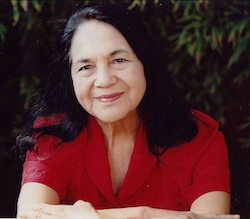 Dolores Huerta is a civil rights activist who cofounded the United Farm Workers. © Flickr / Freedom To Marry / CC BY 2.0

Kids are immersed in negative stereotypes perpetuated by the media and culture, just as adults are. To counteract that, parents can expose kids through stories, books, and films to more positive, counter-stereotypical images of people from different racial and ethnic groups—including moral exemplars like Martin Luther King Jr. or Dolores Huerta. In studies with adults, this type of intervention has been shown over and over to be one of the most effective ways of decreasing bias.

Though less is known about how this might impact children specifically, at least one study suggests that they benefit, too. Researchers presented white and Asian children ages 5-12 with four positive vignettes involving admirable black people (such as firefighters or doctors), admirable white people, or flowers and then measured the kids’ implicit biases towards black people. Being exposed to the positive vignettes significantly reduced implicit bias in children nine years of age and older—though not in the younger children.

“Hearing these stories, the kids are internalizing an association between the group they’re hearing about and positivity, and that counteracts the stereotypical associations that they may already have,” she says.

However, just because younger children were not moved by the stories in her experiment doesn’t mean we shouldn’t expose younger kids to positive images, as well, Gonzalez believes.

“If there were more exposure and more exemplars, there’s a chance that might be enough to change associations” in younger kids, too, she says. 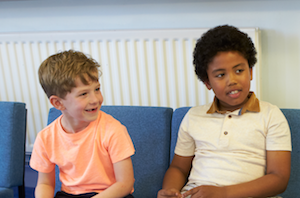 Research suggests that cross-race friendships are an important factor in decreasing prejudice, probably because they help decrease stress and fears of rejection that may occur in cross-group situations. Having a friend from another group may also remove barriers to empathy and caring, which in turn decreases prejudice.

Research shows that having contact with different racial or social groups—especially when that contact is warm and positive—helps to decrease prejudice and to encourage more cross-group friendships. In a study with school kids of various ages, students who had higher levels of cross-race contact—including cross-race friendships—were more likely to see the way race plays a role in social exclusion and to view that behavior negatively.

In one study, German teens who established a cross-group friendship during a three-year period demonstrated lower prejudice toward immigrants at the end of the study than those who hadn’t. In addition, the teens were more likely to develop cross-group friendships when there were more kids from different groups and more positive social norms concerning cross-group friendships in their community. This suggests that opportunity—meaning, living in diverse neighborhoods or going to integrated schools—is important.

Psychologist Rodolfo Mendoza-Denton encourages parents to take an active role in supporting cross-race friendships in their kids by organizing play-dates, inviting kids over to their houses, offering rides to sporting events, and creating other opportunities for their kids’ cross-group friendships to form.

“The default is to do these things with people with whom you already have an affinity,” he says. “You need to help scaffold these social experiences for your kids and be more intentional if you want to be sure that cross-group friendships happen.” 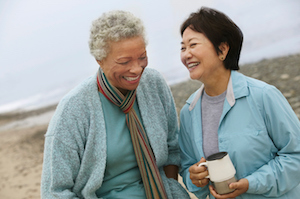 Parents can help normalize cross-group friendships by role-modeling them for their kids. This may seem superfluous, but research has shown that children’s racial attitudes are less tied to parents’ explicit messages around race than to the racial makeup of the parents’ social network.

Why does having cross-race friendships have such a strong impact on bias? Mendoza-Denton says that when you develop a cross-race friendship, you incorporate your friend’s struggles, motivations, and thoughts into your own self-concept—not in a way that’s confusing, but more expansive. For example, he says, you start to feel what they feel and empathize with them: maybe sweating when they give a talk or suffering when they experience heartbreak. And that experience of “inclusion of the other in the self” decreases bias against that person’s social group.

“It’s so much more organic to reduce bias by developing intergroup friendships, because it changes your attitudes through a very human mechanism, which is the interpersonal,” says Mendoza-Denton.

Though adding people to your social group based simply on race is probably unwise, it’s possible to search for common interests with people of different backgrounds, making it more likely that a friendship will happen naturally. Once friendship grows, empathy develops organically, says Mendoza-Denton.

4. Talk explicitly about race and the effects of racism 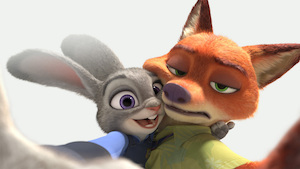 Zootopia is a fun animated film that raises serious questions about prejudice.

Many black parents give explicit instructions to their kids about the importance of race in society and what they can do to mitigate any bias they encounter. But well-meaning white parents are less likely to bring up race with their children, perhaps fearing that doing so would mean they don’t value egalitarianism or believe in a “post-race” society. The problem with that approach is that not talking about race can create a vacuum of information, which leads children to absorb biases around them—often in ways that are counter to parents’ own held values.

In one study, researchers had white parents read books depicting racial issues to their preschool-aged children (under the guise of studying the effects of literature on learning) while being videotaped. Racial attitudes were measured and compared afterwards in both parents and their children.

Later analyses of the videos showed that many parents avoided mention of race—even if their children asked about it—and used “colorblind” approaches to the issues raised in the book. For example, they might say, “It’s important to be nice to everyone” rather than something about race. Though the parents assumed their kids would absorb their colorblind ideals and hold favorable views of African-Americans, the children’s views weren’t in line with these expectations, suggesting that a colorblind approach does not decrease biased attitudes in kids.

In fact, research suggests that parents need to be much more explicit about racism and its effects. When white parents were asked to have race-related discussions with their kids—either with or without watching educational videos about race—their children showed more favorable attitudes toward racial outgroup members only if their parents discussed race directly. Interestingly, though, the researchers had trouble getting the parents to have these discussions—even when instructed to do so as part of the study. Apparently, there are psychological barriers to discussing race among many Caucasian parents.

How can parents overcome these? It’s not easy, says Mendoza-Denton, because if you aren’t comfortable, you will avoid the topic. He suggests that parents need to increase their own comfort first by developing connections to people from other racial groups. That will make it easier for parents to have these conversations without resorting to fear and avoidance.

If you can overcome your own discomfort, there are many children’s books that expose kids to the values and experiences of different groups and could be conversation starters. Or you may want to follow Allison Briscoe-Smith’s advice on how to use the movie Zootopia to talk to your children about racial prejudice.

5. Work to combat biases in yourself 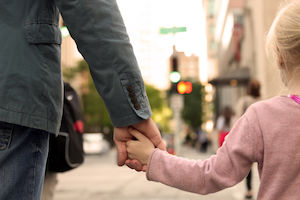 Research clearly shows that the impact of parent bias on kids shouldn’t be underestimated. Although explicit biases have negative effects on kids, implicit bias can also impact children.

In one study, researchers found that very young children exhibited more explicit negative bias if their mothers held implicit biases—regardless of their explicit messaging. There can be a mismatch between what parents say and their unconscious reactions toward minority groups—and children seem to pick up on this.

Though implicit biases may seem an impossible thing to control—after all, they are supposed to be unconscious—they are quite changeable with conscious effort. Research suggests that automatic biases can be countered by deliberate attempts to counter them, exposure to moral exemplars, or positive cross-race interactions. In other words, much of what influences children may also influence you.

Becoming more aware of subtle prejudices may be the first step, and you can always take an implicit bias test if you want to learn about yourself. But Mendoza-Denton believes that this information is most useful in parents who are truly willing to attend to their biases; otherwise, learning about their implicit biases could possibly backfire, making them feel exposed and defensive and increasing their avoidance of the issue.

In addition to developing cross-race friendships, he advises parents to read books, watch films, and consume media not aimed at them. For example, to understand the viewpoints and experiences of blacks, a white parent might read Ta-Nehisi Coates’s book Between the World and Me, or see the movie I Am Not Your Negro. Doing so may counter bias by enriching understanding of another’s point of view, especially if they are motivated to foster that understanding.

Parents may think that there is very little they can do to influence their children’s biases or feel that prejudice-reduction is a daunting task. But if we are to impact bias in the long-term, we must come to grips with how bias is transmitted early in life and fed by a system of segregation and negative societal views. Parents, it turns out, can make an important contribution.