Newscasters love to share stories of kids as young as three years old calling 911 to save a parent’s life. These stories bear out what research has shown us: Very young children have a propensity to be kind and helpful. 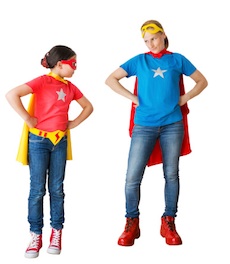 Starting as early as 18 months, studies show, toddlers spontaneously help an adult who is unable to pick up something he dropped or finds himself in a similarly tricky situation. Being kind at a cost to themselves makes two year olds happy, and three year olds who cooperate on a task share rewards even when they don’t have to.

But a recent study suggests that, like adults, kids are also subject to a major obstacle to helping: the bystander effect. That’s when being part of a group paralyzes people from coming to the aid of someone in need—a phenomenon well documented by social psychologists.

Consistent with studies of adults, researchers from Germany and the United Kingdom found that five year olds are less likely to help when other children are available, likely because they feel less responsibility.

In this study, five year olds were coloring pictures when they witnessed an adult “accidentally” spill colored water all over her desk. The researchers observed whether the kids handed her some paper towels as she showed more and more signs of needing help (starting with an “Oops” and a groan and culminating in “Could somebody give me the paper towels there?”). If the kids didn’t help at all after 90 seconds, the adult took the paper towels herself.

But there was a twist. Sometimes, the five year old was alone. But in other cases, the child was sitting with two other children who had been secretly instructed by the researchers not to help; in some of those cases, the two other children were obviously unable to help because a barrier was put in front of their desks.

Prior research suggests that people in a group are less likely to help someone in need because they each assume that one of the other people will take action—a phenomenon knows as the “diffusion of responsibility.”

That seemed to be the case in this new study. In interviews afterward, 53 percent of the children said it was their job to help when they were alone or with the kids obstructed by a barrier. But only 12 percent of kids felt that same sense of responsibility when they were with other children who could help—despite the fact that roughly three-quarters of those kids said they recognized that the adult needed help.

This study is the first to demonstrate the bystander effect in five year olds, but it takes an important step further by identifying why kids might succumb to that effect. According to the study’s lead author, Maria Plötner, a developmental psychologist at the Max Planck Institute for Evolutionary Anthropology in Germany, the results suggest that we can encourage kids to help others more by fostering a greater sense of personal responsibility within them.

Research points to a number of ways we can do this:

Taken together, the research offers a message that should be both encouraging and motivating to adults: Children already have the instinct to help, but sometimes they need a dose of responsibility to activate it.