When I was in high school, I had a lot of big questions.

I wanted to know if it was possible to devote your life to your work without compromising your integrity. I wanted to know how to be a powerful man without being a jerk. And I could not understand why so many adults seemed to be okay with the systematic injustices that plagued my hometown. 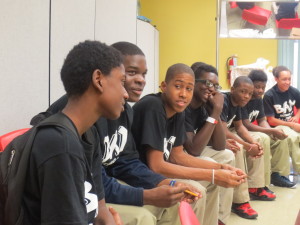 I read dozens of biographies as a teenager, in search of some answers. But for many years, I did not feel safe talking to an adult about any of this, for fear of being told I was crazy. I craved a deep connection with someone from an older generation who would hear my questions, sympathize with my confusion, and perhaps even set me on a path toward some satisfying answers.

Fortunately, the father of one my best friends took an interest in me. He was a quirky guy: He had messy gray hair, always smiled, and lived in a funky house in the woods. He was curious and caring toward me without ever being overbearing or judgmental. He seemed different from the other adults. He seemed at peace with himself, his family, his work, and the world. As a young person I understood that he had something that I wanted: a sense of belonging, of being at home in the world. My relationship with my friend’s dad opened up a whole new world for me outside the confines of traditional suburban Maryland.

As I grew older, I intentionally sought out mentors like my friend’s dad who would guide me, answer my questions, and teach me how to be a better man. These relationships have changed my life, inspired me, and helped me mature from an adolescent boy into a man.

Unfortunately, research suggests that most young people aren’t so lucky; they go on the journey from adolescence to adulthood without a mentor. The Good Work Project, a research project based at Harvard, has found that inspirational mentors and deep meaningful mentoring relationships are increasingly rare amongst young professionals.

More troubling, they have found that negative mentoring is on the rise: Without positive role models, young people were more likely to emulate elders who were widely viewed as “successful” but lacked compassion and ethics.

In my work as an educator over the past decade, I have seen these study results reflected in the lives of my students. Many of my young male students in particular look up to popular male role models who glorify greed, power, violence, and self-aggrandizement. Without compassionate role models and mentors to show adolescent boys a different path—a different way of what it really means to be a man—I fear they will continue to admire these destructive forms of masculinity.

How can we put them on a healthier path, one that leads them to embrace compassion over violence and material gain? I believe that the answer lies in a renaissance of mentoring for young people, particularly for young men.

Indeed, research suggests that intergenerational mentoring is associated with positive benefits for both mentors and mentees, including better health for mentored adolescents and, among mentors, more positive feelings about people in general.

These findings were echoed in a recent Greater Good article by Kozo Hattori, in which he interviewed a number of compassionate male leaders in our culture. He found that almost all of these men had compassionate male role models.

While it’s encouraging to see the success of programs like the Becoming a Man project in Chicago, my experiences—like the experiences of the men Hattori interviewed—suggest that effective mentoring can take place even outside of the structure of a formal program. What’s more, research also suggests that mentoring doesn’t always generate great results; the type of mentoring matters.

So for adults who have the motivation and opportunity to mentor, either within or outside of a formal program, here are eight lessons I have learned about what makes for effective mentoring, particularly for young men.

Studies suggest that young men have a particularly hard time sitting still and being with their thoughts. I begin mentoring sessions with mindfulness meditation and end with compassion meditation. Practicing mindfulness mediation helps young men experience stillness and be with their own thoughts and feelings. One of my mentees now sits three times a week for 15 minutes outside of our sessions; he says it allows him to feel more comfortable with himself.

Young men are rarely asked to envision a healthy future for themselves. But recent studies suggest that positive coaching—in which a mentor helps nurture a mentee’s aspirations and goals for growth—can help the mentee better visualize their future and deal with stress. These improvements are even reflected in changes in the neural pathways of their brain.

I ask my young men to set goals for themselves in all areas of their lives: meaningful friendships, relationships with parents and siblings, how they treat themselves and others. After one of my mentees went on a long, much-needed walk with his mom to talk about their relationship, I praised him for doing something that took a lot of courage.

I have been taking annual week-long classes taught by one of my mentors for six years. It took me six full years to really understand what he was teaching. There is a power in being patient as a mentor. This is especially true when working with adolescents. Neither of you may appreciate how you have changed their life until they are making a decision five years later and think of you and something you told them.

4. Embody what you teach

You have to practice what you preach. It sounds simple, but it is very clear to young people if you are being authentic. The Good Work Project found that positive mentors had three distinct qualities: perseverance in the face of adversity, professional creativity, and a commitment to the mission and values of their work. Young people mentored by elders with these qualities were more likely to embody these qualities themselves. This is a great benefit of being a mentor: It makes you more committed to cultivating your own positive values. 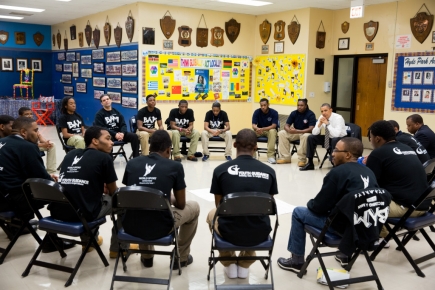 For example, one of my young guys was having a lot of trouble with his girlfriend. Without going into too much detail, I told him that I was also having a tough time in my relationship, that relationships are hard, and that there is no silver bullet. This openness created a sense of connection between us. You do not need to pretend like you know everything to be a good mentor; you just have to be real about what you do and do not know.

I had one young man whose parents really wanted me to mentor their son, but he showed no interest in repeated attempts to connect. At the end of the day, if a young person does not want to be mentored, it will not work. Similarly, you need to have a genuine connection between the mentor and mentee for the relationship to work. I met with one young man who I just could not connect with. You do not need to judge yourself or blame yourself. Just let it go and be honest about the fact that some people don’t click.

7. Don’t take yourself too seriously

Do not confuse meaningfulness with seriousness. When I first started mentoring, I made it very serious and was overbearing at times. Over the years, I learned that if I lightened up, made some jokes, and found ways to bring humor in, I invited more intimacy, connection, and made the whole thing a lot more fun (which is important if you are going to do this for many years).

Of course, there is nothing revolutionary in any of this. Humans have been mentoring humans for thousands of years. In fact for most of human history, mentoring and apprenticeships were the predominate mode of learning. As is so often the case in our culture, we need to re-learn what once was a predominant mode of being.

If you’re interested in becoming a mentor—or in finding a mentor for your child or student—I suggest thinking back on your own life. Have you had any mentors who shaped you? How has that relationship affected your life, personally and professionally? What qualities do you admire in your mentor? If you did not have a mentor, can you think of times when a mentor would have been beneficial? What do you have to give as a mentor?

Here are some other guidelines to help teachers, parents, and young people get started.

Teachers: There are a number of mentoring programs that exist at schools including this mentoring program at an independent high school in San Francisco and another innovative model at this network of charter schools.  You could think about how a mentoring program would fit at yours. Of course, this can be cumbersome and tricky to roll out on a school-wide basis.

Parents: It is critical that a youth’s mentor is not his or her parent. But as a parent, you can set up an intentional mentoring relationship for your son or daughter. Consider: Who is someone you know who you would want your child to be like? Who would be a good fit to mentor your son or daughter? Often we already know these people, but we have not asked them to be in this role (sometimes this happens through godparenting). You could ask these people if they would be willing to take on this role and see if your son or daughter would be interested. You could also find someone outside of your existing network, or ask an existing coach or teacher who you know your child gets along with and admires. Often, it simply takes a prompting conversation and setting the intention to more formally establish a mentoring relationship.

You have to see part of yourself in a mentor, but don’t search for an identical fit. And if you do find someone who you think would be a good fit, the first step is simply to ask them if they would be willing to mentor you. In college, I went to a presentation by an alum with whom I really resonated. After the talk, I asked him if he would be willing to meet me sometime, and later on asked him to mentor me. Sometimes you just have to ask! People from older generations crave connection with younger generations, and this is a way for them to feel connected and give back.