Good coaches get results, respect, and awards—just ask the three managers recently inducted into the Baseball Hall of Fame. But what makes a coach or mentor good?

One school of thought says they should hold their mentees to specific performance benchmarks and help them reach those benchmarks by targeting their personal weaknesses. 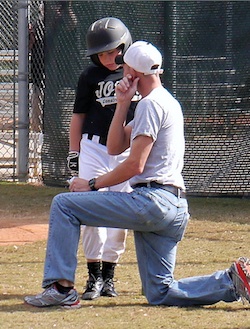 But new research suggests a different tack—namely, to nurture a mentee’s strengths, aspirations for the future, and goals for personal growth. Indeed, studies suggest that this positive approach is more effective at helping people learn and change; for instance, it helps train business school students to be better managers, and it is more effective at getting patients to comply with doctors’ orders.

A recent study indicates why this more positive approach gets better results, using brain scans to explore the effects of different coaching styles. Based on what’s happening in the brain, it seems, a more positive approach might help people visualize a better future for themselves—and provide the social-emotional tools to help them realize their vision.

In the study, published in Social Neuroscience, researchers collected data from undergraduates at Case Western Reserve University. After completing an initial questionnaire measuring their emotional tendencies, the students had two interviews within five days.

One of the interviews was a positive-based coaching session in which the trained ‘positive’ interviewer would ask questions such as, “If everything worked out ideally in your life, what would you be doing in 10 years?”

The second, “negative” interviewer took on a more traditional coaching style, with questions designed to have the students assess their performance in terms of ideal standards: “What challenges have you encountered or do you expect to encounter in your experience here? How are you doing with your courses? Are you doing all of the homework and readings?”

After both interviews had been completed, 20 of the students went into a functional MRI machine that measured their brain activity while they endured a third interview, conducted by video, with the same “positive” and “negative” interviewers appearing at separate times.

As the researchers predicted, the students indicated that the positive interviewer inspired them and fostered feelings of hope far more effectively than the negative interviewer. Perhaps the more intriguing results, though, concern the areas of the brain that were activated by the two different approaches.

During the encouraging interactions with the positive interviewer, students showed patterns of brain activity that prior research has associated with the following qualities:

These differences in brain activity led the researchers to conclude that positive coaching effectively activates important neural circuits and stress-reduction systems in the body by encouraging mentees to envision a desired future for themselves.

Although the authors acknowledge that much more research needs to be conducted on the topic, their results offer a first glimpse at the neurological basis of why people coached by positive, visioning-based approaches tend to be more open emotionally, more compassionate, more open to ideas for improvement, and more motivated to pro-actively make lasting behavior changes than are those coached in ways that highlight their weaknesses.

With more research, science “may contribute to the elaboration of a physiologically based theory of effective coaching,” they write, “capable of informing the training and socialization of people in a variety of helping professions, such as doctors, nurses, teachers, and managers, not to mention parents.”