The College Republicans here at UC Berkeley made headlines this week by holding a bake sale where the prices were on a sliding scale, depending on the buyer’s gender and racial or ethnic background. According to the organization’s president, “It’s really there to cause people to think more critically about what this kind of policy would do in university admissions.” 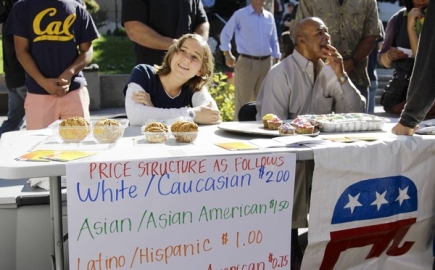 The bake sale was intended to protest legislation that will let universities in California consider a student’s background in university admissions.

At the heart of this protest is the notion that admissions should be “colorblind”—just as we should sell cookies to people on a unitary scale, so should we admit people to universities without regard to their race, ethnicity, or gender. This notion, in turn, rests squarely on the assumption that a person’s background doesn’t matter—after all, in our day and age, anyone who pulls themselves up by their own bootstraps can achieve anything they want.

Unfortunately, in our day and age, this assumption continues to be flat-out wrong.

The idea that “race doesn’t matter”—often a well-meaning call to emphasize our common humanity—can be easily corrupted to deny the reality that racism continues to pervade our society, and in so doing perpetuates educational and social inequalities. I have written (e.g., here and here) about how unconscious racism and discrimination play out in American society by allowing people to justify discriminatory behavior through alternative explanations. But unconscious discrimination is only one example of a pervasive—and invisible—process: inequality built into our institutions, our social policy, and our society that affects people of different backgrounds differentially from the day they are born.

As this controversy plays out—and it has attracted a ton of media coverage over the past few days, from the LA Times, New York Times, and beyond—a much less publicized movement has been afoot at Berkeley for some time. It’s called the American Cultures program, and it is a collection of courses that ”focus on themes or issues in United States history, society, or culture; address theoretical or analytical issues relevant to understanding race, culture, and ethnicity in American society… and are integrative and comparative in that students study each group in the larger context of American society, history, or culture.”

The American Cultures curriculum is a rich set of offerings that not only celebrates the strength of our diversity, but serves to educate us about worlds that may not be apparent to us. These courses make the invisible visible.

Rather than retribution and rage (the College Republicans have reported threats to their safety, which is the last thing we need), consider another strategy: education. Encourage our entire student body to sample widely from the American Cultures curriculum. These courses help clarify what Tim Wise, who was interviewed by CNN about this incident, meant with, “The point that I think needs to be made… is that by the time anyone steps on a college campus… there has already been 12 to 13 years of institutionalized affirmative action for white folks, that is to say, racially embedded inequality, which has benefited those of us who are white.”

Here are some examples of courses included in American Cultures:

The issue of equality and admissions is complex—complex enough that it involves questions of institutionalized racism, unconscious bias, as well as the consideration of racism against whites. But an inflammatory campus bake sale is easily interpreted as a mean-spirited way to start these discussions. If the organizers of this event want to bring attention to the topic, they might start by taking some of these courses, and by learning about some of the background, history, and psychological processes that they are glazing over with sugar and frosting.

Until then, bake sales like this are not going to tempt me to break my diet.