The secret to success, we are sometimes told, is the power of positive thinking. In fact, there’s a famous book devoted to that idea called, appropriately, The Power of Positive Thinking, and there’s a similarly themed book called The Secret. But there’s another secret, according to new research: Fantasizing about a wonderful, happy future may actually make depression symptoms worse in the long run.

It’s not that positive thinking is entirely bad for you, psychologists Gabriele Oettingen, Doris Mayer, and Sam Portnow write in Psychological Science. Indeed, in the short run, there’s some evidence that daydreaming about good things can curtail symptoms of depression. At the same time, fantasies might actually set you up for failure—you think about the good things, but don’t put in any effort to get them, then feel worse for not having achieved anything. 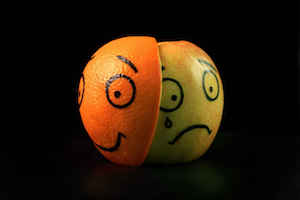 The question Oettingen, Mayer, and Portnow ask: Could dreams of a happy future actually leave you more depressed down the road?

In three experiments involving college students and schoolchildren, the researchers say the answer is largely yes. In the first study, 67 undergraduates took a survey to assess any symptoms of depression they might have before completing a series of 12 scenarios. In one scenario, the researchers had participants imagine they had asked their client for an extension on a business project. Then, the undergrads wrote down what they might do while waiting to hear the client’s response, and to rate how positive or negative their thoughts were. The students who took the survey filled out the scenarios in February and again in March.

As The Secret would have you believe, students who ended their scenarios on a more positive note presented fewer signs of depression, but only in February. A month later, exactly the opposite was true: The more they concocted positive endings to their scenarios, the more depressed they were in March, relative to how they felt in February.

That result held up in two additional studies, one involving fourth- and fifth-grade students over a period of seven months, and another with undergraduates who reported on how positive or negative their daily thoughts and mental images were. In both cases, happy thoughts eased depression in the moment, but worsened it in the long run.

The authors are careful to point out that their results do not imply that thinking happy thoughts actually causes depression—only that it seems to be correlated with depression down the road. But, taken together with other recent results, the findings suggest that thinking positive isn’t always a good idea.

“The modern era is marked by a push for ever-positive thinking, and the self-help market fueled by a reliance on such positive thinking is a $9.6 billion industry that continues to grow,” the researchers write. “Our findings raise questions of how costly this market may be for people’s long-term well-being and for society as a whole.”