After the San Francisco Giants won the World Series in 2010, first baseman Audrey Huff stood onstage at the City Hall Plaza and took off his lucky red rally thong. He’d worn that same pair of underwear (presumably washed) for all of the post-season games, refusing to wear another until the World Series was over. Considering the Giants’ winning season, Huff must have thought the effort well worth it. 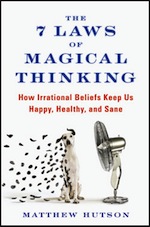 As a skeptic (or maybe a less enthusiastic team supporter), I tend to laugh at these superstitious rituals. How could a grown man believe that wearing a red thong makes any difference? But, to be honest, I wear the same pair of orange earrings to every Giants game, succumbing to superstition just like the rest of the fans and players.

What’s going on here? According to Matthew Hutson, author of the new book, The 7 Laws of Magical Thinking, we humans are prone to this kind of magical thinking, like believing objects have special powers. Even the most skeptical among us can’t escape magical thinking in one form or another, he claims, whether it’s believing in luck, assigning personalities to inanimate objects, or venerating our national flag. And, it may be that this kind of thinking serves an important purpose.

According to Hutson, magical thinking involves our minds blurring the lines between objective reality and subjective experience. For example, he writes that many people believe that personal belongings carry the “essence” of their owners. So, when researchers ask people how they’d feel about owning and wearing a sweater once worn by Hitler, most people say they’d be repulsed by the idea, as if the sweater were tainted. Similarly, married people often believe their wedding rings are imbued with special qualities, so that even an exact replica of their ring just wouldn’t feel the same.

Hutson writes that magical thinking probably exists because it’s evolutionarily advantageous. For example, the magical belief that one’s mind can control things it can’t—i.e., positive thinking will bring you wealth or love—can give people a sense of agency, make them more active participants in life, and reduce their anxiety about the future, all of which may actually help bring about the desired results.

Not only that, but, “Believing that positive thoughts work wonders will lead you to have more of them, bringing all those proven benefits of optimism and positive visualization”—another good reason to engage in it.

Of course, magical thinking can have a downside as well. It can make us vulnerable to con men who sell things or ideas that have no real value. And, in some cases, ill people might forego life-saving medication, believing they can cure themselves through the power of positive thinking or the prayer of those who live far away.

But how dull life would be if we didn’t have some form of magical thinking. Belief that you have a higher purpose in life or feeling one with the universe can buoy us and give us hope and energy.

And seriously, the 2010 World Series would have been a lot less entertaining without believing in the magic of Huff’s rally thong.

The unstated assumption in this article is that what is labeled “magical thinking” is the belief in nonexistent connections. In other words, the yielding to superstition.

Instead of yielding to it, it’s the position of present “sureness” that should be mediated if there is to be much positive change in human relationship.

We ought to have compassion, not only for ourselves, but for inescapable (and positive) ignorance, and the approximate scope of our scientific understanding of reality, dependent as it is on imposed assumptions of the limits of cause and effect.

Limiting cause and effect to consistent and repeatable generalizable observations of phenomena that are perceived by the standard senses and then conceptualizing those effects using standard scientific means into a description is a basic tool, just like a hammer is a basic and useful tool for building a house.

But a hammer isn’t the tool to build a rainforest. Houses, and rainforests may coexist. Cause and effect outside of the standard restrictions, is by definition outside of that standard perception.

Different approximations of reality. don’t necessarily rule each other out. Just as non-Newtonian physics doesn’t negate its predecessor, and is undergoing, itself, continuous change. The belief in a constructed subset of reality like present scientific perception, and that which cannot fit within its limits are complementary entities. It doesn’t have to be a war.

In relation to this article, there may more interesting examples of “magical thinking” than wearing red thongs or orange earrings in support of Giants football, but that would require a less simplistic portrayal of relationships than a mechaniistic styling and apology for them.

This is a very interesting comment about the nature
of science and human inquiry into objective and
subjective reality. I agree that our tools for
understanding reality are constantly being refined,
and that what may be magical thinking today could
end up being accepted theory tomorrow. Certainly,
our perceptions are limited, and as we seek
answers through science, we are often reminded of
that. So, thanks for bringing up this point.

I should make clear, though, that this piece is not
an article about the subject; it’s a book
review…and a very cursory one at that. I suggest to
anyone interested in this subject that they read
Hutson’s book, which goes into much more detail
and gives better examples than the one I provided
in my opening paragraph.