Psychology once assumed that most human emotions fall within the universal categories of happiness, sadness, anger, surprise, fear, and disgust. But a new study from Greater Good Science Center faculty director Dacher Keltner suggests that there are at least 27 distinct emotions—and they are intimately connected with each other.

Using novel statistical models to analyze the responses of more than 800 men and women to over 2,000 emotionally evocative video clips, Keltner and his colleagues at UC Berkeley created a multidimensional, interactive map to show how feelings like envy, joy, pride, and sadness relate to each other.

“We found that 27 distinct dimensions, not six, were necessary to account for the way hundreds of people reliably reported feeling in response to each video,” said study senior author Keltner, whose findings recently appeared in Proceedings of the National Academy of Sciences. 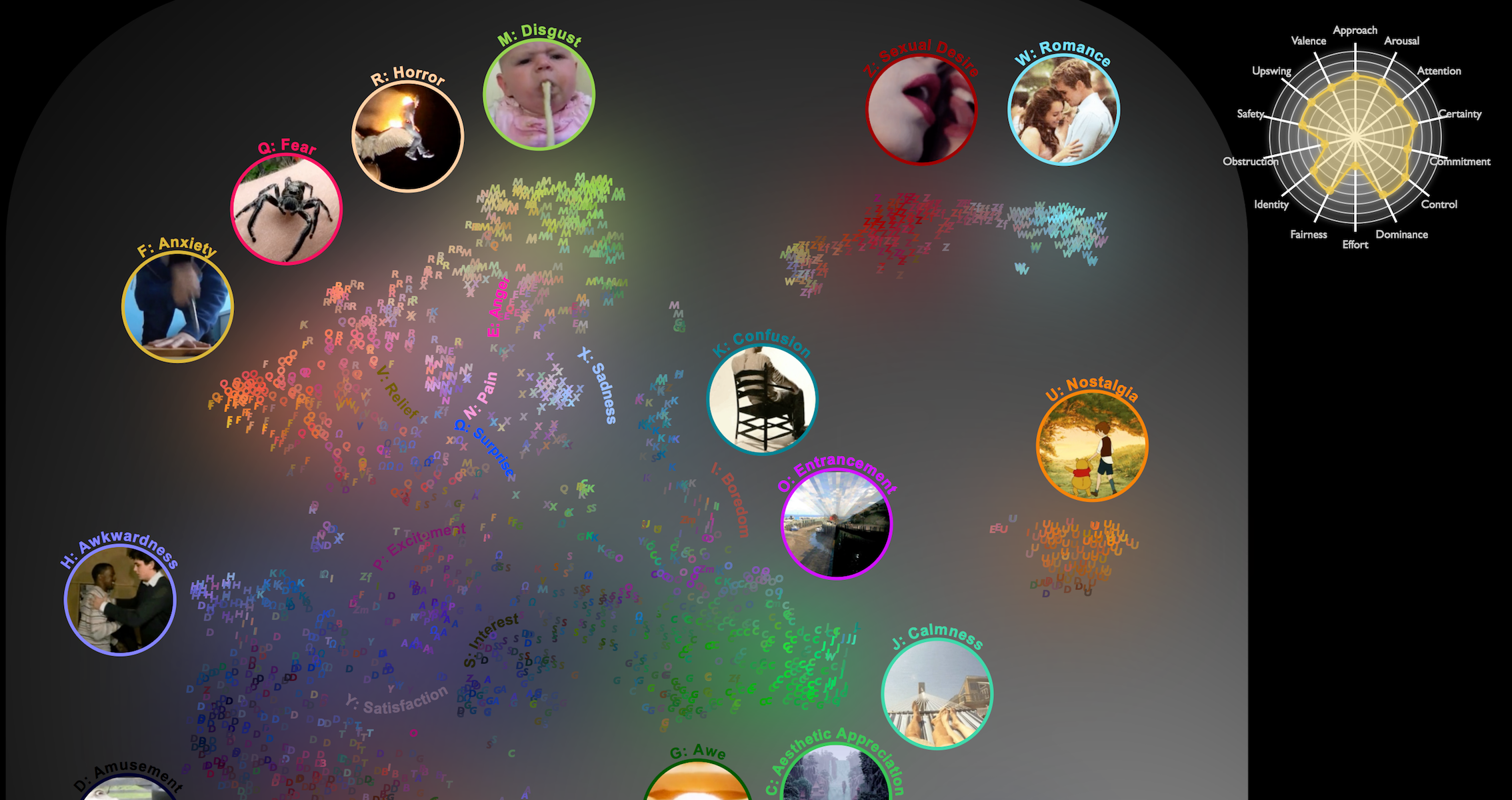 A map of human emotion

Moreover, in contrast to the notion that each emotional state is an island, the study found that “there are smooth gradients of emotion between, say, awe and peacefulness, horror and sadness, and amusement and adoration,” Keltner said.

“We don’t get finite clusters of emotions in the map because everything is interconnected,” said study lead author Alan Cowen, a doctoral student in neuroscience at UC Berkeley. “Emotional experiences are so much richer and more nuanced than previously thought.”

“Our hope is that our findings will help other scientists and engineers more precisely capture the emotional states that underlie moods, brain activity, and expressive signals, leading to improved psychiatric treatments, an understanding of the brain basis of emotion, and technology responsive to our emotional needs,” he added.

For the study, a demographically diverse group of 853 men and women went online to view a random sampling of silent five- to 10-second videos intended to evoke a broad range of emotions.

“There are smooth gradients of emotion between awe and peacefulness, horror and sadness, and amusement and adoration”

Three separate groups of study participants watched sequences of videos, and, after viewing each clip, completed a reporting task. The first group freely reported their emotional responses to each of 30 video clips.

“Their responses reflected a rich and nuanced array of emotional states, ranging from nostalgia to feeling ‘grossed out,’” Cowen said.

Here, the experimenters found that participants converged on similar responses, with more than half of the viewers reporting the same category of emotion for each video.

The final cohort rated their emotional responses on a scale of 1 to 9 to each of a dozen videos based on such dichotomies as positive versus negative, excitement versus calmness, and dominance versus submissiveness. Researchers were able to predict how participants would score the videos based on how previous participants had assessed the emotions the videos elicited.

Overall, the results showed that study participants generally shared the same or similar emotional responses to each of the videos, providing a wealth of data that allowed researchers to identify 27 distinct categories of emotion.

Through statistical modeling and visualization techniques, the researchers organized the emotional responses to each video into a semantic atlas of human emotions. On the map, each of the 27 distinct categories of emotion corresponds to a particular color.

“We sought to shed light on the full palette of emotions that color our inner world,” Cowen said.