When most people think of college, they might imagine a bunch of single young adults living wild and free—and possibly going to class from time to time. But this is far from the reality. The average age of a college student is around 26, and many students already have families of their own. 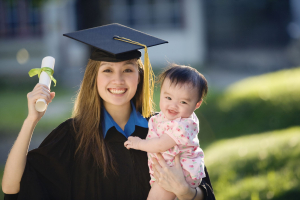 While colleges typically focus on helping students prepare for a career, one university wants to make sure that students with children are prepared for their role as parents.

University Village, family student housing at the University of California, Berkeley, is supporting its student-parents by providing parenting and character development skill building. But it’s not just about helping residents to be better parents. “We want to normalize the challenges with parenting while providing positive parenting tips and fun activities to increase parent-child relationships,” says Zenaida Hernandez, a licensed social worker who runs the program at University Village, which is one of the Greater Good Science Center’s 16 parenting initiative grantees.

By building community and sharing knowledge, their program helps student-parents feel validated, gain parenting skills, and have more positive interactions with their children. With 3.8 million college students in the U.S. who have children, University Village hopes the program serves as a model of how universities can support students navigating two important life experiences at the same time.

Meeting parents where they’re at

For example, one of the strengths parents learned about was forgiveness. They learned about the benefits of forgiving others and talked about their own experiences with forgiving their parents as children. Most participants could not remember times when their own parents had admitted their mistakes, including Dominique Dhainaut Medina.

“I’ve been learning about respectful parenting since my first was born, mainly because I didn’t want to repeat the same patterns I (and many of us) grew up normalizing, such as punishing and shaming,” says Medina.

Participants were challenged to find appropriate moments to admit their mistakes to their children and ask for forgiveness, modeling that it was OK to make mistakes and important to take responsibility for them. At the same time, children were learning to forgive and accept others who might say or do something that they didn’t like.

“This self-learning path allowed me to show up as a more regulated parent, which was my main goal,” says Medina. Other strengths they practiced at the parent cafés included gratitude, compassion, love, honesty, and self-regulation.

“Our program creates a space for parents to meet other parents and learn tips and strategies that help them be the parents they are striving to be,” says Hernandez.

A parent may start by attending parenting classes based on Triple P, an eight-week research-based curriculum offered to University Village residents and other UC Berkeley parents. That course provides a foundation by giving parents the skills they need to raise thriving children and build stronger family relationships. From there, they are invited to attend the on-campus activities, such as the cafés and play dates. Finally, they might apply to become a parent ambassador, where they could then teach and support the parents living at University Village. This community offers social support to participants, which is important because parents with a strong social network tend to have better relationships with their children.

At the start of the COVID-19 pandemic, the cafés and play dates had to shut down. But University Village already had a social media presence, where ambassadors would engage and post parenting tips. During COVID-19, the program has fully shifted online via Facebook and Instagram. This has sustained engagement and allowed the program to stay connected with parents who have moved out of University Village, which Hernandez stresses is a priority in the future.

University Village has also realized that it can create a more inclusive community and engage diverse voices by having spouses and even students who are not parents serve as ambassadors. After all, the character strengths that are targeted by the program can help moms, dads, and children alike.

With all these offerings, the program helps boost parents’ confidence and provide them an opportunity to do the same for other parents. According to Melinda Bier, a University of Missouri–St. Louis researcher who served as scientific advisor for this program, being ambassadors gave parents a sense of purpose in this work.

“The participants gained confidence in their parenting skills but they also became very proactive in their ability to find, organize, and use research-based strategies for cultivating the virtues in themselves and in their community,” she says.

This is critical, because parental confidence has a significant impact on the health and development of children. Confident parents tend to see themselves as effective in their role, and they more often engage in positive parenting practices, such as consistently and unconditionally responding to a child’s needs. This confidence is what seems to sustain parents throughout the ups and downs of raising children. This was clear for Medina during her experience with the program.

“Sharing with others the challenges we face as parents and normalizing our experiences has given me more confidence in my role as a mother, while reinforcing my belief that a different way of interacting with children is possible,” she says.

While the program was still offering in-person services, a vast majority of its ambassadors—over 96%—reported feeling that their parenting concerns were normalized and validated. Beyond that, both ambassadors and café participants reported significant increases in knowledge about character development and positive parenting.

And it is clear from the experiences of some of the parents that this knowledge is being converted into action.

One parent shared that she and her four-year-old daughter often experienced stressful mornings getting out the door for school, which led to sullen and silent car rides. Armed with ideas for promoting loving relationships, this parent started sharing three things she loved about her daughter as soon as they would get in the car. Over time, they both noticed how much easier the mornings had become, and her daughter even voluntarily began to share three things she loved about her mother.

And they still engage in this practice—two years later!

That is what this program hopes to do: create sustained positive parenting by focusing on character strengths. While evaluations of the program have not looked at long-term behavior change, the increases in confidence experienced by ambassadors and café participants suggest that these parents now have tools that they can continue to use throughout their parenting journey.

And while this program focuses on the skills and confidence of the parents, it is clearly translating to the children, as well. “We, as parents, are their first teachers, and so if we can model these behaviors within our own environments—not just be with our children but with our partners, with our friends, with our family members—this is something we can transmit,” says Hernandez.

Why teach parenting on college campuses

Beyond the fact that there are more parents attending college than ever before, college campuses are a great environment to promote positive parenting practices. The community atmosphere of a campus provides opportunities for parents to learn with and from fellow parents.

Another perk of housing a program like this on a college campus is that, as students, these parents are often eager to learn. “Because we are in an academic setting, many of our parents really care about the science and the research,” says Hernandez. They have learned that their best parent ambassadors are the ones who are motivated and excited to learn, as this seems to rub off on other parents that they work with.

While the University Village program will likely continue to make adjustments as the United States emerges from the COVID pandemic, they see their initial work—and the positive impact on parents—as an encouraging model.

Hernandez hopes to expand the work at University Village by creating more peer-led workshops and creating a parenting program for teens. And she hopes this work can spread beyond UC Berkeley. She says, “It would be incredible if other campuses with families were inspired by our program and implement something similar on their campuses.”