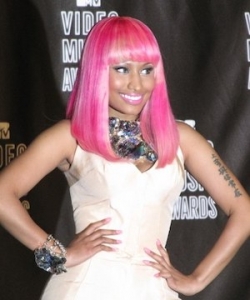 Rapper Nicki Minaj's father was "a violent drug addict who once set their house on fire while her mother was inside," according to Rolling Stone magazine. In 2016, Minaj was included on the annual Time 100 list of the most influential people in the world. © Creative Commons

Whether their success was in spite of, or because of, their psychological wounds is an open question. But new research reports artists who had particularly difficult childhoods are more likely to fully immerse themselves in the creative process—a practice that can lead to artistic breakthroughs.

A study of 234 performing-arts professionals found those who experienced intense childhood trauma—about 18 percent of the participants—reported higher levels of anxiety and internalized shame. But “they were also more fantasy prone, a factor that may enhance creativity,” write Paula Thomson and S.V. Jaque of of California State University–Northridge.

Additionally, for these artists, “the creative process was intensified and (highly) valued,” the researchers write in the journal Frontiers in Psychology. They “enjoyed the creative performance experience, which may indicate more creative resilience.”

The researchers analyzed data from a larger study that analyzed the effects of performance stress. They report their subjects—a mix of dancers, musicians, actors, directors, and designers—“were exposed to significantly more emotional abuse” than the non-artist participants.

They completed the standard Adverse Childhood Experiences questionnaire, in which they report whether they experienced one or more of 10 forms of abuse, including physical beatings, sexual abuse, malnutrition, or living with a parent who had a drinking or drug problem. Subjects were divided into those who experienced one, two, three, or four or more such issues.

All participants described their experience of the creative process, including their ability to get into a “flow state” in which they are fully engaged in their art. The researchers found significant differences between those who experience three or fewer forms of abuse, and those who suffered four or more.

Artists in the latter group “were more aware of a loss of a sense of self, a greater sense of contact with a force beyond themselves, greater emotional intensity that coexisted with emotional stability, a heightened awareness of technical and expressive abilities, and increased spiritual awareness during the creative process,” Thomson and Jaque report.

“This group also endorsed deeper states of absorption, including heightened awareness of a state of inspiration, and a state of discovery during the creative process,” they add. Importantly, they were also able to “freely move” between this immersive state and the more detached attitude needed to honestly assess their work.

Finally, these artists expressed “greater appreciation for the transformational quality of creativity—in particular, how the creative process enabled a deeper engagement with the self and world. They recognized that it operated as a powerful force in their life.”

Looking at the more practical elements of the creative process, the researchers found those with very traumatic childhoods held their own with their peers. They were fully able to “establish appropriate goal setting,” positively respond to feedback, and “fully concentrate on the task at hand.”

So a traumatic childhood clearly does not inhibit the creative process, and, in some ways, it seems to enhance it. Beethoven was reportedly beaten by his abusive, alcoholic father, and he was, by most accounts, not a happy man. But he channeled his inner pain into timeless art.

This story originally appeared as “For Artists, Traumatic Childhoods Can Lead to More Intense Creative Periods” on Pacific Standard, an editorial partner site. Subscribe to the magazine in print and follow Pacific Standard on Twitter to support journalism in the public interest.