Many people consider creativity the realm of the tortured soul. Think of Sylvia Plath, Kurt Cobain, or Vincent Van Gogh. Though there is no doubt that Plath, Cobain, and Van Gogh created works of great art, science suggests that they may be more the exception than the rule.

In fact, many studies have found that, while suffering mental illness can sometimes coincide with creating enduring art, creativity in general is more associated with positive emotion and well-being. For example, researchers have found that people report being happy and energized when they are engaged in everyday creative endeavors, and that being in a positive mood goes hand in hand with creative thinking. 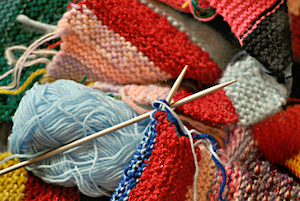 But while these studies and others suggest a link between positive emotion and everyday creativity, it’s still unclear which one causes the other (or if they exist in a kind of virtuous circle).

Tamlin Conner, a researcher at the University of Otago in New Zealand, and two American researchers analyzed surveys from over 650 young adults who had filled out daily online diaries for 13 days. Among other things, the questions asked how much time they’d spent in creative endeavors each day, and about their well-being: their levels of positive emotion, negative emotion, and what the researchers called “flourishing”—an overall sense of meaning, purpose, engagement, and social connection in their lives.

To tease out what causes what, the researchers compared measures of creativity on one day to measures of well-being on the next day, and vice versa.

Results showed that people who were engaged in more creative activities than usual on one day reported increased positive emotion and flourishing the next day, while negative emotions didn’t change. However, the reverse effect did not seem to occur: People who experienced higher positive emotions on day one weren’t more involved in creative activities on day two, suggesting that everyday creativity leads to more well-being rather than the other way around.

These results surprised Conner, who didn’t think the findings would be so definitive.

Still, she and her colleagues wondered why they got these results. Could it be that creative activity that we start on one day—let’s say, a crafting project—continues on the next day, and that’s why well-being goes up on day two? That would weaken the evidence that creativity has lasting effects on well-being.

Even after controlling for this possibility in their analyses, though, the researchers found that people who were more creative on one day still experienced more flourishing and positive emotions like energy, enthusiasm, and excitement the next day (though not other positive emotions, like cheerfulness). This led Conner to conclude that engaging in small daily acts of creativity may influence overall well-being rather than simply making us feel good in the moment.

But can everyone reap these benefits? Certain personality traits have been linked to creativity in the past, such as openness to experience. Yet, when Conner and her colleagues ran the analyses, they found that the benefits of engaging in creativity were similar across different personality types.

“We were actually pleased that personality made no difference in the link between creativity and well-being,” she said. “This suggests that everyone and anyone can benefit from introducing creativity into their daily lives.”

Of course, the study has limitations—most notably, that it relies on participants’ own reports of their experiences. We don’t really know how creative people actually were, at least not by any outward measure. However, it’s clear that when people think they’ve been creative, they experience more positive emotion and flourishing.

Conner believes her findings suggest that people should incorporate more creativity into their week—perhaps learn to knit, take up cooking, sing in a group, paint, or play music. She also suggests tapping into creativity at work, by trying to come up with novel solutions to problems or writing creatively.

“We can add creativity to the list of ‘actionable things’ people can do to take charge of their well-being,” she says.