The United States prides itself on being a beacon of innovation. 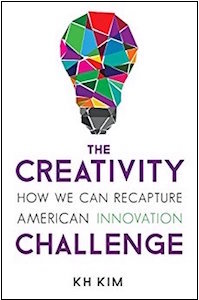 But there has been a substantial dive in the nation’s creativity in the last few decades, according to research by educational psychologist KH Kim, author of the new book The Creativity Challenge. Kim has tested more than 270,000 people, from kindergartners to adults, looking at (among other things) their ability to come up with original ideas, think in a detailed and elaborative way, synthesize information, and be open-minded and curious—what she considers creativity. Her research has found that Americans’ creativity rose from 1966 to 1990, but began significantly declining after then.

And that’s a problem. “America has an increasingly limited number of individuals who are capable of finding and implementing solutions to problems the nation faces today,” she writes. “If this trend isn’t reversed soon, America will be unable to tackle the challenges of the future.”

According to Kim’s research, the cause of the creativity crisis is a “gradual, society-wide shift away from the values that were the foundation of the American Creativity.” In the 20th century, global immigration to America brought different perspectives that helped fuel the country’s creativity, she explains. In turn, the American educational system encouraged creativity with its emphasis on intellectual diversity, curiosity, risk taking, and non-conformity. However, economic realities caused a shift in these values: Starting in the 1980s, cultivating creativity didn’t seem like the path to a stable job, and schools shifted to focus on improving standardized test scores in order to get funding, Kim writes.

The Creativity Challenge addresses how to combat this disheartening trend. Her book is a challenge for all of us—particularly those in leadership positions—to create environments that encourage creativity and all of the benefits it brings.

Eight signs of a creative person

One way to foster creativity is for managers, educators, and parents to understand the kinds of behaviors and attitudes creative people exhibit, and to recognize and support them. In other words, we have to recognize what creativity looks like in the wild—in the people we manage, in our children and students, and even in ourselves. Kim’s book identifies more than twenty behaviors that are common among creative people, based on decades of research that she reviewed. Many of them, particularly the following, can sometimes be misinterpreted as rebelliousness and impracticality.

How to support creatives

The most challenging aspect of recognizing creativity is that it takes place behind the scenes: You may see someone daydreaming at work and not know whether they’re procrastinating or laying the groundwork for a creative insight. The process of creativity is somewhat invisible, even though its results are powerful.

With that in mind, Kim offers some suggestions for supporting creativity:

With these guidelines in mind, we can work to develop environments that are structured to foster creativity, which in turn will benefit organizations and help society confront today’s challenges with much-needed fresh ideas.

“Human beings have an unprecedented ability and potential to create, and many find that in the act of creating they fulfill their true purpose in life,” writes Kim.