Many scholars have argued that we humans are a morally flawed species, concerned only about ourselves. Without religious doctrine and strict ethical codes, we would have little reason for staving off our immoral, selfish behaviors and no compunction to act altruistically. 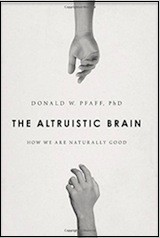 But according to Donalf Pfaff, a neuroscientist at Rockefeller University, this model of human social behavior is based on outmoded thinking and not supported by science. In his book The Altruistic Brain, Pfaff argues that findings from neuroscience and behavioral science point to a new model of altruism—one that sees altruism not as a response to moral authority, but as an instinct that is hard-wired into our brains.

In other words, we are “born to be good,” he argues: We have the brain circuitry that allows us to be sensitive to what other people are thinking and feeling, to empathize with their suffering, to care about their welfare, and to translate that information into compassionate action. Many of these neural mechanisms may fall below our conscious awareness; but they exist and drive our actions. That’s why we tend to develop rationalizations for why we act altruistically in a given situation—rationalizations that come after the fact, not before.

“The guiding principle of a healthy human brain is, ‘First act morally, then ask why,’” he writes.

Similar to arguments made by evolutionary biologists, Pfaff suggests that altruism is not the result of religion, but probably evolved to allow early humans to expand their niche and survive in a hostile world. He believes that the drive to have sex and the need to care for children is part of what propelled humans to decrease their fear of strangers and expand their circle of caring to include more and more people—something that altruism augments.

“Hormones and nerve cells that regulate the behaviors that are essentially social and that can be among the friendliest of behaviors—sex and parenting—provide the evolutionary and mechanistic background for prosociality,” he writes.

But Pfaff goes beyond evolutionary theory. By painstakingly reviewing the work of a wide range of researchers—Joshua Greene and Michael Tomasello, to name just a couple—he shows how helping others is generally our first response in human interactions, even though we may act differently given more time or thought. This leads him to suggest that we should “design strategies to elicit this capacity effectively, rather than to start from the assumption that it must be taught from scratch.”

In reviewing the research on priming, Pfaff suggests that people could be “primed” to act altruistically if they knew they had an instinctual capacity for doing so. He points to ways of structuring one’s environment to increase altruism in order to promotes trust, foster better relationships, and create a “virtuous cycle.” He even goes so far as to suggest that we could (and should) restructure regulatory bodies and the criminal justice system to inspire more altruistic and relational—rather than punitive and adversarial—ways of working together for fairness and justice.

“Because we know that moral reciprocity is humanity’s default position and we believe it is desirable, it would seem incumbent on us to work to develop institutions and cultures that foster moral reciprocity,” writes Pfaff.

Of course, altruistic tendencies are not universal, and there are cases where it falls apart altogether. Pfaff describes some of these cases—individual “bad actors,” gangs, and war, for example—and suggests ideas for how to use the concept of the altruistic brain to help avert them. Of course, much of this part of his book is speculative, and sometimes overly idealistic; but it does give one food for thought…and some hope, too. Perhaps, if we come to understand how caring for others is part of our natural instinct, we may be able to stave off some of our larger social problems and learn how to better resolve our conflicts.

According to Pfaff, our brains would definitely be on our side.