Imagine you have a thing for birds. Maybe you like hearing them outside your window, or watching them take flight when a child runs after an unsuspecting flock in the park. Maybe you even count yourself a birder.

Now consider this: If you learned that climate change was a danger to your fine-feathered friends, would you be more interested in reducing your carbon footprint than you are now? 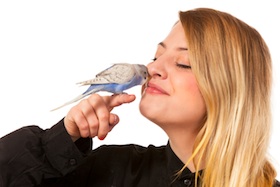 One might think that presenting climate change as a threat to humans would be more likely to move people to action than framing it as a threat to birds. But a recent study published in The Journal of Environmental Education finds that’s not true.

In fact, the study suggests that people appear more willing to take action if the perceived threat involves some kind of beloved creature other than them. And the reason is that, at least when it comes to climate change, people seem more motivated by empathy for non-human others than their own self-interest.

“Our findings show that having people think about danger to other organisms provides a window in for us to talk about the actual implications of climate change and other problems in a way that builds resilience rather than denial,” says lead author Janis L. Dickinson, a professor of natural resources at Cornell University. “One possible reason for this is that it taps into our basic tendency toward compassion.”

It is a novel finding that is relevant to educators, communicators, advocates, and anyone who cares about climate change.

The Dickinson team surveyed 3,546 people (largely bird watchers) to evaluate how their interest in engaging in climate-friendly actions might be affected by how the climate problem is described. Specifically, respondents were presented with these four statements and, after each, asked about their willingness to lessen their carbon footprint:

As expected, the findings revealed that the positive framing of the climate problem (numbers 3 and 4) increased people’s willingness to take action. Numerous earlier studies have shown that positive messages—such as those that emphasize the collective impact of carbon-cutting measures—are generally more effective than fear-based messages.

But responses to the two fear-based messages (numbers 1 and 2) revealed some surprises: Invoking a threat to humans led to no significant impact on the respondents’ willingness to reduce their carbon footprint—while invoking a threat to birds led to the most significant change of all. This result actually echoes at least one previous study, which found seeing birds or trees harmed by human activity provoked a stronger empathic response.

The authors suggest that focusing climate discussions on the risk to humans can cause people to unconsciously think about death, which activates defense mechanisms, such as denial, repression, and projection of the eventuality far into the future. In short, the prevalent messages that invoke a threat to humans—in the hopes of inspiring climate-friendly behaviors—appear to be at odds with how our psyches work.

On the other hand, describing a threat to other kinds of creatures people care about—while also reminding them of the impact of collective action—can elicit empathy, compassion, a sense of potential loss, and a desire to protect.

Dickson says the findings do point to a potentially important lesson for educators and communicators: Combining a sense of empowerment (by reminding people of our collective impact) with compassion (for non-human others) can help cultivate the psychological resilience needed to overcome denial and inaction.

And this, the authors say, suggest that studies of compassion “should become part of the dialogue and the research agenda among scientist seeking to understand how to help people confront and act upon climate change and other dire environmental problems.”