What can wasps and water striders tell us about urban renewal? A lot, according to David Sloan Wilson, an evolutionary biologist at SUNY Binghamton. You just need to understand the parallels between the evolution of their social systems and those of humans.

Wasps evolved to work cooperatively, with some members of the hive even forgoing reproduction in order to feed and protect the rest of the group. Water striders, on the other hand, are lone profiteers in the natural world, hunting by themselves and reproducing through sexual conquest. 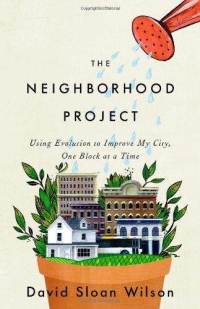 In his new book, The Neighborhood Project, Wilson argues that humans have similar options: to become selfish loners or work together altruistically. He reasons that these traits develop in humans much the same way as in insects—in response to environmental pressures.

Wilson is the head of EvoS, a cross-disciplinary academic consortium at SUNY Binghamton dedicated to both teaching evolutionary theory and applying it to social as well as biological questions. Through a project he developed in his city, called “The Neighborhood Project,” he has tried to use EvoS’ work to improve Binghamton’s troubled neighborhoods—in particular, to improve its social climate, or “niceness.”

“If we can understand the environmental circumstances favoring niceness,” writes Wilson, “we can attempt to expand the niche for niceness and shrink the niche for nastiness.”

So far, he and his team of graduate students have done extensive mapping of Binghamton, exploring which Binghamton neighborhoods contain the most kind, helpful—or “pro-social”—behavior. To gauge niceness, they’ve used some creative measurements, such as the density of Halloween decorations in a neighborhood and the frequency with which residents picked up and delivered pieces of mail that Wilson’s team purposely dropped on the ground. They’ve also tested kids’ levels of pro-sociality using an instrument called the Developmental Assets Profile, which asks them to respond to statements like “I think it’s important to help people.”

When results from these tests were mapped onto the city of Binghamton, the team found that there was a strong correlation between a neighborhood’s “niceness” and the pro-sociality of the children living there, giving support to Wilson’s theory that environments influence individual characteristics.

However, while these and other studies by Wilson’s team have produced provocative findings—for example, that income level is not necessarily related to pro-sociality—it is far from clear whether evolutionary theory explains this connection any better than sociology or psychology might. Indeed, Wilson has many critics who charge that evolutionary theory does little to suggest exactly how we should tackle complex social issues.

Wilson recognizes that his work is subject to such criticism, but he dismisses these charges as the products of academic turf wars. Still, he spends a large part of the book offering detailed stories of how he’s converted others to his point of view—from researchers to graduate students to community activists—suggesting he’s more concerned by these criticisms than he lets on.

Unfortunately, a relatively small percentage of the book’s 400-plus pages chronicles the Binghamton Neighborhood Project, perhaps because the project is still in its infancy and its results, so far, are minimal. Wilson and his team have not yet found a reliable way to apply their knowledge toward improving Binghamton’s neighborhoods, despite trying to encourage cooperation through community garden projects and a design competition for the best neighborhood park.

Research often moves at a glacial pace, so perhaps Wilson can be forgiven for not having more to report. After all, wasps and striders took millions of years to develop their social orders. Wilson and his team may just need a little more time to affect the evolution of Binghamton.