Like many biracial Americans of my generation, my parents met in the tumultuous cultural revolution of the 1960s. They married when it was illegal for people of different races to do so, and continued to challenge entrenched assumptions about race by having me. It was dangerous work. The Klan threatened our interracial family in Mississippi often. My father’s Jewish mother disowned him for marrying a black woman.

Thirty-something years later, my copper-colored self has navigated bar mitzvahs, barbeques, inner city public schools, the Ivy League, and a host of other wildly divergent worlds. I’ve been romantic and platonic with mono- and multiracial people in half a dozen American cities. And because of the memoir I wrote in my late twenties about being biracial, I’ve spoken intimately with multiracial individuals all over the world. 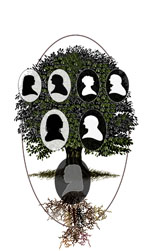 The pliability of racial and cultural identity can be a tremendous gift. In Kenya, Mexico, Thailand, Egypt, Morocco, and several countries in between, I am embraced as a daughter, sister, mother, or potential wife. Rarely, if ever, am I perceived as a foreigner. “Ah,” the shopkeeper, teacher, or taxi driver will say, “You come from America? But you are like us!” I laugh and shake my head. “No matter,” the person will say, “now you are home.” And I will feel at home, too. Even if I cannot speak the language, I easily absorb the mannerisms and rhythm of daily life.

Multiracial friends share similar experiences. Within hours, even minutes, of being immersed in another culture, our “own” ethnicity seems to disappear. A Swedish-Nigerian woman I spoke to recently told me her biracial identity made her a border crosser and, as she put it, a “walking heart.”

The not so fabulous part of being multiracial is the tremendous anxiety often felt as a result of belonging to several racial and cultural groups, each demanding almost lockstep allegiance. Should hair be straightened or twisted into dreadlocks? What slang is to be used, literary legacy privileged, political candidate supported? A decision as simple as which neighborhood to live in can be a minefield for a multiracial person pressured to embrace one race or culture. 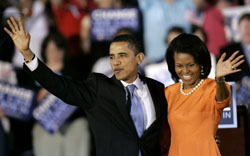 As the mixed raced population expands--and certainly as a biracial candidate for president gains popularity--feelings on alienation and invisibility seem to be declining, often replaced by unabashed pride. © AP Photo/Gerry Broome

In recent years, researchers have started to focus on the multiracial experience in all its complexity. Their work has documented the particular breeds of prejudice and anxiety we can face. But it also offers hope that as the next generation of multiracial families makes its way in the world, they’re developing new strategies to meet these challenges—strategies that the pioneers of previous generations never quite figured out.

Perhaps because I know the biracial predicament intimately, much of this research rings especially true for me. In one study, sociologist Kimberly Brackett and her colleagues found that multiracial people experience more racism than our monoracial counterparts. In another, Yoonsun Choi at the University of Chicago found multiracial youth at greater risk for substance abuse and violent behavior than monoracial youth of the same socioeconomic backgrounds.

These findings reflect my own experience precisely. Always too black or too white, I was privy to the prejudices of both racial groups, and I was used as a screen onto which each projected their idea of the Other. Though I had to countermand white racism, I endured slights from African Americans as well. My mannerisms were labeled snobby and standoffish. Even today within African-American academic and intellectual circles my credentials are often in question. The “privilege” of being half-white is perceived as a kind of “pass,” a disqualifier of true intellectual merit.

When I was a teenager, I used drugs to bridge the gaps between communities and to numb the pain of their judgment. Marijuana and ecstasy were great equalizers, a common language allowing for a temporary suspension of superficial differences. As a woman, I also found solace through sexual activity in which my skin color meant less than my viability as a sexual partner.

I know that many biracial and multiracial men use physical aggression and other forms of self-destructive behavior to prove their worth, a pattern that transcends racial categories. Several of the multiracial men I knew in high school, especially those from lower socioeconomic backgrounds, are now in prison. Another is dead.

But there is promising news from the multiracial front. In the last few years, biracial and multiracial people have begun to tell me in no uncertain terms about their growing ease with their dual or triple heritages. Though the number of Americans of “two or more races” is still below five million, according to the U.S. Census Bureau’s Population Estimate Program, this population grew by 25 percent from 2000 to 2007; the total U.S. population grew by just seven percent over the same period. As the mixed race population expands—and certainly as a biracial candidate for president gains popularity—feelings of alienation and invisibility seem to be declining, often replaced by unabashed pride. I’ve been especially taken with the number of multiracial groups on college campuses. I struggled mightily to forge cross-cultural allegiances at Yale during my undergraduate years. Fifteen years later, I find cohesive student groups of biracial and multiracial people on every campus I am fortunate enough to visit.

In addition to external supports, it appears parents are slowly gaining the facility to discuss these issues at home. A study by psychologist Barbra Fletcher Stephens has found that biracial couples are starting to acknowledge the importance of talking to their children about their biracial identity, and of “passing on the positive as well as the negative attitudes of both sides of their family in support of helping their children to develop a cohesive personal identity.”

In other words, it is important for parents to disclose both the pretty and not-so-pretty aspects of their cultural histories, rather than censoring or minimizing less appealing aspects. Fletcher’s study concludes that biracial and multiracial children with parents who present this kind of complex view of their family culture have less core identity conflict, and are thus better equipped to manage social environments still mired in prejudice and divisiveness.

As pioneers, the parents of my biracial and multiracial peers had few real studies, and even less popular discourse, on the subject from which to draw. As a result, they often discounted, minimized, or were completely unaware of their children’s struggles with identity and prejudice. This new research brings good news—and proven problem- solving techniques—to this next generation of parents, who then have a better chance of identifying and avoiding the potential pitfalls awaiting their children. Growing familiarity with the topic also provides validation and visibility to biracial and multiracial children who may not yet be ready to speak about the prejudice they face in the classroom and on the playground. This is exceptionally good news for these children.

A detailed study of biracial families nationwide, published last year in the American Journal of Sociology, offers further evidence of the progress multiracial families are making, while also pointing to the challenges they still confront. Sociologists Simon Cheng and Brian Powell determined that parents in biracial families usually allocate more financial and cultural resources, such as music lessons and museum trips, to their children’s education than do parents in corresponding monoracial families. However, the researchers also conclude that deeply entrenched social prejudices against interracial marriage, especially marriages between black men and white women, may leave these families socially isolated. Cheng and Powell surmise that, though these biracial families do not necessarily have more money, they might invest more resources in their children’s education in an effort to compensate for their marginalized social position.

This study highlights a tension—between the evolving attitudes of multiracial families and individuals, and the prejudices that still persist in society at large—that I also recognized in an older study, one that struck me as particularly relevant for the future of biracial identity. In the early ‘90s, Stanford University psychologist Teresa LaFramboise and colleagues explored several approaches people take to resolve the psychological dissonance of their multicultural experience. These approaches range from assimilation, where people try to blend in completely with the culture they see as most desirable, to fusion, where they try to merge different cultures to form a new one. But the researchers saw special promise in what’s called the “alternation” model, in which a biracial or bicultural person is able to fully function within two cultures without losing his or her identity, or having to choose one culture over the other.

I can see the allure of this model—the biracial person as masterful toggler, able to switch back and forth at the speed of light and remain unscathed by the transition. It’s a model I employ successfully at times and find inspiring to observe in others. I spoke recently at an arts festival in Amsterdam, for example, and found myself in deep discussion with my Dutch-Surinamese counterparts. When I stumbled over appropriate terminology, they emphatically shared what they’ve come to. “Double Blood,” they told me. “That’s what we are. Neither one nor the other, neither better nor worse. We are both, we are proud, and we are beautiful.” I was literally almost knocked over by the sheer force of their self-certainty, and adopted the term immediately.

I am still concerned, though, that even this most reasonable of solutions places the burden of psychological transformation on biracial people themselves rather than on the society at large. Biracial and multiracial people are expected to find a way to mediate a world seen as inherently and irreversibly divided. They must learn to walk skillfully between worlds deemed multiple, rather than peaceably through a world they experience as one.

This may serve as a useful coping strategy, but it isn’t a sustainable long-term plan for ending prejudice in our society. That will come only once all human beings reckon with the good and bad of their ancestral legacy and work to transform the rhetoric of separate and unequal into one of united and open to all.

Luckily, through this new research on biracial and multiracial families, we are that much closer to a road map for making this cultural shift. It will require that all parents talk to their children about their cultural legacy—both positive and appalling. Only once they’re so informed, can children begin to reconcile age-old racial conflicts, including conflicts in their own identity.

Moving in this way, we teach our children that the past is known, but the future is free, unwritten, and dependent upon them. This idea alone can shape a generation, and make prejudice a thing of the past.

I have to admit, i’m glad i am of one monorace not mixed.  im not a big fan of interracial dating/marriage either. i’ve met mixed race persons of all races and the problems and the downfalls of being mixed is the mixed person always trying to fit in his/her other half race than embracing both or more of their race. also i have known people who were biracial and they told me that their parents, either the mother or the father expressed regret and racist behavior towards their own biracial kids.  not all parents do this but some do.  it’s pretty sad and pathetic when you think about it.