From the time Senator Barack Obama first floated the idea that he’d run for president, pundits have speculated about how Americans’ racial prejudices would impact his chances for election.

But there’s been less talk about how his candidacy might impact Americans’ prejudices. Could Obama’s political success and prominence significantly change racial dynamics in the United States? 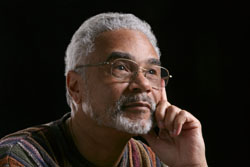 Public opinion seems divided. An ABC News/Washington Post poll in June found that four in 10 Americans believe Obama’s candidacy will help race relations, but roughly the same number believe it won’t make much of a difference.

Given the deep historical roots of racism in the U.S., it seems difficult to address this question without considering the country’s complicated history of race relations.

Few people know this history better than Clayborne Carson. Carson, a professor of history at Stanford University, has spent the last four decades researching and writing about the African-American civil rights movement, establishing himself as perhaps the leading scholar on the life and legacy of the Rev. Dr. Martin Luther King, Jr. In 1985, Coretta Scott King entrusted Carson with the job of editing and publishing King’s speeches, sermons, writings, and private letters. So far, the King Papers Project has produced six volumes of The Papers of Martin Luther King, Jr., with eight more volumes projected to follow. Carson has also drawn on the papers to publish The Autobiography of Martin Luther King, Jr., a compilation of King’s autobiographical writings.

In his work on the King Papers Project, as the founding director of the Martin Luther King, Jr., Research and Education Institute at Stanford, and in his own writing, Carson has highlighted the lasting relevance and impact of the movements King led and inspired. But he has also tried to call attention to the racial prejudices, inequalities, and injustices that have plagued American society for generations.

He recently spoke with Greater Good from his office at the King Institute.

* * *
Greater Good: What do you think Barack Obama’s presidential campaign has revealed so far about the current state of racial prejudice in the United States?

Clayborne Carson: I think it’s difficult to assess at the moment. But in general you could say that Americans have become more receptive to the notion of black political leadership. That’s been a very gradual process. It is certainly the case that at the state level, we’ve had examples of black senators in predominantly white states, or black governors in predominantly white states. And I think the gradual increase in the number of black presidential appointments has also had the effect of changing attitudes. Having two consecutive African-American secretaries of state—that says something, considering that is an office that was once held by Thomas Jefferson, who was a slave holder. That’s an indication of positive change.

But as a historian, I’m always aware that our ability to understand past systems of oppression is far better than our ability to recognize oppression in the present and especially to predict it in the future. We tend to see a system like slavery, and the intense racism that was associated with it, and understand that we’ve moved beyond that. And yet the descendants of slaves are still at the bottom of the economic order. We still have a tremendous incarceration rate for African Americans.

On the day after inauguration, there still will be racial ghettos in the United States, whoever wins the presidency. It’s going to take more than one election to bring about fundamental change.

GG: But what about when we consider everyday race relations in the U.S., especially when it comes to prejudice toward African Americans? Do you think Obama’s election as president, or even just his candidacy, will have a real impact on racial attitudes in this country?

CC: Well, if he were elected, I think that I could see a long-term impact of that on racial attitudes.

GG: What would that impact be? How would it manifest in American society?

CC: I think a large part of it depends on whether or not a President Obama would choose to take actions that address some of the causes of racial conflict. Will part of his agenda be to address the problem of continued widespread racial segregation in our society? Why are schools increasingly segregated by race 50 years after the Brown [v. Board of Education] decision? I don’t know whether he would risk his status as a post-racial leader by drawing attention to the fact that we still have a very racially divided society.

GG: How might this potential impact on racial attitudes compare to shifts we saw after the civil rights movement?

CC: Well, I think you’re talking about quite a different thing when you compare the election of a president to the passage of civil rights legislation. Civil rights legislation led to everyday changes of racial behavior. Black people could enter a hotel or restaurant and be accepted, or at least not be thrown out. That kind of change is part of the day-to-day interactions that people have. So today, a black person going into most restaurants is not going to cause an enormous negative reaction among white people, because they’ve seen this happen in their daily lives.

Having a black person in the presidency is probably not in itself going to be any different from knowing that Oprah Winfrey exists. Yes, white people know that Oprah Winfrey is very wealthy, and there’s a certain amount of respect that goes with that. I think that having a black person as president is more of that nature. It has a symbolic importance because now there’s one more area of society that is no longer all white. The presidency is a very important symbol, but it’s still a symbol.

CC: I think that the worst aspect of racial oppression is the psychological impact that it has on the oppressed—the way that notions of inferiority become instilled in the minds of the people who are in a subordinate position, so that they don’t maximize their own potential. You see that in our school system. You see people basically dropping out mentally even before they drop out physically.

I would hope that a President Obama would use what is referred to as the bully pulpit, use his status as a role model, and, as probably the most influential person in the country, encourage a shift in attitudes. And one thing I would really like Obama to do, for example, is to announce that he would give the graduation address to the high school in the country that has shown the greatest increase in the tested performance of its students. I could imagine schools competing for that, trying to get the reward of the attention that would come from a presidential visit. I think some kind of symbolic action like that would have an enormous impact on the psychology of young people, especially young black and Latino students.

GG: Can we look to any historical precedent to help us understand how Americans’ attitudes toward race might be shaped, and are being shaped, by this campaign? Or is this campaign truly unique, making it hard to assess the psychological impact it is having on whites and African Americans alike?

CC: Well, to say that the election would have great symbolic importance does understate it, because there’s no other symbol like the presidency. But I can think of lots of historical examples where African Americans have come together and seen a member of their race succeed, going back to Joe Louis in the 1930s, or Jackie Robinson in the 1940s, or Martin Luther King succeeding in Montgomery. All of these things had real significance at the local level, and then because of the media, they had hugely important national and even international significance as symbols of changing racial relations. And that’s where I see Obama—that he is just taking this to a new level. I think that his election would obviously be the most important symbolic event for African Americans, ever.
And actually I would extend that to many people around the world. I’ve traveled a lot and get requests for interviews from papers in Brazil and Europe and Africa. I’ve been to China and seen how much interest there is in the Obama campaign there.

GG: Why do you think that is?

CC: I think that people around the world are looking to America. We are the most powerful nation in the world, and I think they also want us to be the wisest nation in the world and the most understanding, the most culturally sensitive nation. And that’s where we’ve fallen short. I think particularly during the Bush years, we’ve seen a notion of America as being this culturally insensitive, arrogant superpower that doesn’t understand the rest of the world and doesn’t really care to understand the rest of the world.

So I think having a President Obama would send a signal that things might change—that this nation might exhibit a degree of cultural understanding and a humility that befits our great power.