Given the extent to which fear and resentment of other races is driving our politics, it’s an excellent time to revisit a key question: Are such attitudes inherent, or learned? A 2017 study from China suggested the former, finding infants as young as nine months show preferences for people with skin tones that resemble their own.

A new, much larger study offers more hope for humanity. It reports that American five- and six-year-olds largely reject the belief that an individual’s personality and abilities are determined by one’s skin color. 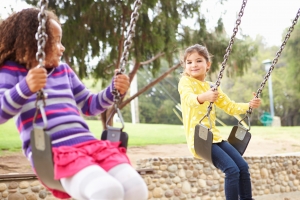 The results suggest such beliefs—which are potential precursors to prejudice—“are the product of protracted developmental processes, and require ample cultural input,” writes a research team led by Tara Mandalaywala of New York University. In other words, bigotry is an acquired attitude.

The study, in the journal Child Development, featured 203 five- and six-year-olds who were recruited and tested at the Children’s Museum of Manhattan. Their responses were compared to those of 430 adults recruited online.

“Participants were told two stories in which a baby was born to one mother (shown in an image), but adopted and raised by another,” the researchers write. “In one story, the birth mother and adoptive mother were the same race, and in the other, they were of different races.”

They were then told the child is now six years old, and he or she is “very nice,” “very smart,” “good at music,” and “good at sports.” For each of those descriptions, they indicated “whether the trait was due to the birth mother, or the adoptive mother.”

In those scenarios where the child’s race differed from that of the adoptive mother, children indicated the birth mother “only 31 percent of the time,” the researchers report. In other words, most kids did not tend to believe that the child’s personality and abilities were related to their skin color. Strikingly, “adults were more likely to view behavioral properties as heritable than children.”

Perhaps surprisingly, the corresponding attitude of their parents (66 of the kids’ mothers or fathers also took the test) was not related to the kids’ beliefs. The researchers note that previous studies have found this sort of mirroring of attitudes doesn’t begin until kids are a bit older—ages six to eight, according to one recent study.

The makeup of a child’s immediate environment, however, appeared to influence their views. Using home zip codes supplied by their parents, the researchers noted the demographic makeup of the neighborhoods of 97 of the young participants. They found both black and white kids were less likely to see certain abilities or attitudes as determined by race if they lived in a more racially diverse area.

Altogether, the results suggest “beliefs about race that contribute to prejudice take a long time to develop—when they do—and that their development depends to some extent on the neighborhoods in which the children grow up,” said coauthor Marjorie Rhodes, a New York University psychologist, in announcing the findings. Further study will determine whether racially diverse schools similarly shape young minds in a non-prejudicial direction.

So it appears we don’t come out of the womb predisposed to categorizing people by race. That encouraging news makes the task of determining how and when racism takes root in young minds that much more urgent.

This story originally appeared as “Tolerant Tykes: Small Children Aren’t Inherently Racist” on Pacific Standard, an editorial partner site. Subscribe to the magazine in print and follow Pacific Standard on Twitter to support journalism in the public interest.