Whatever side of the political spectrum you are on, it’s tough to be happy about the current state of politics in the US. Congress is stymied by discord and obstructionism; candidates for office bow to billionaires to get funding for their campaigns; mudslinging is a common practice in our political discourse. It’s hard to watch as our country spirals into hate-filled rhetoric and deep ideological divisions. 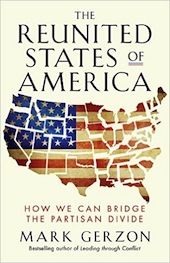 But while some might believe that the answer lies in their “side” winning the political fight, many others just feel hopeless that any outcome will change the dynamic. Faith in our government is at an all-time low, and the divide has become wider than ever, with more and more Americans opting out of the political process altogether. So what’s to be done to change that?

Mark Gerzon, an international mediator, provides some guidance in his new book, The Reunited States of America: How We Can Bridge the Partisan Divide. While admitting things are pretty dire at the moment, he outlines some of the steps we can take—as citizens and within organizations—to bridge our differences and find common ground for future governance.

Gerzon speaks from experience. He has been a mediator in Washington, DC, as well as in several international conflicts where polarizing dialogue and stalemates are the norm. Yet, he has found a way forward, by practicing a few, practical ideas of engagement, which he insists could help break the partisan divide.

One important step, he argues is reframing the goal of politics. Instead of citizens or politicians insisting that their side has all the answers, he promotes a mediator’s vision in which “Americans can work together with people different from ourselves to find common ground that can strengthen the country we all love.”

He argues that solutions to the stalemate come from learning how to listen to others with respect and genuine openness, rather than expecting people to give up their viewpoints and win them to your side. Bringing people face to face with each other, with civilized rules for engagement—like listening without interrupting, seeking to understand rather than debate, and entering with an open, rather than closed mind—all help to promote positive relationships, he writes, which can go a long way toward improving political outcomes.

“What voters want, and America needs, are leaders who will seek relationships with their adversaries rather than control over them,” writes Gerzon. “Since we are not going to have a one-party rule, we need politicians who will work together.”

Some of his suggestions may seem painful to consider at first—but he has good cause for making them. For example, he advises taking a break from hyper-partisan media sources and, instead, listening more to voices from the “other side” of the political aisle. He also suggests that people eschew name-calling and disrespectful communications in favor of listening and learning from those who think differently than you. Otherwise, we risk further alienation from each other.

“Between pluribus and unum is a lot of hard work. It involves opening our minds and our hearts to find common ground,” he argues.

His ideas could seem pie in the sky…until he highlights the many, many people inside and outside of Capitol Hill who are already making this happen. Readers might know of the partnership that progressive Van Jones and conservative Newt Gingrich created to reduce the number of nonviolent offenders in prison and to convince both political parties to work for prison reform. But it was refreshing to learn of other, lesser-known people and organizations, like the Convergence Center for Policy Resolution, the Village Square, and the Bridge Alliance, to name just a few, who are working to put people from all political stripes together in order to come up with novel solutions that bridge political divides.

According to Gerzon, the reason these organizations are gaining ground is that so many people—even politicians—are tired of worn out political rhetoric. They’ve come to see the importance of dialogue over debate in solving our complex problems.

“Healthy, honest debate is a first-rate tool for deciding between two options. But it is a lousy, ineffective tool for creating a better option,” he argues. “If two sides are debating second-rate proposals, the debate itself cannot generate a better one. Dialogue, however, is designed for precisely this purpose.”

For those readers who want to opt in and start working toward better “transpartisan” solutions, Gerzon recommends ways one can engage in the movement for political change. In addition to joining organizations he features in the book, he suggests taking a short “vacation” from your political identity and being more open to discovering different political viewpoints—perhaps joining one of a number of living room conversations happening around the country.

In addition, he suggests working to reform unfair political practices that create more division—for example, gerrymander voting districts or creating shadow organizations that allow the top 1 percent to discreetly fund political campaigns. When considering candidates for political office, he advises citizens to look for leaders who, if not independent, can at least lessen partisan divisions, because they demonstrate that they know how to listen to others, work with diverse partners, and treat adversaries with respect.

“There can be no genuine, productive search for common ground without a willingness to learn on the part of all of us,” he writes.

Of course, this may seem overly optimistic—can people really get outside of their party affiliations and not be overly influenced by media messages? Will they forego power in order to work toward the greater good? Perhaps not; but if we don’t try to move in that direction, we are surely bound to end up with more of the same.

“If both parties have failed our country, just working to make sure that our side wins is not enough,” writes Gerzon.

In many ways, Gerzon’s arguments mirror those of social scientists—and of the Greater Good Science Center—who’ve argued for the importance of empathy and respecting others’ viewpoints in order to find common ground, and who warn of the dangers of ignoring internal biases in decision-making. Time and time again, we find that when we choose connection, respect, and openness over power, disrespect, and control, great things can happen—even in politics, argues Gerzon.

“If all of us do our part, our chorus of commitment to our country will cut through the hyperpartisan static,” he writes.

And that, indeed, gives me hope for a more united America.