“Greed is out, empathy is in,” writes primatologist Frans de Waal in his recent book, The Age of Empathy. He may have a point: The Age of Empathy is one of several recent books to make a persuasive case for putting empathy at the center of ideas about human nature, education, and the future of the planet. Indeed, following the success of books like Mary Gordon’s Roots of Empathy, The Age of Empathy joins Jeremy Rifkin’s The Empathic Civilization as two significant recent releases that move discussions of empathy out of the laboratory and into major policy debates.

Though recent Wall Street and oil company shenanigans may suggest otherwise, de Waal, the C.H. Candler Professor of Psychology at Emory University and a Greater Good editorial board member, assures us that humans are by nature empathic—even when empathy does not serve our own individual interests. Not only are we predisposed to help one another from birth, but this innate desire makes evolutionary sense. “The ability to function in a group and build a support network is a crucial survival skill,” he writes. 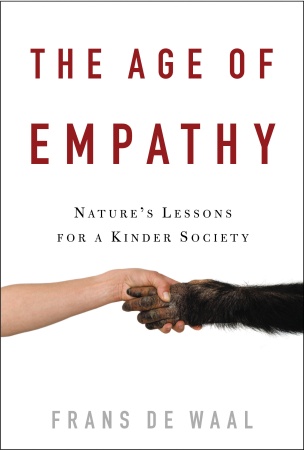 The Age of Empathy, by Frans de Waal

So perhaps it shouldn’t be surprising to learn how rampant empathic behavior and cooperation are across the animal kingdom. De Waal shares stories of pets who comfort their distressed owners, chimps who sacrifice themselves to try to save a drowning companion, and dolphins who rescue sailors in a capsized boat. These stories and others indicate that the roots of empathy, like many other emotions, are not limited to humans, and in fact go far back in the evolutionary chain. “Empathy is part of a heritage as ancient as the mammalian line,” writes de Waal. “Empathy engages brain areas that are more than a hundred million years old.”

De Waal doesn’t shy away from the political implications of these findings. Though many equate Charles Darwin’s evolutionary theory with a “survival of the fittest” philosophy, de Waal argues that this idea was born of the economic theorist Herbert Spencer, not Darwin. Spencer used Darwin’s theory of natural selection to support his view that a competition-based economy was best, even though Darwin himself wrote extensively on the benefits of cooperation among animals.

If we are born to care about the welfare of others and feel uncomfortable when others suffer, de Waal argues, doesn’t it make sense that we should support a welfare state? He points out that countries with high levels of mutual trust and support in the population tend to be the happiest countries on earth, and that even Adam Smith, the father of modern economic theory, warned against relying on greed as a motivator for social organizing.

De Waal bemoans political and economic institutions which ignore the fact that humans are empathic by nature. “Human we are, and humane as well, but the idea that the latter may be older than the former, that our kindness is part of a much larger picture, still has to catch on,” he writes.

And time is running out, according to Rifkin, the best-selling author who has served as an adviser to the European Union. Rifkin believes that we humans are in a race for survival, dependent on our ability to organize around an empathic approach to our planet. The problem, as he sees it, is that the very forces that bring us together as a global community and allow our empathic connections—from communications technologies to more efficient energy production—are the same ones responsible for polluting the earth. 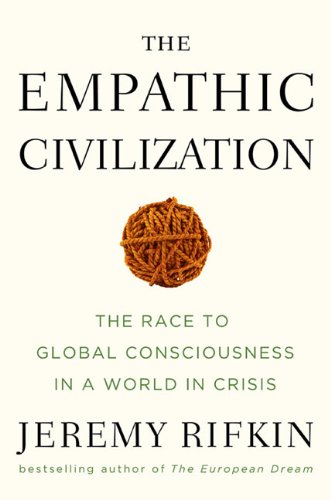 The Empathic Civilization, by Jeremy Rifkin

A large part of The Empathic Civilization is an anthropological history of empathy, provided in sometimes mind-numbing detail. He describes how as diverse communities come into greater contact with each other by moving from hunter-gatherer to agricultural-trading to industrial-technological cultures, they become more empathic toward strangers and create more open, democratic societies. Unfortunately, these same societies also tend to accumulate more wealth and use up more resources, producing higher levels of waste, which then spreads around the globe, concentrating in poorer communities and causing global warming. So while these societies may be more enlightened in some ways, they are more destructive in others. The race is on, he believes, to see what wins out: collective empathic action toward saving the earth or the desire for more technology and personal freedom.

Rifkin finds hope in the youth of today, who have been raised entirely in the age of the Internet. He argues that they are more empathic toward the environment, more supportive of immigration, favor a bigger government role in providing social services, and are generally more engaged with their local and global community. In addition, they seem more willing to eschew consumerism, a decision supported by recent research showing that more money and possessions do not lead to greater happiness. “Living in a society where the essentials for a comfortable life are met but where the gap in wealth and income between people is relatively narrow is likely to produce the happiest citizens,” he writes.

Rifkin writes of another encouraging research development, suggesting that empathy can be taught. He highlights programs building on this insight to cultivate empathy in the next generations. For instance, in Gordon’s Roots of Empathy program, profiled in Greater Good a few years back, children watch interactions between mothers and their babies, and learn first-hand how to care more compassionately for another.

In addition, some classrooms are shying away from a strict emphasis on competition between students, and social literacy—how to read the emotions of others and react appropriately—is being taught to children from a young age in many schools.

But are these efforts too little, too late? Rifkin believes we must increase social consciousness and create a more empathic social order in order to avoid the catastrophic effects of global warming. “A more distributed and collaborative global economy,” he writes, leads to a “greater differentiation of skills, a furthering of selfhood, greater connectivity, the extension of empathy and expansion of consciousness—this time to the biosphere envelope that cloaks the earth.”

Here Rifkin can find support in de Waal’s book, which shows how we humans can (and often do) extend empathy toward those who are not part of our own families or social groups, especially when circumstances are right—i.e., when our survival needs are met and we feel safe. If Rifkin and de Waal are correct, the next chapter of human history will be defined by our ability to nurture these empathic instincts and restructure our social, economic, and political systems in time to save the planet.

I hope that this book will stop humans from killing each other because of fighting for their principles, religion and greed of power

<a > Medical Transcription Jobs </a>

<a > Transcription School </a>

A great way to enjoy the benefits of cooperation is to play a cooperative board game. There’s no need to compete and play against one another when it’s family game night. Check out cooperative games and perhaps consider giving one as a gift. Teachers can use our games in the classroom too. We are a small business devoted to cooperative play (and to a more happy and harmonious world.) Thank you!