I’ve grown up hearing about climate change. It started with adults telling me the importance of protecting our environment—and by the time I was at Martin Luther King Jr. Middle School in Berkeley, California, I was getting full lessons on the direness of the situation. For myself and many other young people I have talked to, we experienced a creeping feeling of dread, as we slowly realized how bad the situation was and how little anybody was doing about it. 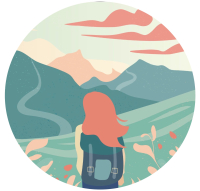 In the summer of 2020—after over a year of pandemic and remote learning at my high school—I realized just how screwed we were. After months of built-up stress, all it took was a single headline about climate change to send me spiraling down a hole of depression and anxiety. I don’t even remember what the headline said; but the uncertainty it triggered really got to me.

I kept reading. The more I learned, the more sickened and angered I felt by the lack of action. The media so often portray climate change as a massive problem where things continuously get worse and the world is hurtling toward annihilation. It left me feeling not just utterly hopeless but worse yet: helpless.

I started looking beyond the Internet for answers. I read books like The Future Earth, by Eric Holthaus, as well as Kim Stanley Robinson’s novel The Ministry for the Future. I talked to activists like my aunt Chelsea Chandler, who is director of climate solutions at Clean Wisconsin. And after many conversations with people both in and outside of the climate change movement, I began to realize how pointless it was to feel helpless.

“If you lose hope, somehow you lose the vitality that keeps moving, you lose that courage to be, that quality that helps you go on in spite of it all,” said Martin Luther King Jr. in a 1967 Christmas sermon. He was talking about the civil rights movement, but his words apply just as well to the movement against climate change.

“If you lose hope, somehow you lose the vitality that keeps moving, you lose that courage to be, that quality that helps you go on in spite of it all.”

Mainstream media’s focus on catastrophe can be very detrimental to the cause of climate activism. Even the most well-meaning journalists can oftentimes act as poison for the potential activist. This leads many to stop being able to envision a better future, instead spiraling into what the oil and gas industry wants: despair and undirected rage. A lot of activists say hope is the solution to despair—but hope alone will not solve climate change. We will need courage to do that, I believe.

The number of situations that have been solved with courage even after all hope was lost is staggering. In 1940, after most news outlets declared the Dunkirk evacuation an unmitigated disaster, thousands of people had the courage to get on tiny boats and cross the Nazi-infested English Channel. The Apollo 13 disaster is another example of courage overcoming a hopeless situation, when an explosion on board the spacecraft drove scientists to face an impossible situation and eventually overcome it. When hope falters, the only options left are courage or collapse.

Courage is not something you can spread as easily as hope, but once it is learned courage becomes a powerful force for good. Courage is not just picketing coal plants and protesting oil pipelines, it is also reading the bad news and seeing an opportunity for spreading awareness rather than despair. It is waking up every day knowing we walk on a changing earth and imagining what possibilities that entails, along with the problems that it will inevitably present. 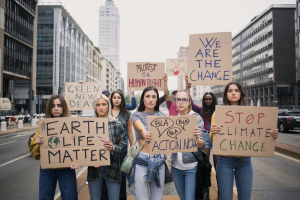 Hope and courage are at their absolute best when they work together, with hope being a moral imperative around which a movement can unite and courage being the will to persevere even through the toughest of situations. For the climate movement to be successful, we will need both at the forefront of the conversation. Here’s something else Dr. King said, back in 1965: ​​“If you can’t fly, then run. If you can’t run, then walk. If you can’t walk, then crawl; but whatever you do, you have to keep moving forward.”

For the sake of my own sanity, I began focusing on a local level, rather than agonizing about the national or even international one. Although climate change is an issue the whole world needs to deal with if we are to beat it, at this point in my life it feels fruitless to throw my time and faith into an impossibly large, Kafkaesque system. Even if I can’t save the world, I can at least make my neighborhood a better place.

At school I help in cleaning up our sorry excuse for a garden and restoring it to a place where all students can gather. I write about climate change for my school newspaper. On my weekends, I march and volunteer with community organizations. All these things help better the environment in my community—but more importantly, they cultivate solution-oriented thinking around climate change.

When I feel despair start creeping in, I take a moment to remind myself what we are trying to protect as well as give a moment of grief for what we have lost. These are natural emotions to experience when we are faced with existential change of any kind, and it is important for you to experience them and work through them in your own way. When the unyielding stakes and barrage of media despair become too much, I take a walk in the Berkeley Hills, go kayaking, or simply walk down my neighborhood streets, paying extra attention to the chirping of the birds and the inviting shade of an oak tree.

“When hope falters, the only options left are courage or collapse.”

“Courage faces fear and thereby masters it,” said Dr. King. “Cowardice represses fear and is thereby mastered by it.” To master fear as Dr. King describes, we need to do more than spread hope and positivity when talking about climate change. We also need to acknowledge the bravery, sacrifices, defeats, and successes that come with any movement for political change.

This essay was revised and expanded from a column in the Berkeley High School student newspaper, The Jacket. The author is the son of Greater Good’s editor.