The prospect of a dangerously warming planet inspires us to cling more tightly to our tribe. That is the discouraging finding of two newly published studies.

One reports that confronting people with climate-change warnings provoked higher levels of ethnocentrism among residents of a central European nation—and decreased their intentions of acting in Earth-friendly ways. The other finds the threat of global warming increases group conformity, leading people to more tightly endorse the truisms their circle subscribe to. 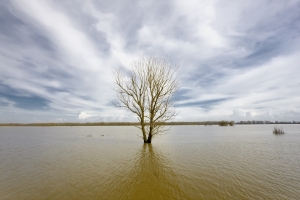 The results aren’t surprising, if you consider the long line of research that finds threat of any kind tends to foster this sort of solidarity. It’s just that this problem will require a globally coordinated response—not the insular, defensive crouch it apparently induces.

Both papers are published in the journal Group Processes and Intergroup Relations.

For the first paper, a team led by University of Salzburg psychologist Isabella Uhl compared the responses of people in an individualistic nation (Austria) with those in a more communal culture (Argentina).

Participants were presented with either threatening information about climate change, or non-threatening facts about planet Earth. The climate-change-related statements included facts about rising sea levels, floods, and the extinction of species.

Afterward, all noted “their willingness to engage in 12 pro-environmental behaviors in the coming year,” and expressed their level of agreement with six statements related to ethnocentrism, such as “I don’t think it is to our advantage to mix with people from other cultural or ethnic groups.”

In both nations—slightly in Argentina, significantly in Austria—those who were told about climate-related threats said they were less likely to adopt Earth-friendly behaviors than those who were not. This reflects the fact that the negative scenarios put them in a bad mood, which apparently made them less receptive to change.

What’s more, those exposed to the threat also expressed more ethnocentric views—a trend that was again only slight in Argentina, but significant in Austria. This, too, was likely the result of the negative frame of mind they were in, although the researchers note it could also reflect the impulse to scapegoat outsiders.

“Across cultures, people resolve climate-change threat in symbolic ways, rather than by trying to address the problem itself,” the researchers conclude.

In the second paper, a team led by University of Leipzig psychologist Markus Barth report that, in three studies, threatening news about climate change increased people’s conformity to the norms of their group. This was true for, among others, a radical leftist organization, which suggests this type of fear triggers not conservatism per se, but rather an impulse to close ranks with those we trust.

Close-minded conformity presents rather obvious problems, but the researchers write that it also could make it easier for a smart, responsible leader to get things accomplished.

“This emphasizes the responsibility of decision-makers and authority figures within a group,” they write. “Stressing values of tolerance or respect to be defining attributes of the group may motivate members to conform to these norms.”

Alternatively, if leaders “nurture fear and intolerance ... the threat of climate change will indeed breed social conflict,” they add.

Together, the findings point to powerful human impulses we would be wise to keep in mind. Incorporating the notion of group identity could produce interesting new ideas for inspiring pro-environmental behavior. For instance, the idea of collective action by our clan to save the environment could become popular if it makes our group seem heroic, thereby raising our status.

In the long term, convincing people to adopt a different collective identity—as citizens of the world—may be the most promising solution. But one thing is for certain: If we are to combat climate change, we’ll need to reframe the fight in ways that align with our intuitions.

This story originally appeared as “How the Threat of Climate Change Spurs Ethnocentrism” on Pacific Standard, an editorial partner site. Subscribe to the magazine in print and follow Pacific Standard on Twitter to support journalism in the public interest.