Michael Rossato-Bennett first met Dan Cohen about three years ago, when he was assigned to do a short video for a foundation supporting Cohen’s Music and Memory project. Cohen had begun a campaign to provide iPods to elderly nursing home residents in order to improve their quality of life, and the foundation wanted to document the effects of his program for their website.

On the first day of filming, Rossato-Bennett watched as an elderly African-American resident named Henry, who’d been bent over, withdrawn, and unable to communicate, came alive while listening to music. Henry began singing and answering questions about his life, talking of how music made him feel, his face animated with passion. Henry’s remarkable transformation so moved Rossato-Bennett that he decided to follow Cohen for three years to document his work more fully, resulting in a full-length film, Alive Inside.

Rossato-Bennett’s initial video of Henry has become a viral Internet sensation, reaching over 10 million viewers and sparking a much-needed conversation about how to care for the elderly. Alive Inside premiered at the Sundance Film Fesitval in 2014 and earned a coveted Audience Award.

Through the video and film, Cohen’s Music and Memory project has taken off—with programs in all 50 states, some Canadian provinces, and several other countries around the world—and has catalyzed new research into the benefits for people with dementia.

I spoke with Cohen and Rossato-Bennett about their work and the film.

Jill Suttie: How did you first get the idea to give iPods to elderly people?

Dan Cohen: My background is I’m a social worker and I have a career in technology companies. But in 2006 I heard a journalist on the radio talk about how iPods were ubiquitous, and I thought that, in all the nursing homes I’d been in, that wasn’t really an accurate statement. So, I googled “iPods” and “nursing homes” and found out there are 16,000 nursing homes in the country and not one that was using iPods with the residents. And I thought, gee, if I were in a nursing home, I’d like to have access to my favorite 60’s music. And, since I’d spent my whole life connecting organizations and technology, this seemed like the last frontier. It seemed like an opportunity to do something good.

JS: Were you surprised by the impact music had on the nursing home residents?

DC: I didn’t know at the beginning how deep an impact it would have. I only learned that. However, the fact that music holds power is really a bedrock belief. There’s a lot of research around this in the world of music therapists; it’s been known for decades. But it just hasn’t been able to scale, because it depends on somebody having to be with another person, one on one. So, the critical point was how do we take this and scale it? We know it can help people who are isolated and hurting because they’re sick, especially if they have Alzheimer’s disease. But it shouldn’t just be for those who have Alzheimer’s disease. People who are facing other challenges, people who are alone or depressed or whatever—this is going to help just about anybody.

Michael Rossato-Bennett: I’ve heard Dan talk a lot about this, that it’s not just for Alzheimer’s patients. But everyone was pleasantly surprised at the effect that music has for people with Alzheimer’s dementia. I think, for those people, music is literally a gift from God, if you will. There is no drug that has any efficacy for that population, and there is something in the wiring of our minds that allows music to be experienced at such a level of resolution that it’s almost insane. The entire emotional system is still alive in these people—not completely maybe, but to a great extent—and it just so happens that music is the conduit to your deepest memories, your feelings, your deepest aliveness. I can’t get over that.

JS: What connection did you find between listening to music and memory for the patients you encountered?

DC: When I started this, I didn’t have the dementia connection. I was coming in as a volunteer, so they didn’t put me right into the lock down unit for people with the most severe dementia. In terms of the connection with memory, I learned about it. One of the first things I did was to look into the research on music and memory. There’s a lot of research that has been documented and a lot of ongoing research, and there’s more to do. But, in terms of memory, some research by Connie Tomaino [co-founder with Oliver Sacks of the Institute for Music and Neurologic Function] showed that, when you give people with late stage dementia music that has personal meaning to them for an hour at a time, 3 days a week, after 10 months they’ll score 50 percent better on cognitive tests. So, talk about music and enhanced memory, or leveraging the plasticity of the brain—wow!

JS: Researchers say that music from our youth tends to have the most impact on our emotions and memory. Was that the case with your patients? 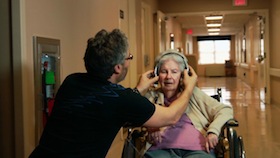 A scene from the film Alive Inside.

DC: The short answer is, yes. Neurologists will give different age ranges for this—10-20, 15-25, and, for some, single digits. But sometimes we need to think outside the box. One woman was in her 80’s, and there was nothing she seemed to like. But then in the next room, someone was playing the Eagles, and she really loved that. Why? Because that’s what her kids listened to at home. Still, generally, music from our youth most affects the same part of our brain impacted by our autobiographical memories.

MR-B: I don’t think it’s right to think of music as if it were a drug, as if it were about efficacy or getting the best bang for your buck. Music is part of our lives and our memories, and we all have more than one life. The music of our youth is very, very powerful, and especially for people with dementia—it’s incredibly evocative at awakening emotions. The way I’ve come to think of it is that it’s like we’re of two minds. There’s the cognitive mind, which sort of disappears in dementia, and then there’s the emotional system. And the emotional system is very much alive. I’ve been with people with dementia where their music was the door in, but once the door was opened, they were liking Rod Stewart and Susan Boyle, and they were making new memories, even deep into Alzheimers. And that’s one of the things we’re learning about—the plasticity of the brain.

JS: I understand the Music and Memory program is currently being studied at the University of Wisconsin. What are they looking at and what are the results, so far?

DC: There are two different research efforts: phase one, based on 100 nursing homes, and phase two, which is based on a grouping of 150 homes. Phase one is running for 18 months, and they don’t have a final report—it’s due in the summer or fall. They are studying a wide range of things, including data collected by the federal government and by graduate students sent to track and measure agitation levels in residents. The students put little accelerometers on patient wrists to track how people move while listening to their iPod touches, recording every song that plays and how long it plays to synchronize this with the agitation of the wrist. And what they learned from phase one is, gee, not only was music good for the individual, it was good for everyone. Six months into that study the Secretary of Health for the state said, “We’re not waiting for the final results. The results are clear, and we’re getting funding for 150 more nursing homes.” So, yes, we don’t have a final report; but the state already took action.

The state tracks anti-psychotic medication levels in nursing homes as measured by the Centers for Medicare and Medicaid Services, which puts out a ranked list, states 1-50, with 1 being Hawaii with the least anti-psychotics use and 50 being Texas, with the most anti-psychotics use. Before the iPods use, Wisconsin started off as number 10. In nine months, they jumped to number 3. Some will say music and memory isn’t the only factor; but it is the primary factor. So the state is very excited about that.

JS: I wonder if doing the film changed your thoughts about caring for your own loved ones when they get older?

MR-B: About halfway through making this film, my stepfather was dealing with dementia and got put in a nursing home. And it was very hard for my family. Here I am, at least somewhat of an expert on the subject, and I felt incredibly helpless, actually. The Alzheimer’s Association was really good at counseling our family and we brought our stepfather home. That was really wonderful; he died at home.

We’re so afraid of aging, we’re afraid of death, we’re literally afraid of facing our own mortality or the fact that we are part of the system that rises and falls, and that’s born, and grows, and dies. This idea that we can just put our elders away is not acceptable to me.

JS: I actually think people are more afraid of dementia than they are of dying.

MR-B: That’s rightfully so. You know, without your memory, who are you? It’s a very valid question. I’ve to had to deal with that, also—that trauma.

To me, nursing homes are very important; but there are many more people being cared for with dementia at home than there are in nursing homes. As the future unfolds, there are going to be more and more people aging in place. It’s the only way we can afford, as a society, to deal with this onslaught of numbers, the tsunami of dementia that’s about to hit us in 10 years. So, the ability to use music in your home to create a place of solace, of peace for the person with dementia and for the caregiver; it’s absolutely a godsend. We need to help people, to give them the tools to use this very simple idea, because caregiving is very hard. Caregivers live an average of 7 years less than the normal population. It’s incredibly stressful. I watched my mom deal with that. If music can help, it should definitely be used.

JS: What do you hope the film will accomplish?

MR-B: One thing I’m really interested in seeing is the connection of young and old. There’s too much separation of people from each other in our nation, too much separation because of aging. I’m really interested in getting this idea into middle schools, and I’ve created an app that’s almost ready to be released which will be used by kids to help their grandparents find their music. I’ve developed an educational kit, and we’re trying to get these kits to schools all over the world. That’s really what Alive Inside is trying to support, this connection between young and old through music.

DC: The goal for me is to have all of your readers thinking about themselves and their own family members. We want everyone to have their playlist, whether they’re healthy or not. If they’re not healthy, fine, we can give them iPods. But if they’re healthy, they should still have their playlists, so they can enjoy their music now. And, when they have heart issues or end up in the hospital or get into the health care system, that playlist is ready so they can take it into the system. It will change the course of their quality of life.