What common origin do schoolyard bullying, sexual harassment, and terrorism have in common?
They are all abuses of positions of power or authority, according to author Robert Fuller, and thus serve as perfect examples of “rankism.”

In his 2002 book Somebodies and Nobodies, Fuller first coined that term and floated the radical notion that rankism was an evil akin to racism and sexism. Indeed, Fuller went so far as to suggest that rankism was an underlying cause of those “isms,” as well as other forms of discrimination. 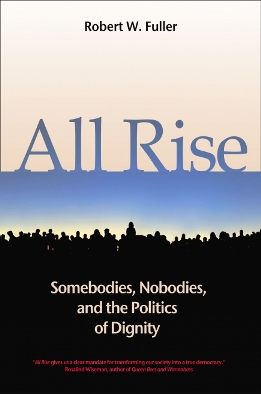 All Rise is the second book Fuller has written on rankism, and it further develops his vision for replacing a “rankist” world with a “dignitarian” one, in which dignity is recognized as a human right. Fuller himself writes from experience: He has been at various times a Somebody (as president of Oberlin College, a physics professor, and a citizen diplomat), as well as a Nobody with no professional affiliations. He draws on his experience not only to offer concrete examples of how rankism affects everyone’s lives—whether through a boss dressing down an employee, a teacher condescending to a student, or a diner berating a waitress—but also to propose ways we can overcome it.

Whereas Somebodies and Nobodies sometimes suffered from being too hypothetical, All Rise takes the fight against rankism to the streets: Fuller brings his ideas to life through real-world stories of current and former nobodies, which they themselves submitted to his Web site, http://breakingranks.net. And whereas his previous book sometimes lacked supporting evidence for his claims, Fuller now often backs up his arguments with recent research findings. For example, in discussing the consequences of rankism in health care, Fuller cites a study from University College, London, which found that higher social status generally leads to better health, in part because having a higher rank gives people more control over their lives and reduces stress.

Identifying these types of real-world effects of rankism is the most valuable element of All Rise, precisely because rankism is so pervasive and hard to pin down. And because its victims are by definition powerless “nobodies,” Fuller argues that it’s doubly hard to organize opposition to it. But Fuller, whose own experience in nobody-land led him to this work, argues that precisely because we are all going to be nobodies at some point in our lives, we all have a vested interest in the struggle against rankism.

Fuller at times strays too far afield. Considering how steep an uphill battle he is waging, he is better served by illustrating the everyday damages caused by rankism than by making rather abstract proposals, as he does in his discussion of how to create a dignitarian religion. Ultimately, however, Fuller offers enough practical tools—including a 15-point list of how we can help create a dignitarian society—to make the struggle against rankism seem like a feasible and worthwhile pursuit.