Conversations about race between Black and white friends can feel uncomfortable, but having these discussions may make the friendship stronger, according to new Stanford research. 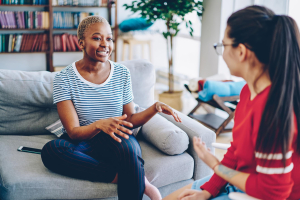 Researchers found that people view conversations with a friend about race as beneficial—they believe they can lead to better understanding, learning, and closeness. But accompanying these positive expectations is a fear that these conversations could go badly, researchers report in a new paper published recently in the Journal of Personality and Social Psychology.

“If people in close relationships do not acknowledge and try to understand race-related parts of each other, they may fail to connect with and support each other in important ways,” the Stanford authors write in the paper. “It is our hope that by surfacing these risks and opportunities the present research can open up pathways for improving communication between cross-race friends.”

This is some of the first research to examine how people approach talking about race-related experiences with friends of a different racial background. To learn more about how people perceive these conversations, study leader Kiara Sanchez, a Ph.D. student in psychology, ran five different studies with a sample of 727 Black and white participants.

Overall, Sanchez found that both groups had identity-specific concerns.

Among white participants, some said they felt that they lacked a common ground on which to have these kinds of discussions. Others were scared they might say the wrong thing or come across as racist.

Black participants also saw possible pitfalls. They said they were more hesitant to talk about their race-related experiences with their white friends than they were with friends of color. They worried that their white friend might dismiss their experience, not understand them, or see them through the lens of a stereotype—even if inadvertently.

“What was striking was that even though both sides felt these concerns, they also wanted to have these conversations,” Sanchez said. “They saw the risks but they also saw a lot of benefits.”

The scholars also found that friendships may be a fitting space to have these conversations. White participants reported they were most at ease with a friend directly sharing their experiences with them, as compared to learning about them from a stranger. “That suggests that conversations about race for white people may be best had with a close friend through disclosure,” Sanchez said.

Sanchez describes the complex tension that arises from race-related discussions as a “threatening opportunity.” She builds on the concept of “stereotype threat,” a term that Stanford psychologist Claude Steele coined to describe the fear a person can have of being viewed by a negative stereotype about the social group to which they belong.

As an undergraduate student at Rice University in Houston, Texas, Sanchez first read Whistling Vivaldi: How Stereotypes Affect Us and What We Can Do, Steele’s seminal book about how stereotypes influence behavior and life outcomes. The phenomena Steele described resonated with Sanchez, who identifies as Mexican American. At the time, she was beginning to understand how people perceived her own racial and ethnic identity, which had never been an issue for Sanchez growing up in Laredo, Texas, a predominantly Latinx town on the U.S.-Mexico border.

“I was aware that I was part of a stereotyped ethnic minority group, but I rarely had experiences that made that salient because I was surrounded by everybody like me,” Sanchez said.

When she started college, meeting and making friends with people from diverse backgrounds, things began to change.

“I started noticing that when I talked about my race and ethnicity, I got different reactions from people, often depending on their race,” said Sanchez. “I quickly become more comfortable talking to my friends who are not white about both the positive things that related to my identity and the negative experiences, like offensive comments I heard, or my own concerns about fulfilling stereotypes about Latinx people. I noticed that it was a little bit harder to talk with my white friends about that—even though I really trusted them in other domains of life. I was close to them, and I cared about them, but I saw a disconnect.”

In reading Steele’s book, she was able to better understand her own experiences. She was so fascinated that she decided to explore cross-race interactions further in her undergraduate studies and now as a Ph.D. student at Stanford. Today, Steele sits on Sanchez’s Ph.D. committee.

Sanchez said she hopes this research will help people better understand the complex feelings that can charge interactions in diverse spaces—whether it’s between teachers and students, among coworkers, or, as Sanchez experienced herself, in forming relationships with people from different backgrounds for the first time in college.

“It’s really about exposing the barriers to people being able to meaningfully connect, and taking a step toward finding solutions that help people of color feel supported and able to express themselves in these spaces,” Sanchez said.

The researchers’ findings also complement decades of research about contact between different groups. “The substance of people’s conversations matters, as well,” Sanchez said.

“Under the right circumstances, positive contact between different groups can lead to less prejudice and more positive, cooperative outcomes. I am interested in stepping beyond that and exploring not just contact, but the content of that contact,” Sanchez said. “Once people are friends, can they talk about and share their experiences openly and authentically?”

Sanchez is now exploring the dynamics when Black friends talk about their race-related experiences with a white friend using a video chat platform. To learn how friends can engage productively, she is measuring what each person gains and how the friendship changes as a result of these conversations.

“It can be awkward at first,” Sanchez said. “But if you remember that a reason it’s awkward is because you care about each other and learning about each other’s experiences, you can stay with it and maybe come out a little wiser, a little more understood, and a little closer.”