The year 2020 has been a rough one, especially for Black Americans. The global coronavirus pandemic’s disproportional impact, combined with multiple police murders of unarmed Black people, cast a brighter light on systemic racism in the United States. In many instances, the killings were caught on phones and the images repeatedly replayed on social media and the news. 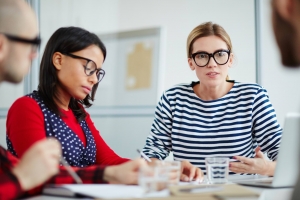 Somewhere around the end of May to early June, corporations sent out public statements en masse in support of Black Lives Matter. Ironically, in the wake of the COVID-19 shutdowns, a couple of months prior, job listings for diversity, equity, and inclusion (DEI) roles had fallen by 60%, but increased by 50% as Black Lives Matter protests spread. Corporations started to hold DEI dialogues inside their organizations to complement their external messaging—perhaps because 69% of Americans believe that corporate messaging about racism is more about pressure from the outside than a genuine commitment against it.

The belief that organizational dialogues on race are the way to go is widespread. When the Josh Bersin Pulse of HR Survey asked over 800 professionals about what their company could do to increase racial justice, the number-one response was to “encourage and engage in dialogue about systemic racism that holds back minorities and women.” Indeed, the DEI firm Vaya Consulting experienced a 1,500% increase in demand for their services in June 2020, compared to June 2019.

But how often do organizations engaging in race dialogues consider the potential harm such dialogues can cause for racial and ethnic minority employees? “First, do no harm” is an ethical principal in the medical field that guides doctors and nurses to pause and consider the potential harm of treatment before proceeding. This same principle could guide the corporate community, encouraging them to approach DEI initiatives, like race dialogues, in full awareness of the potential impact on minority employees. The cautionary principle of “first, do no harm” doesn’t mean that organizations should stop such dialogues, but instead invites a pause for organizational education, introspection, and commitment. Current research and experts in the DEI space support organizations taking a more informed and sustainable approach.

The trauma of racial dialogues

Trauma is “an emotional response to a terrible event like an accident, rape, or natural disasters,” says the American Psychological Association. “Immediately after the event, shock and denial are typical. Longer-term reactions include unpredictable emotions, flashbacks, strained relationships, and even physical symptoms like headaches or nausea.”

Trauma acts as a type of chronic stressor, that when left untreated can produce poor mental and physical health. People who undergo trauma often experience feelings such as negative beliefs about themselves, fear, anger, shame, and hypervigilance. Trauma when recounted can cause the individual to relive the traumatic event, re-experiencing the trauma all over again.

Race dialogues in corporate spaces are ostensibly organized to help improve the conditions for racial and ethnic minority employees, but they may be harming the very groups they aim to help.

“Race dialogues in corporate spaces are ostensibly organized to help improve the conditions for racial and ethnic minority employees, but they may be harming the very groups they aim to help. ”

“What makes race dialogues potentially traumatic is the reality of what we have inherited from this country’s roots in genocide, chattel slavery, and stolen land,” says Nicole Sanchez, the founder and CEO of Vaya Consulting. “Our experiences have direct, modern relationships to that history and continue to be enacted in brutal ways.” On an individual level, racism is not a historical artifact, but instead a current reality.

Research suggests that anger rumination—deep and recurrent thinking about experiences that induce anger—may partially explain this outcome. A research study of 170 Black, Hispanic, and Asian participants found that anger rumination explained the link between perceived discrimination and signs of emotional distress like depressive symptoms, hostility, anger, and aggression in participants.

In addition to being distressing, discussing experiences with racism can be emotionally exhausting for minorities. Participating in these types of conversations is another form of emotional labor performed by racial and ethnic minorities in corporate spaces.

Emotional labor is the management of personal feelings and behaviors to align with institutional expectations, even when dealing with emotionally charged situations. It’s an unpaid and overlooked form of labor that is performed in service to others. In the context of race dialogues in corporations, for minority employees this can translate into sharing some of your most painful experiences for the corporate good, while being careful to manage your emotions so as not to make things awkward for colleagues after the conversation.

Dr. Thema Bryant-Davis, a psychologist at Pepperdine University and author of Thriving in the Wake of Trauma: A Multicultural Guide, explains further:

Not only do we have to educate others on our wounds, but then people want to regulate your emotions, that you shouldn’t be upset as you explain things that are upsetting. Like, this is outrageous, but if I look outraged then that is deemed unacceptable, that I am the problem. People are more concerned about Black people’s anger than the things that we’re angry about. That is exhausting and problematic.

Race dialogues are also fertile ground for the display of microaggressions toward minority employees. Dr. Derald Wing Sue, a Columbia University psychologist, defines microaggressions as “brief and commonplace daily verbal, behavioral, or environmental indignities, whether intentional or unintentional, that communicate hostile, derogatory, or negative racial slights and insults toward people of color.”

According to Sue, there are three main types of microaggressions: microassaults, microinsults, and microinvalidations. Of the three, microinvalidations—communications that negate the experiences of racial and ethnic minorities—are the most likely during race dialogues. In his research, Sue found that when racial and ethnic minorities shared their experiences with racism, often they were “invalidated, dismissed[, and] deluded.” He continues:

If it was an African American man or woman, they would be accused of being the angry Black man or woman. They would be told “that wasn’t my intention,” all in an attempt to deny the experiential reality of people of color. That’s a form of microaggression that invalidates and attacks the racial identity of individuals of color.

For example, stereotypes of Black women as strong and angry can result in a dismissal of their emotional response, says Sue. However, stereotypes of white women—as, for example, being vulnerable and in need of protection—can evoke immediate consolation of their emotional response, shifting the focus of the dialogue to their emotional needs. It’s also the case that the burden of proof is placed on minorities to convince whites that their experiences were race-related and not class, gender, or something else more in line with a post-racial conception of the U.S.

Power imbalance can also show up in the aftermath of race talks. “You’re being asked to be vulnerable and share, and [you] hope that things might be different and then it’s not,” says Dr. Michael Baran, a senior partner at inQUEST, a Chicago-based DEI consulting firm, and coauthor of Subtle Acts of Exclusion: How to Understand, Identify, and Stop Microaggression. Too frequently, minorities participate in race dialogues at a great risk to their mental health and job status, with no follow-up action from the organization to improve workplace conditions for them.

How to make dialogues healthier

So, what should organizations do? Is there a way to talk about race at work that attends to the well-being of employees of color?

In other words, rather than calling on employees of color to recount traumatic experiences with racism, creating situations where they must personally carry the burden of change, organizations should focus on the organization itself. Instead of beginning with dialogues and trainings, organizations can examine the larger structural issues that shape minority experiences in the workplace. To do this, Sue suggests “conduct[ing] a cultural audit of the programs, policies, and practices embedded in the institutions that are biased and macro in nature. Microaggressions impact individuals but macroaggressions, the programs, policies, and practices, affect whole classes of people. They determine who will rise in a corporation and who isn’t going to rise.”

On an individual level, organizations can look for signs of trauma in their minority employees, like depression or anger. “Seeing all of what is happening is depressing, its demoralizing, it decreases your energy,” says Bryant-Davis. “It’s hard to enjoy yourself as you’re seeing the plight, as you’re seeing the terror.” Anger shows up “when there is a goal that is frustrated or denied.” Corporations can train managers and human resources professionals to be able to pick up on signs of distress and offer appropriate support to employees. (This is a skill that can be useful in many contexts, with many kinds of employees, especially in the midst of the pandemic.)

Finally, all the experts interviewed for this article agree that if an organization must move forward with a race dialogue, it should seek the services of a skilled DEI facilitator to conduct such talks. A facilitator who understands the potential for trauma, who can pick up on microaggressions during the dialogue, and who has done the self-work to recognize their own internal biases so that they don’t transpose them onto the dialogue.

The “do no harm” principle requires that organizations aren’t swept into the momentum to just do something, but instead take the time to be thoughtful and committed to building anti-racist organizations. Dialogue is likely to be a part of this initiative, but organizations must do so with the full understanding of what they are asking their racial and ethnic minority employees to give—and be equally committed to giving back.