In my clinical training, I learned the short-cut diagnosis for a narcissistic personality was someone who could never say “thank you” or say “I’m sorry.” You may encounter people like that on a daily basis; you may work for them or live with them. 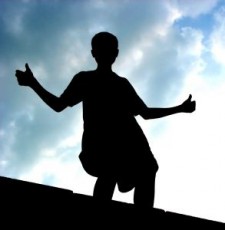 Narcissists also struggle to forgive, instead seeking vengeance on the transgressor, or perhaps just avoiding them. But a recent study published in Personality and Individual Differences suggests that, when it comes to forgiveness, not all narcissists are a lost cause. Instead, the researchers suggest, there are different types of narcissists, and some of them might have a greater capacity to forgive than others. The key is empathy.

The study, conducted in Germany in 2014, first teased out differences between two different types of narcissism, one characterized by feelings of admiration and one characterized by feelings of rivalry. Admiration is the propensity for assertive self-enhancement by means of self-promotion (“I am great”) and is considered by researchers to be more adaptive—the “bright side” of normal narcissism. Rivalry is the propensity for antagonistic self-protection by means of self-defense (“I want my rivals to fail”) and is considered to be less adaptive—the “dark” side of normal narcissism.

Ramzi Fatfouta and colleagues then looked at whether anger, rumination, and reduced empathy—states associated with the inability to forgive—might predict differences in forgiveness between the two different types of narcissists, people with either the admiration or rivalry styles of narcissism.

The researchers found that people with the admiration style were significantly more likely to be able to experience empathy for the person who hurt them, less likely to remain angry or ruminate about the transgression, and more able to offer forgiveness.

On the other hand, people with the rivalry style were more likely to want to take revenge on or avoid the person who hurt them, and thus are more likely to remain angry, carry a grudge, and less likely to feel the empathy for the other person’s behavior that could lead to forgiveness.

Further analysis revealed that empathy for the transgressor was the key to explaining why some narcissists forgave while others did not.

What does that mean for people living with or working with other people whose narcissistic defenses are triggered by social rejection? Most of us feel hurt when we experience social rejection—it’s normal when a friend doesn’t return a phone call or a spouse ignores us at a party. In both admiration and rivalry styles, narcissistic defenses can render the hurt invisible to other people and even to the narcissist themselves (“I am NOT angry!”). It’s hard to experience empathy when feelings are buried—and yet seeing the transgression and identifying the hurt feelings is key to forgiveness.

So what can we do? In my 20 years of providing therapy for individuals and couples, I have found that the only way to increase someone’s empathy and thus openness to forgiveness is for me to be unfailingly empathic with them, with the hurt and pain they feel underneath those automatic defenses of entitlement, self-enhancement, and aggression when experiencing social rejection. In other words, I never confront the defenses head on, that would only cause the person to become more defensive. Instead I try to model the quality that I’m trying to bring out in them.

This isn’t easy when I feel undervalued by their narcissistic qualities. But I use my empathy to feel into the hurt and pain that drives the need for those narcissistic defenses: “I want my rivals to fail” or “I am great.”

I may first offer empathy for the anger that is the obvious presenting emotion and that I imagine is covering over the hurt underneath. “Of course, given the way you perceived Johnny’s behavior, it’s completely understandable that you would feel the way you do.” And then inquire whether there are any other feelings besides the anger.

If I’m working with someone I sense has the “I am great” style of narcissism, I might lean with them toward how great it is that they can self-reflect and explore their own inner experience which just might help them empathize with the other person’s experience as well.

If I’m working with someone I sense has the “I want my rivals” (or even me as the therapist) “to fail” style, I might acknowledge their strengths in protecting themselves, validating their anger as an important fuel for that sense of strength, not to be set aside lightly. And then explore with them what else they might be feeling if they set the anger aside, even temporarily.

If my understanding and empathy for the anger is sincere enough, the being seen and validated, not judged or rejected, may soften the defenses enough for the person to acknowledge (however briefly) that yes, there are other feelings as well. Being seen in their own humanity, feeling the acceptance of empathy, eventually will allow the narcissist to perceive the confusion, fear, hurt and anger that caused the transgression in the other person, too.

Of course, it is easier for me, as a therapist, to adopt this approach. It is far more difficult if it is your spouse or sibling who is a narcissist. It’s a separate but very helpful suggestion to maintain your own self-compassion for yourself—it is not easy and can be painful to be at the effect of someone else’s narcissistic defenses. In dealing with the admiration style, positive encouragement for any behaviors in the right direction, helping the person to feel great by feeling worthy of positive attention, and sidestepping (declining to reinforce) the negative can help the person move their perception of the transgressor, even yourself, as also worthy of some understanding and forgiveness.

In dealing with the rivalry style, I suggest trying to help the person maintain their sense of strength by being “big” enough to stay engaged and see the other person’s point of view, which could allow them to maintain a sense of strength even while opening the door to understanding and forgiveness.

Deep empathy for how challenging it is to be a human being can create a sense of common humanity that can open the door to dropping the grudge and forgiving.